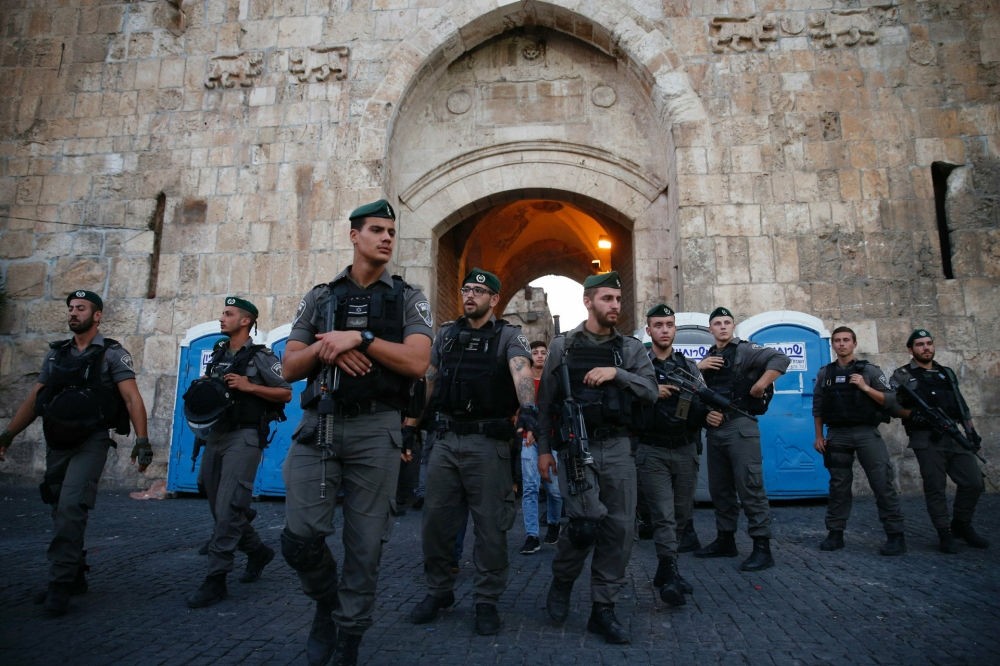 Israeli security forces stand guard as Palestinian worshippers pray next to the Lions Gate, a main entrance to the holy site in Jerusalem's Old City, in July 18.
by Yusuf Selman İnanç Jul 20, 2017 12:00 am

Following an attack that left two Israeli policemen dead, the Israeli government's installation of security cameras and x-ray machines has sparked outrage among Palestinians, who claimed the security measures have turned Jerusalem into a ghost city

"It is like a ghost city," an Italian national, who has been living in Jerusalem for three years, told Daily Sabah in an anxious and worried tone. Asking her name remain anonymous, she said she had never seen the city like this, and everyone was still shocked that a deadly incident had taken place near Al-Aqsa mosque.

She was worried because Jerusalem witnessed heightened tension following an attack that killed two Israeli Druze policemen by three Israeli Arabs. After five decades, Al-Aqsa compound was closed to prayer. The last Friday prayers ceremony was held outside the compound. While Muslims were not let in, several Israeli ministers, bureaucrats and citizens entered Islam's third holiest site to conduct an investigation. The circulating rumors that Israel would like to split Al-Aqsa in two and allocate a place for Jewish worshippers has worried Muslims that still remember how Al-Khalil Mosque in Hebron was divided in 1994 after a Jewish attacker killed 29 Muslims during prayer. Like in Hebron, the Israeli state has installed x-ray machines and security cameras inside the compound. Although Jordan is responsible for the services of the compound, Israel has been violating the agreement.

The installation of security cameras and x-ray machines is an unprecedented move for monitoring inside the compound. Muslims have refused to enter the compound even though it is open to prayer now.Reha Ermumcu, culture and art director at the Yunus Emre Institute, said: "It has never been this bad. After 50 years, this is the first time that Al-Aqsa has been closed. Israeli policemen, ministers, bureaucrats as well as ordinary citizens have entered inside. Some gates are still closed. The situation is terrifying." Pointing out claims that the attack was outside of the compound but was portrayed as if it happened inside, he said: "Israel finally has obtained what it wanted. They have installed cameras and other security machines. This attack has been a very precise pretext for them."

Since the attack occurred, Israeli police have stopped Arab Jerusalem residents from entering the Old City. "They didn't even allow tourists into the Old City. I had to wait for half an hour at a checkpoint for security checks although I live in the Old City. I had to shout at the police to let me in since my home is in the Old City, and I carry a diplomatic passport," Ermumcu said. "It was worse in the first days. The roads and shops were closed. There was nobody outside. Now, we are worried. There are clashes near the compound. The police use rubber bullets that seriously injure people," he added.

The Italian national said there were extra security measures everywhere. "They, the police, stop me every 10 meters for a search. They point their guns directly at people. Life is more difficult for Palestinians since they are not allowed to walk freely in the city," she said.

Palestinians are angry at the imposition of security measures in the compound. Jerusalem Grand Mufti Mohammed Ahmed Hussein criticized the new measures, saying it was an attempt to alter the status quo. Similarly, religious authority in Jordan also criticized Israel and pointed out that control of the compound belongs to Jordan.

Israeli Prime Minister Benjamin Netanyahu took the decision to close the compound temporarily and install the security measures yet stated he does not intend to change the status. "He also spoke by phone with Jordan's King Abdullah II on Saturday night before leaving on a trip to France and Hungary. Abdullah condemned the attack, but also called on Netanyahu to reopen the Al-Aqsa compound and stressed the need to avoid any escalation at the site," AFP reported. Palestinian President Mahmoud Abbas also condemned the attack and talked to Netanyahu over telephone. The Palestinian government was more prudent over the incidents but also called for combating the Israeli decisions. Hamas and Islamic Jihad issued harsh messages and claimed that Israel aims to destroy Al-Aqsa Mosque. A previous plan in 2015 to install cameras failed because Jordan and Israel could not agree on how to operate them.

The Israeli government seems determined to not remove the cameras and x-ray machines. On Friday, bigger protests and clashes are expected since Muslims have said they would not enter the compound unless the machines are removed.