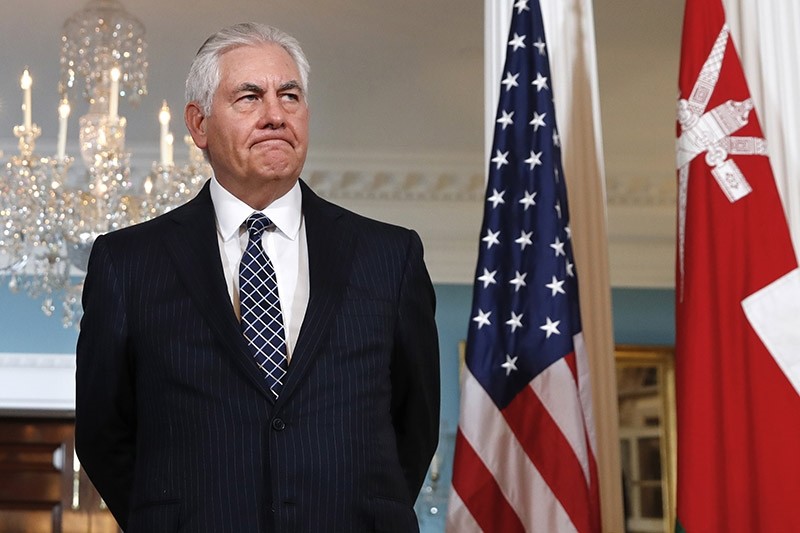 Secretary of State Rex Tillerson, finishes answering a question from the media while meeting with Oman's Foreign Minister Yusuf bin Alawi bin Abdullah, Friday, July 21, 2017, at the State Department in Washington. (AP Photo)
by Daily Sabah with Reuters Jul 21, 2017 12:00 am

U.S. Secretary of State Rex Tillerson said on Friday the United States was satisfied with Qatar's efforts to implement an agreement aimed at combating terror financing, and urged Arab states to lift a "land blockade" on the emirate.

Tillerson shuttled between Gulf countries last week to convince them to help ease the worst regional dispute in years but left the region without any firm signs the feud would be resolved soon.

While in the Gulf, Tillerson signed an accord with Qatar on terrorism financing in a bid to ease the crisis, but Qatar's opponents said it fell short of addressing their concerns.

"They have been very aggressive in implementing that agreement, so I think we're satisfied with the effort they're putting forth," Tillerson told reporters just before meeting with Omani Foreign Minister Yusuf bin Alawi bin Abdullah at the State Department.

Tillerson said Qatar was willing to sit with the four countries to discuss their demands, but that it was important to Doha "that the sovereignty and dignity of all five countries be respected in those discussions."

In a move to counter the four states' accusations, Qatar has set rules for defining terrorism, freezing funding and terrorism financing and established national terrorism lists.

In one of the first positive signs from the four Arab states since they imposed the sanctions last month, the United Arab Emirates on Friday welcomed Qatar's decision to amend its anti-terrorism laws.

The four states cut diplomatic, transport and commercial ties with Qatar, disrupting the import of food and other items and causing foreign banks to scale back business with Qatar.

"I hope the four countries will consider as a sign of good faith lifting this land blockade which is really having the most, I think, negative effects on the Qatari people," Tillerson said.