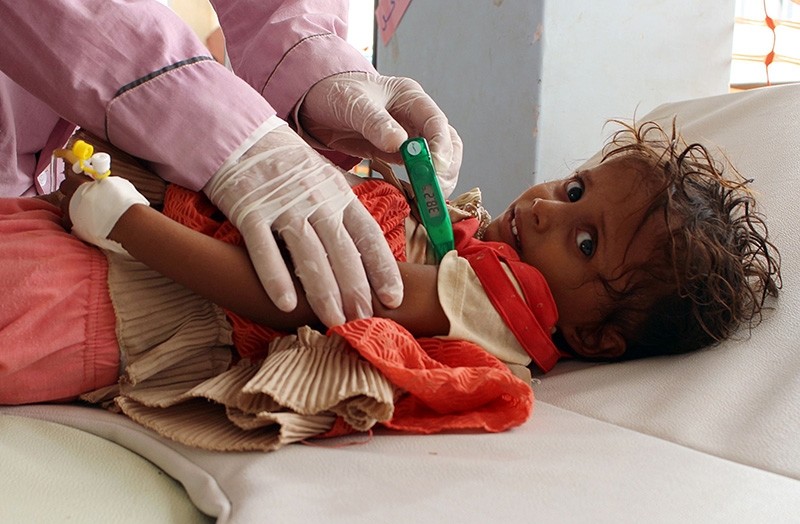 A Yemeni child suspected of being infected with cholera is checked by a doctor at a makeshift hospital operated by Doctors Without Borders (MSF) in the northern district of Abs in Yemen's Hajjah province , on July 16, 2017 (AFP Photo)
by Jul 23, 2017 12:00 am

Cholera cases in Yemen are expected to at least double by the end of 2017 to more than 600,000, the International Committee of the Red Cross said Sunday, as the charity's president visited the war-ravaged country to assess the worsening crisis.

"The great tragedy is that this cholera outbreak is a preventable, man-made humanitarian catastrophe," said ICRC President Peter Maurer.

"It is a direct consequence of a conflict that has devastated civilian infrastructure and brought the whole health system to its knees," he added in a statement.

The fighting, which started in 2014 and intensified in March 2015, when the Houthis advanced on Hadi's southern power seat of Aden, has devastated the country's infrastructure.

The ICRC said less than 45 percent of the country's medical facilities are operational, while others are only partially functioning.

Cholera, which is contracted through contaminated water and causes severe diarrhea and vomiting, is easily treatable and preventable. But the disease can kill within hours if left untreated.

According to the World Health Organization, around 3,200 people have been infected in the past three months and more than 1,800 have died.

Other infectious diseases such as malaria and dengue fever are also going untreated due to a lack of resources, the ICRC warned.