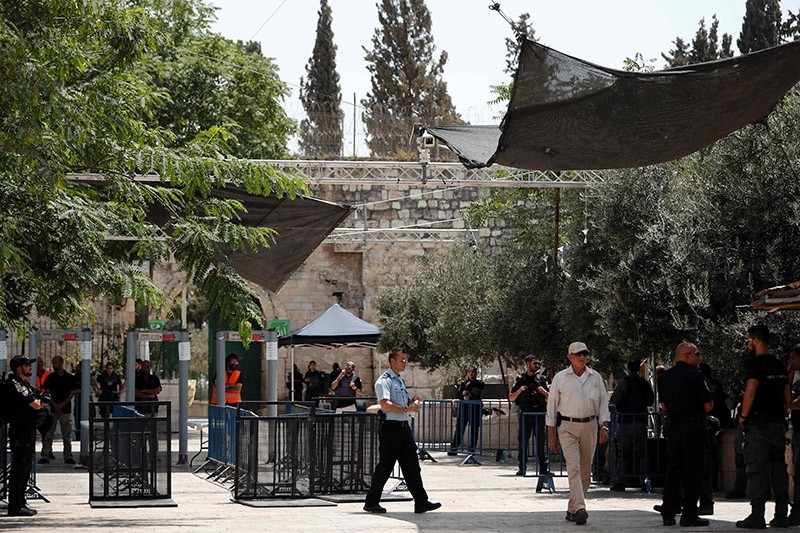 A picture taken on July 23, 2017, shows security measures installed by Israeli authorities, which include metal detectors and cameras outside Lions' Gate, a main entrance to Al-Aqsa Mosque compound in Jerusalem. (AP Photo)
by Compiled from Wire Services Jul 23, 2017 12:00 am

Israel will not remove metal detectors whose installation outside Al-Aqsa Mosque compound in Jerusalem has triggered the bloodiest confrontations with the Palestinians in years, but could eventually reduce their use, Israeli officials said Sunday.

With Israeli generals warning the violence may spiral, Prime Minister Benjamin Netanyahu is considering alternatives to the walk-through gates placed at entrances to Al-Aqsa after two policemen were shot dead there on July 14.

But the rightist Netanyahu government is wary of being seen to capitulate to Palestinian pressure at the site, which Jews revere as the vestige of their two ancient temples and which was among East Jerusalem areas Israel captured in a 1967 war and annexed as its capital in a move not recognized internationally.

"[The metal detectors] will remain. If [Palestinians] do not want to enter the mosque, then let them not enter the mosque," Tzachi Hanegbi, Israeli minister for regional development and a senior member of the ruling Likud party, told Israel's Army Radio.

Meanwhile, Israel installed new security cameras Sunday at the entrance to a sensitive Jerusalem holy site, as officials began indicating it was considering "alternatives" to the metal detectors.

However, the Grand Mufti of Jerusalem Mohammed Hussein told the Voice of Palestine he demands a complete return to procedures that were in place before the initial attack at the shrine, known to Muslims as the Noble Sanctuary and to Jews as the Temple Mount.

In a statement Sunday, the Islamic institutions in Jerusalem, of which he is a part, said they "affirm the categorical rejection of the electronic gates and all the measures of occupation."

"We stress our absolute rejection of the electronic gates, and of all measures by the Occupation (Israel) that would change the historical and religious status in Jerusalem and its sacred sites, foremost the blessed Aqsa mosque," the Palestinian grand mufti, the acting Palestinian chief justice and the Jordanian-sponsored Waqf religious trust said in a joint statement.

The crisis has resonated internationally. The U.N. Security Council is holding closed-door talks today about the spiraling violence after Egypt, France and Sweden sought a meeting to "urgently discuss how calls for de-escalation in Jerusalem can be supported."

Russia, the U.S., the EU and the U.N., the so-called quartet of Middle East peace mediators, said in a joint statement they were "deeply concerned by the escalating tensions and violent clashes taking place in and around the Old City of Jerusalem," calling for restraint on all sides.

Pope Francis said on Sunday he was alarmed by the recent violence in Jerusalem and called for dialogue and moderation to help restore peace.

"I am following with trepidation the grave tension and violence of recent days in Jerusalem. I feel the need to express a heartfelt call for moderation and dialogue," the pope told pilgrims gathered under the blazing sun in St Peter's Square. He called for prayers in the hope that all sides would come forward with proposals for "reconciliation and peace."

Protests erupted in Jerusalem last week, after the mosque's leadership spoke out against metal detectors that were installed following a gun attack on July 14 that left three Palestinians and two Israeli police officers dead.