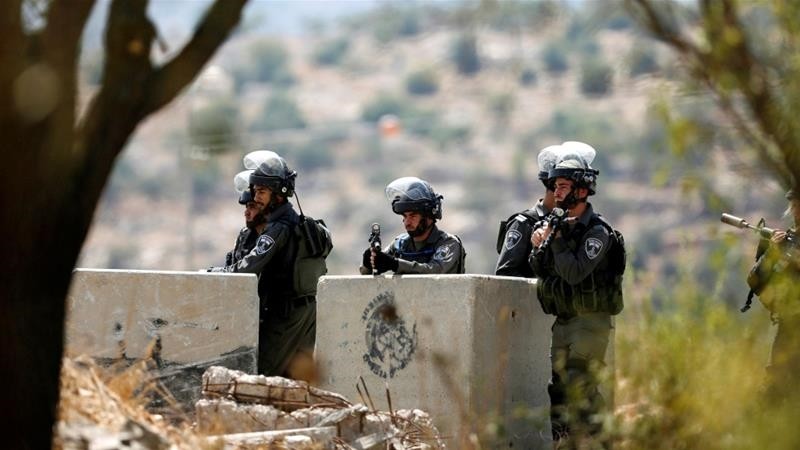 Israeli forces this time targeted students, who were protesting the restrictions imposed on worship in the Al-Aqsa mosque. Police used real bullets against the students, who are now in stable condition

Israeli security forces injured four civilians on Monday after using real bullets against a crowd protesting against worship restrictions illegally imposed on the Al-Aqsa Mosque compound by the Jewish state.

According to a statement released by the Palestinian Health Ministry, the wounded were students and are currently in stable condition.

The forces also used tear gas and rubber bullets against the protesters.

The Al-Aqsa Mosque is the third holiest site in Islam after the holy cities of Mecca and Medina.

The spiritual leader of the Al-Aqsa Mosque, Sheikh Ikrima Sabri, was also injured by Israeli forces on Tuesday, this time by a plastic bullet after praying outside the gates of the site.

Anger has spilled across the West Bank since last week when Israel shut the holy mosque, following a deadly shootout.

The Al-Aqsa was reopened after a two-day closure, with Israel installing metal detectors and cameras at the mosque's gates that Palestinians say aim to change the status quo -- a delicate balance of prayer and visiting rights.

In addition to illegally seizing land from Palestine, the rightful owner of the occupied West Bank, Israel has also imposed another illegal measure against the country already reeling from oppression: the blockade of the Gaza Strip.

Hamas is a Palestinian resistance group and runs the Gaza Strip. The West Bank, a portion of land most of which is under illegal Israeli control, is de jure under Palestinian Liberation Organisation (PLO) control, with Mahmoud Abbas being the president of the State of Palestine.

Despite efforts to ease the Israeli siege on Palestinian territory, the effects of the Gaza war continue as Gazans are still in desperate need of medical and humanitarian aid. During the 50-day Israeli offensive in 2014, Gaza's infrastructure was heavily damaged. Furthermore, a lack of fuel and the bombing of the strip's only power plant led to an electricity crisis in the city.

Since the start of Israel's occupation in 1967, the figures show that the number of internally displaced people (IDPs) in Gaza Strip and the rest of Palestine reaches to 475,000. This means that nearly 25 percent of Gaza's 1.8 million population has forcibly displaced within the small territory of occupied Palestine.

Also, prior to the 2008 Gaza war, at least 129,000 Palestinians were reportedly displaced between 1967 and 2009, as a result of the demolition of their homes and livelihood. Displacement in Occupied Palestine is not a choice but an obligatory fact for all Palestinians as they have been forcibly displaced as their lives have been threatened by the ongoing Israeli assault on Gaza.

More than 300 Palestinians have been killed in alleged attacks on Israelis or in clashes with Israeli forces since October 2015, according to Palestinian figures.

Israeli authorities say nearly 50 Israelis have been killed in attacks by Palestinians during the same period.