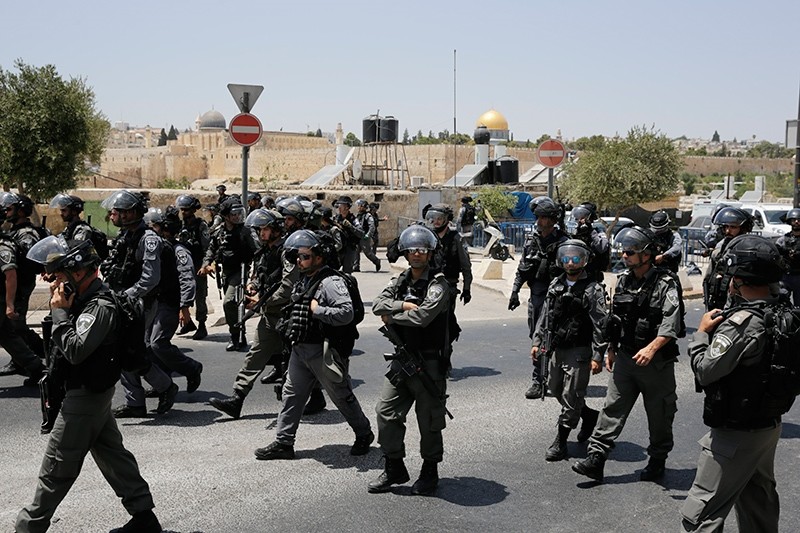 The Foreign Press Association (FPA) in Israel filed a petition with the Israeli Supreme Court Wednesday, accusing the Israel police of using violent tactics against journalists and improperly restricting media access to the occupied East Jerusalem.

"We are seeking an end to the violent tactics often used by police and guarantees that we can cover the news freely, safely and securely," the FPA said in a statement.

The FPA said police verbally and physically harassed journalists and barred some media from entering East Jerusalem, while tourists where given access to the area.

Many reporters were forcibly removed from the area near Haram al-Sharif, or Noble Sanctuary, known to Jews as Temple Mount, including television crews from the Rai and Al Jazeera television stations, FPA Executive Director Glenys Sugarman said.

Reuters cameraman, Sinan Abu Maizer, was allegedly beaten by police and suffered a concussion while filming clashes in Jerusalem.

Jerusalem Police District Commander Yoram Halevi told the press last week that the restrictions were to protect the journalists from the clashes.

Dozens of reporters descended upon Jerusalem last month as violent clashes between police and Palestinian protesters played out in the streets.

Anger has spilled across the West Bank since Israel shut Al-Aqsa Mosque compound following a deadly shootout on July 14. The site is venerated by Muslims as Haram al-Sharif, or Noble Sanctuary, and Jews, who call it the Temple Mount.

The mosque was reopened after two days, with Israel installing metal detectors and cameras at its gates.

The mosque was reopened after two days, with Israel installing metal detectors and cameras at its gates. Despite calls from the Islamic world to not to offend worshippers and return to the status quo, Israel refused to remove the detectors, claiming the security measures were similar to procedures taken at other holy sites around the world.

But facing international criticism and pressure, Israel's Security Cabinet decided late Monday to remove the metal detectors. A statement released after the meeting said a new surveillance system using "smart checks" based on advanced technology would be put in place.

Jerusalem is sacred to Muslims, Jews and Christians, and the Al-Aqsa Mosque is the Islamic world's third holiest site behind the Kaaba in Mecca and al-Masjid an-Nabawi in Medina.

A spokesman for the Israeli police did not return a request for comment on the FPA petition.