Over 1 million malnourished children in Yemen at risk of cholera 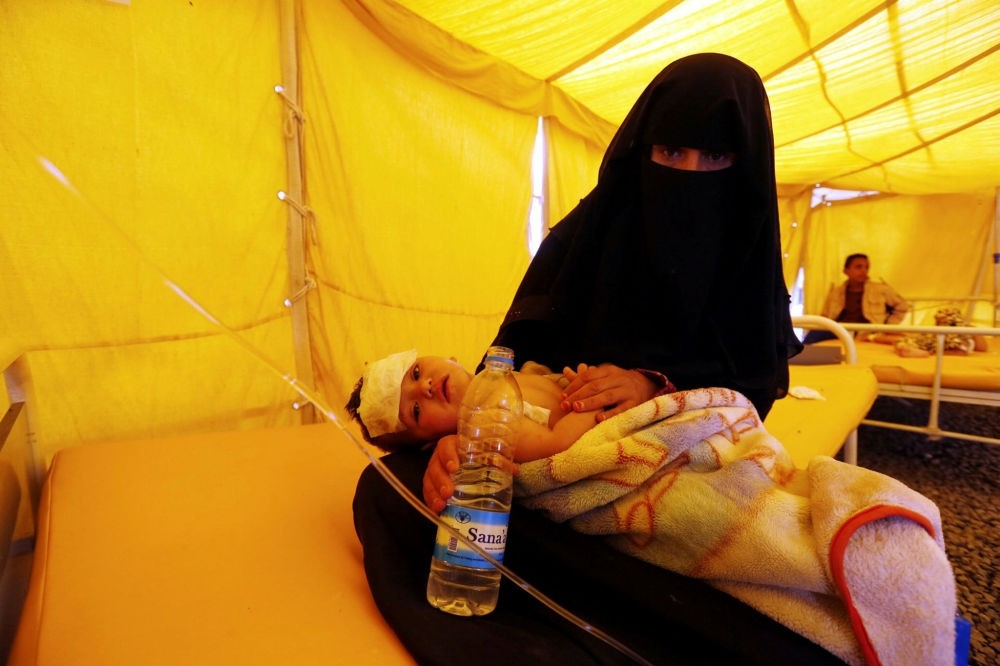 A Yemeni woman holds her cholera-infected child inside a makeshift tent at a hospital in Sanaa, Yemen, July 22.
by Compiled from Wire Services Aug 03, 2017 12:00 am

More than one million malnourished children aged under five in Yemen are living in areas with high levels of cholera, the charity Save The Children warned yesterday as it began sending more health experts to the worst hit areas.

The scaling up in response came after latest figures show that a deadly cholera epidemic that started in April 2015 has infected more than 425,000 people and killed almost 1,900.

Save the Children said children under the age of 15 are now accounting for about 44 percent of new cases and 32 percent of fatalities in Yemen where a devastating civil war and economic collapse has left millions on the brink of starvation.

"The tragedy is both malnutrition and cholera are easily treatable if you have access to basic healthcare," said Tamer Kirolos, Save the Children's Country Director for Yemen.

"But hospitals and clinics have been destroyed, government health workers haven't been paid for almost a year, and the delivery of vital aid is being obstructed."

Cholera, which is spread by ingestion of food or water contaminated by the Vibrio cholerae bacterium, can kill within hours if untreated. The cholera outbreak prompted the United Nations last week to revise its humanitarian assessment and it now calculates 20.7 million Yemenis are in need of assistance, up from the previous figure of 18.8 million in a population of 28 million. Oxfam has projected the number of people infected with cholera could rise to more than 600,000 - "the largest ever recorded in any country in a single year since records began" - exceeding Haiti in 2011.

Yemen, which is on the southern edge of the Arabian Peninsula, has been engulfed in civil war since September 2014, when Houthi Shiite rebels swept into Sanaa and overthrew President Abed-Rabbo Mansour Hadi's internationally recognized government. In March 2015, a Saudi-led coalition, backed by the United States, began a campaign against Houthi forces allied with ousted President Ali Abdullah Saleh in support of Hadi's government. Since then, the Iranian-backed Houthis have been dislodged from most of the south, but remain in control of Sanaa and much of the north.

Millions are malnourished in Yemen where famine looms, the United Nations says. The crisis in Yemen that has left millions hungry and on the brink of famine is "a man-made disaster" driven not only by decades of poverty and lack of investment but also by economic strangulation being used as a tactic of war, the U.N. development chief in the country said Tuesday.

Auke Lootsma said90 percent of Yemen's food is imported "so imports are crucial," and at the moment getting food into the country is difficult because there are few commercial importers, they face financing challenges including getting credit, airports are closed to commercial flights and there are difficulties at ports.

"Foreign exchange reserves are depleted and the country is facing a liquidity crisis as well as a hard currency shortage," he added.

But Lootsma said the food crisis is mainly driven by the impact of increased food prices, and especially the reduction in purchasing power of Yemenis, many who were living in poverty before the conflict began.

"So although food may be available in the market it is financially out of reach for many of the poor families at this point of time," Lootsma said.

Yemen is like "a bus racing towards the end of a cliff," he said. "Instead of hitting the brakes and turning around, the one that controls the bus keeps going and pushes the accelerator, all but certain to crash." Lootsma said the most important need is stopping the war.