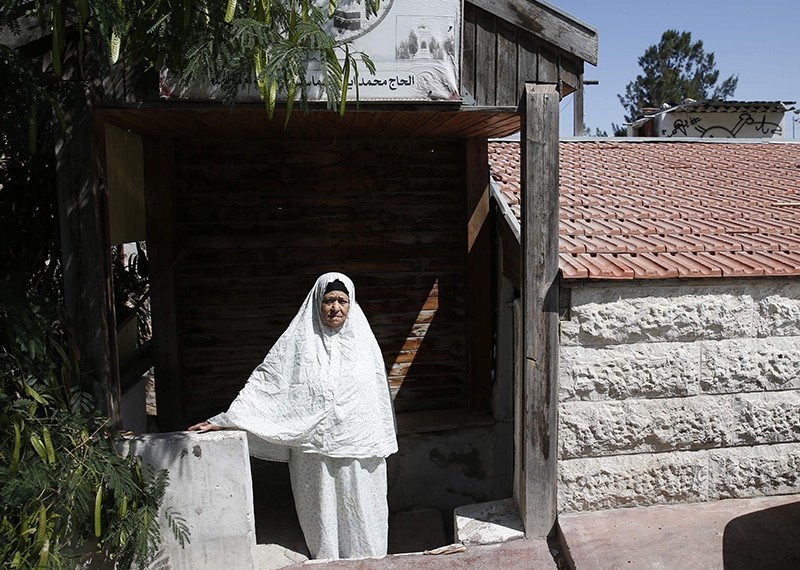 Palestinian Fahamiya Shamasneh stands outside her family house in the occupied east Jerusalem neighbourhood of Sheikh Jarrah on August 1, 2017, despite a looming deadline for evacuating the home she has lived in for more than 50 years. (AFP Photo)
by Aug 06, 2017 12:00 am

Fahamiya Shamasneh, a 75-year-old Palestinian woman, refuses to pack her things despite a looming deadline for evacuating the home she has lived in for more than 50 years.

Israel's supreme court has ruled the family have until Wednesday to vacate the house in the occupied east Jerusalem.

The family's supporters have no doubt the house will be handed over to Jewish Israelis, as part of a wider plan to boost illegal Jewish settlements in the predominantly Palestinian neighborhood of Sheikh Jarrah.

It will be the first eviction in the neighborhood since 2009, according to Israeli anti-occupation group Peace Now, and has become part of a fight over the disputed status of Jerusalem.

Israel sees the city as its undivided capital, while the Palestinians want the eastern sector as their future capital.

Fahamiya, her sick husband Ayoub, 84, their son and his family have until August 9 to voluntarily leave the cramped,50-square-meter (540-sq-foot) basement of their building or be forced out.

"Fifty-three years here means leaving is not easy -- it is a lifetime. I was a young girl when I came to this house," said Fahamiya.

"The police are threatening us. We don't know what to do," she said, adding they had not found anywhere else to go.

Under a decades-old Israeli law, if Jews can prove their families lived in east Jerusalem homes before the 1948 war that led to the creation of Israel, they can demand that Israel's general custodian office release the property and return their "ownership rights."

No such law exists for Palestinians who lost their land.

Israel occupied east Jerusalem in the Six-Day War of 1967 and later annexed it in a move never recognized by the international community.

The Shamasneh family says it has paid 250 shekels ($70) a month to the general custodian since 1967, an arrangement used by the pro-settlers' side as proof that the family recognized their status as tenants.

In 2009, the Israeli settlers along with the general custodian launched a legal process to force the family out, but the claimants later sold their rights to a U.S.-registered company, according to Peace Now.

The NGO says such companies are often used to make it unclear exactly who is behind the push to evict people, a highly-charged political act.

Arye King, director at the Israel Land Fund and a de facto spokesman for much Jewish settlement growth in Jerusalem, denied any legal misconduct.

"This house is not changing hands -- it has belonged to Jews for about 90 years and it is returning to the owners after some people rented it," he told AFP.

In 2013, Israel's high court rejected an appeal by the family in favour of the claimants, concluding the family were not protected tenants.

"We will not leave of our own will. Maybe if they force us, carry us and throw us on the streets, then we'll go. But for us to lock the door and tell them 'here are the keys,' that's impossible," she said.

Peace Now says the house is part of a "larger process the government is undertaking of establishing settlements in Sheikh Jarrah".

King, who does not dispute that, said the district is "going back to being a Jewish neighborhood".

"It is happening slowly, slowly but thank God we are succeeding in returning Jews to the place they ran away (from) when the Jordanian legions bombed their houses," he told AFP.

Fahamiya laughs at the idea of Jewish heirs, saying she lived there for decades without any mention of any legal owners.