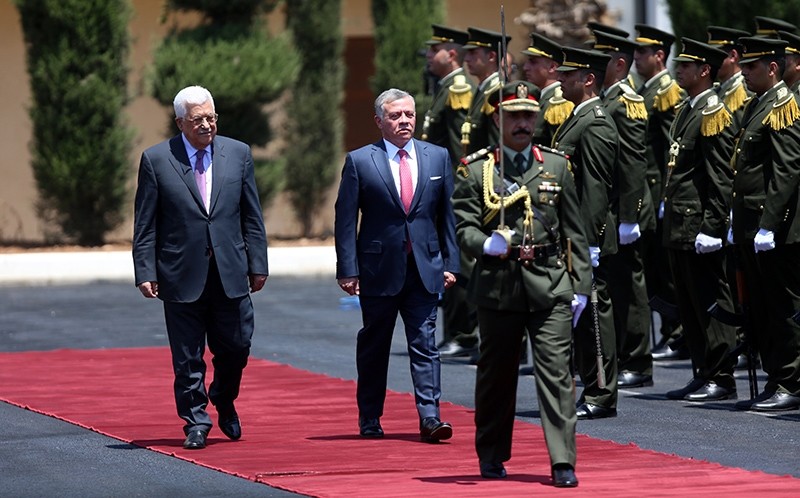 Jordanian King Abdullah II arrived by helicopter for a meeting with Palestinian President Mahmoud Abbas on Monday following a crisis over one of Jerusalem's most important holy sites last month.

King Abdullah arrived in the West Bank city of Ramallah for talks on regional developments and the recent crisis at Al-Aqsa mosque, where Palestinians successfully protested against Israeli security measures introduced after a deadly shootout in July, according to the official Palestinian news agency Wafa.

Jordan retains custody of the mosque through an Islamic endowment, known as the Waqf, and the Jordanian monarch announced last week that he would be donating $1 million to its Islamic Museum, 300 Jordanian dinars ($423) to Waqf employees and be making a special payment to certain guards.

The two-week protests, primarily directed against metal detectors installed at entrances to the holy site, were called by Jerusalem's local religious authorities, many of whom are Waqf employees but were widely perceived as having acted independently.

They refused to enter the mosque and called on worshippers to do the same until the security measures were removed-a demand the Israeli government eventually conceded.

As the custodian Jordan reacted angrily to the new measures, while Palestinians responded with days of protests.

The tensions were exacerbated on July 23 when an Israeli security guard shot dead two Jordanians at the Israeli embassy compound in the capital Amman.

One of the two men allegedly attacked the Israeli with a screwdriver, while the other was apparently shot dead by accident, according to Israeli officials.

"Without the Hashemite custodianship [of Al-Aqsa] and the steadfastness of the Jerusalemites, the holy sites would have been lost many years ago," he said, according to the official Petra news agency.

Jordan has remained responsible for Al-Aqsa since 1967, when it lost control of occupied East Jerusalem and the West Bank to Israel during the Six-Day War.

The holy site is also revered by Jews, who call it the Temple Mount, but prayer and visiting rights have been managed under a delicate system known as the "status quo" which only allows Muslim worship at the site.