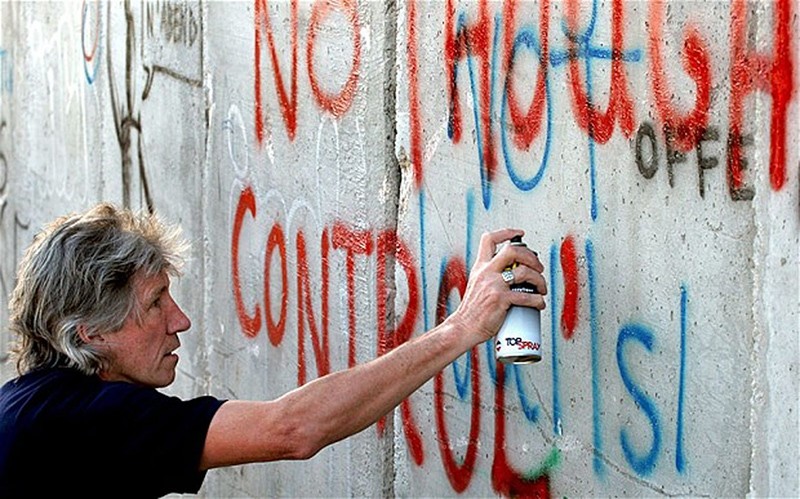 British rock musician and Pink Floyd co-founder Roger Waters spray-paints the words ,No Thought Control, on a section of what Palestinians call Israel's ,apartheid wall, in the West Bank town of Bethlehem, June 21, 2006. (AP Photo)
by Daily Sabah Aug 10, 2017 12:00 am

Popular progressive rock band Pink Floyd's co-founder and singer Roger Waters urged participation in the Boycott, Divestment and Sanctions (BDS) movement for Palestinian rights in an interview with RT, part of which was published Thursday.

Waters' call comes as another rock band Radiohead refused to participate in the BDS movement and gave a concert in Israel in July.

The BDS campaigners, including Waters, asked Radiohead to cancel its gig in Tel Aviv as a sign of protest against Israeli oppression of Palestinians in the wake of the 50th anniversary of Israel's occupation of Palestine.

Waters said that performing in Israel means endorsing its government and its policies against Palestinians.

According to Yorke, playing somewhere does not necessarily mean endorsing the local government. He said that his band does not endorse President Donald Trump, yet still performs in the U.S.

Pink Floyd legend responded by saying that Israel's case was different from the others.

"Thom Yorke is wrong about not endorsing the policies of the Israeli government by playing there. Spokespersons of that government have said how excited they are that this is the best thing that's happened for their hasbara (the Hebrew word for "propaganda"), which is the explaining to the rest of the world what a wonderful and precious democracy Israel is," Waters said.

Waters equaled performing in Israel to making a public statement about endorsing the Israeli government, "because that is what will be reported in Israel, and that is what gets reported around the world."

Waters added that performing in the U.S. during Trump presidency is OK because American civil society has not called on the artists from the outside to not come, while Palestinian civil society came together and organized the BDS movement.

When asked about the lack of coverage the BDS receives, the Pink Floyd singer answered by saying that "it comes from above."

"You can figure it out for yourself. It's not rocket science," Waters said.

Boycott, Divestment and Sanctions is a Palestinian-led movement that lobbies for the boycott of Israel and its products over the occupation of Palestinian land. It says on its website that BDS was "inspired by the South African anti-apartheid movement."