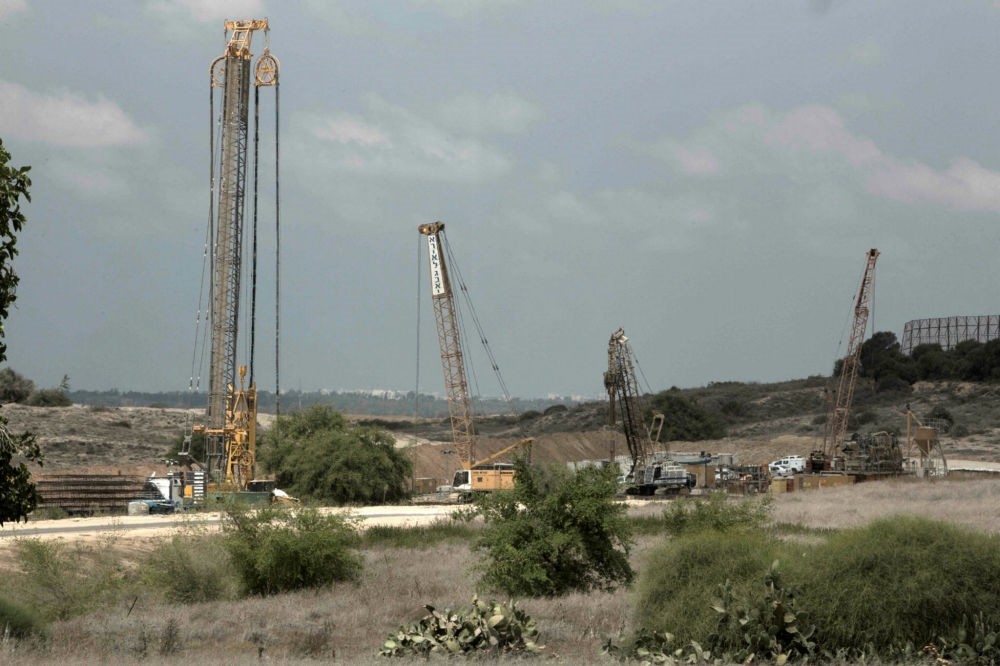 Israel pushes forward on a project to build a giant underground wall surrounding the Gaza Strip.
by Yusuf Selman İnanç Aug 12, 2017 12:00 am

Israel plans to build a sensor-equipped underground wall alongside its 60-kilometer border with Gaza. The Israeli media said the wall is planned to prevent smuggling tunnels. Gazans smuggle raw materials, oil and other basic needs through tunnels due to the blockade imposed by Israel. Reports in Israeli media say it will take two years to complete the construction at a cost of $1.1 billion. The underground wall is expected to be meters deep and stand 6 meters above ground.

Israel says that Hamas uses these tunnels to smuggle the necessary materials to make rockets. In the 50-day Israeli aggression in Gaza that left more than 2,000 dead, at least 10 rockets were fired from Gaza killing 12 Israeli soldiers. However, Israel utilizes its Iron Dome in order to counter primitive rockets.

The underground wall is expected to worsen the situation in small, densely populated Gaza City. Due to the lack of electricity, people predominantly rely on gasoline-fueled generators and solar panels to keep their refrigerators running and to have access to hot water. Considering that oil prices are high due to the blockade, Gazans are in a dire situation. Therefore, hundreds of people engaged in a protest against Israel and the Palestinian Authority (PA) as international rights groups warn that there might be a total collapse of basic services. With only three hours of electricity available per day, the U.N. warned that half of Gaza's population is in need of humanitarian aid. Israel said it would reduce electricity supplies after the PA limited its payments for power. "Only 3% of the water in Gaza is suitable for consumption, with just 10% of the population having access to safe drinking water. This is due to high salinity and damaged sewage systems following repeated military offensives, which are now unable to function with the lack of electricity and are pumping raw sewage into the sea," Open Democracy reported on Friday.

William Bell, Christian Aid's acting head of the Middle East, told Open Democracy: "95% of the tap water is nearly as salty as sea water. It's searingly hot here but you can forget about air con and fans. Forget communications; Internet and mobile phones signals come and go without warning. Swimming is banned because raw sewage is being pumped into the sea, as the water pumps cannot cope without electricity. Few are allowed to leave this bit of land and I know of patients who have died waiting for permits to access treatment."

Despite efforts from Turkey and Qatar to solve the energy problem, the blockade and the flow of raw materials have not been eased. Now, Qatar has been accused with aiding terrorist groups, including Hamas. While the group has also attempted to mend its ties with Egypt in cooperation against Daesh in the North Sinai, Cairo has already abandoned the process and been increasing its pressure on dissidents as well as anyone who is somehow related to Hamas.

Despite these humanitarian issues, Israel has said Hamas has to re-evaluate its position. "I think the other side will have to re-evaluate the situation in view of the barrier's construction," Haaretz newspaper quoted the chief of Israel's southern command, Major General Eyal Zamir, as saying in a media briefing. "If Hamas chooses to go to war over the barrier, it will be a worthy reason [for Israel] to go to war over. But the barrier will be built," he added. Hamas spokesman Fawzi Barhoum called the Israeli statements "lies and fabrications that aim to damage the image of the Palestinian resistance and justify the mass killing of thousands of Palestinians civilians."

Similarly, Egypt has closed and flooded the tunnels around the Rafah border crossing with water, closing the only border gate leading to Gaza.Hamas has distanced itself from the Muslim Brotherhood and shown the intention to establish better relations with Egypt in return for providing help in the fight against Daesh-affiliated groups on the Sinai. However, the recent Qatari crisis has slowed the process. In Egyptian media, there were rumors that Egypt would hand over some parts of the Sinai to Israel. "According to a report by The New Arab news website, Egyptian newspaper el-Masriyun was censored by authorities for publishing details regarding the meetings between Cairo and Tel Aviv in which they discussed reaching a deal to sell parts of the Sinai Peninsula, Turkey's Yeni Şafak reported. "After reaching a land sale deal with Egypt, the second phase of the Israeli plan involves exiling Palestinians to the parts of the Sinai Peninsula acquired from Egypt," it added.