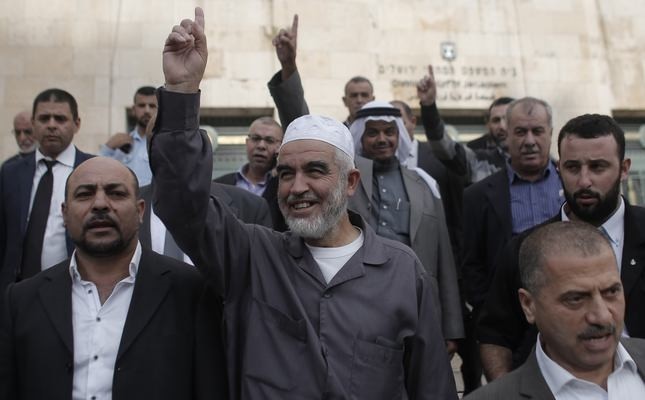 Leader of the northern wing of the Islamic Movement in Israel, Sheikh Raed Salah (C), gestures outside a Jerusalem court after he was convicted on October 27, 2015. (AFP Photo)
by Anadolu Agency Aug 15, 2017 12:00 am

Israeli police on Tuesday arrested Sheikh Raed Salah, influential cleric and Palestinian resistance figure who is the leader of the Islamic Movement in Israel, from his home in the northern city of Umm al-Fahm.

"Salah was arrested and interrogated on suspicion of inciting acts of terror and supporting an unlawful organization," police said in a statement.

He was arrested following a joint investigation between police and the Shin Bet, which was conducted at the behest of Israeli Attorney General Avichai Mandelblit, it added.

The statement said since the Islamic movement was outlawed, Salah spoke to the public and published a series of statement in the media regarding the movement's views.

Israel, meanwhile, has prohibited Salah, who is seen as an icon of the Palestinian resistance, from traveling outside the country for reasons ostensibly related to "national security".

Salah was previously sentenced to 11 months jail for "inciting violence" in 2015. To protest his prison conditions, which included solitary confinement, Salah had declared an open-ended hunger strike.

Salah was born in 1958 in the city of Umm al-Fahm in northern Israel and later studied Islamic Law at the University of Hebron in the Israeli-occupied West Bank.

He served as mayor of Umm al-Fahm for three consecutive terms between 1987 and 2001.

In 1996, Salah was elected leader of the northern branch of the Islamic Movement in Israel, known for holding daily protests at East Jerusalem's flashpoint Al-Aqsa Mosque -- Islam's third holiest site -- against perceived threats to the iconic mosque by the Israeli authorities.