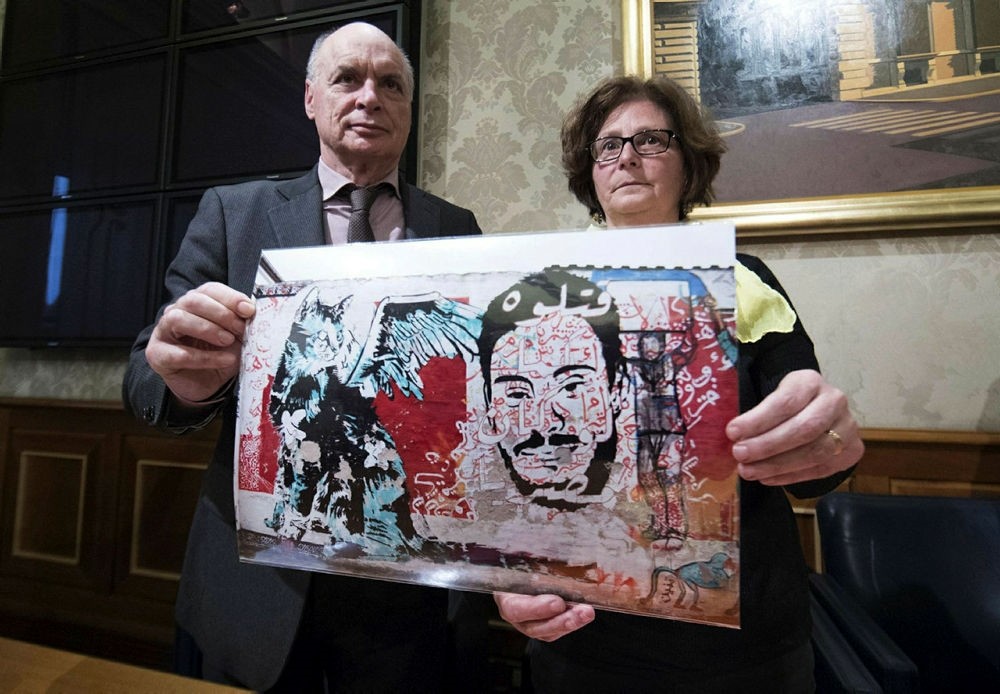 The parents of Giulio Regeni, an Italian graduate student tortured to death in Egypt, shows a pictures of a murales depicting their son. (ANSA via AP)
by Associated Press Aug 15, 2017 12:00 am

Italy is letting its ambassador take up his post in Cairo, citing on Monday Egyptian progress in the investigation of the 2016 torture death of an Italian scholar that had weighed on diplomatic ties.

The move does not mean that Italy intends to ease the pressure on Egyptian authorities to bring Giulio Regeni's killers to justice, Italian Foreign Minister Angelino Alfano. The ambassador will bear a letter asserting the government's determination to discover the truth about the murder, Alfano said.

Ambassador Giampaolo Cantini "will have the task of contributing, via contacts with Egyptian authorities, toward reinforcing judicial cooperation, and, as a consequence, the search for the truth," Alfano said.

Regeni was a Cambridge University doctoral student researching labor movements in Egypt when he was abducted in Cairo in January 2016. His body was found along a Cairo road a few days later bearing marks of extensive torture.

Italian news agency ANSA said Italian and Egyptian prosecutors issued a joint statement pledging to find the "truth and all the circumstances that led to the abduction, torture and death."

Italian state TV said Egypt has sent Italian prosecutors transcripts of fresh questioning of Egyptian police officers who had a role in investigating Regini's death. Egypt also assured Italy it would provide video surveillance footage from cameras at the Cairo subway stop where Regeni was known to have been last seen alive.

In April 2016, the then-ambassador was recalled to Italy for consultations, to highlight the Italian government's frustration with Egyptian investigators. Since then, that ambassador was assigned elsewhere, and the embassy in Cairo awaited its ambassador.

Regeni disappeared on a day Cairo police were on a tense watch for protests on the fifth anniversary of the 2011 popular uprising.

After his body was discovered, Egyptian authorities offered various explanations, including an assertion that Regeni had been hit by a vehicle. Later, they said he was a victim of a robbery.

Egypt is considered a key ally both in international efforts to combat terrorism as well as efforts to stabilize neighbor Libya, a base for human traffickers who have sent hundreds of thousands of migrants by sea toward Italy in the last few years.

In a statement, Alfano said Italy's desire to slow the flow of migrants across the Mediterranean Sea had triggered dispatching the ambassador to Cairo.

"That Egypt is an inescapable interlocutor on issues of primary importance for Italy, like the stabilization of Libya and the fight against terrorism, doesn't signify that Italy intends to turn the page in the search for truth in Giulio Regine's murder," the minister said.

Regeni's family has been outspoken in demanding that Italy insist on getting the truth from Egypt. His mother has said her son's face was so badly pummeled the only facial feature she could recognize was the tip of his nose.

Italian state TV said Monday night the family was indignant that the ambassador was allowed to go to Cairo.