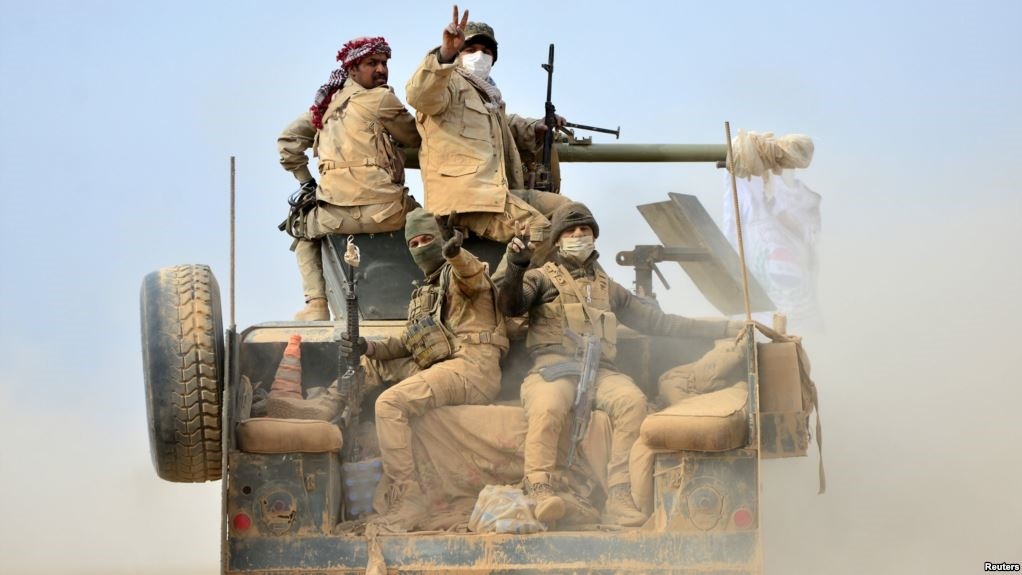 Hashd al-Shaabi forces ride on a military vehicle heading toward the airport of Tal Afar during a battle with Daesh militants in Tal Afar, Nov. 16, 2016.
by Daily Sabah Aug 16, 2017 12:00 am

With the Iraqi military striking Daesh positions in Tal Afar and a ground operation into the city imminent, experts have drawn attention to the danger the extremist Hashd al-Shaabi militia's presence poses in the offensive and fears of acts of vengeance to trigger a new upheaval

The U.S.-led coalition and the Shiite paramilitary group Hashd al-Shaabi launched airstrikes against Daesh positions in Tal Afar Tuesday ahead of a ground offensive that is yet to kick off. Iraqi Lt. Col. Shams al-Din al-Anbari said the attacks targeted Daesh arms depots and training sites in the city. "At least 17 militants were killed and seven others injured," he told Anadolu Agency. The Iraqi officer said yesterday's attacks are part of a "plan to undermine Daesh's fighting capabilities to make it easy for Iraqi forces to storm the city."

The Turkish government has firm reservations regarding such a ground offensive spearheaded by the Shiite paramilitary group Hashd al-Shaabi. A senior official from the government last week told Daily Sabah that Turkey does not favor an operation in which the extremist group partakes. The high-level official underscored that the offensive should be carried out by the national Iraqi army rather than a recently legalized paramilitary group, due to fears in Ankara that the Shiite group may spoil the ethnic and sectarian composition of the town.

"Tal Afar's ethnic and sectarian composition should be preserved," the official said, summing up Ankara's views on the issue.Even though Ankara offered a different solution to the Tal Afar issue, Washington has expressed full support for the Hashd al-Shaabi-led offensive.

"The coalition will support the government of Iraq in its plans to liberate Tal Afar and other areas of Iraq from Daesh control," U.S. Army Col. Joseph Scrocca told Daily Sabah.

"The Iraqi Council of Representatives approved the Popular Mobilization Forces (PMF) law on Nov. 26, 2016, codifying the PMF as a component of the Iraqi Security Forces under the prime minister's command. The coalition acknowledges the contributions of the PMFs to the ongoing efforts to defeat Daesh in Iraq," Col. Scrocca also said.Tal Afar, a relatively large town with a population of 200,000 Turkmens, fell into the hands of Daesh in 2014 after the Iraqi army withdrew from the town.

Ethnic cleansing stemming from sectarian divisions is feared once the extremist Shiite paramilitary group takes control of the town.

Turkey's head of the Foreign Ministry's Center for Strategic Research (SAM), Mesut Özcan, said Tal Afar is a Turkmen town and, if the post-Daesh policy in the town is vengeance-oriented, there will be no sustainable solution.

"Turkey is trying to draw attention to the possibility that some within Hashd al-Shaabi may act outside the chain of command," Özcan said.

The Iraqi Parliament voted to grant full legal status to the group on Nov. 26, 2016. The law placed the militias under the command of Iraqi Prime Minister Haidar al-Abadi and gave militiamen salaries and pensions that mirror those of the military and the police.

Ankara's concerns in regards to a Tal Afar controlled by Hashd al-Shaabi may have some grounds. The group has had an ill-famed past.

Iraq's Sunni Arabs and human rights groups have long accused the militiamen of being involved in extrajudicial killings, abuse and the theft or destruction of property in areas from which they drove out Daesh.

Recently, the Iraqi ambassador to Ankara, Hisham Ali Akbar Ibrahim al-Alawi, admitted that some people in the group "might have engaged in illegal actions" during the war in Mosul.

Bilgay Duman, an expert on Iraqi affairs at the Middle East Strategies Research Center (ORSAM), recently said Hashd al-Shaabi's track record of human rights violations is not good, adding that the Iraqi government would be responsible for any possible future tragedies in the region.

Furthermore, a 2015 Amnesty International (AI) report said, "Shiite militias have been abducting and killing Sunni civilian men in Baghdad and around the country. These militias, often armed and backed by the government of Iraq, continue to operate with varying degrees of cooperation from government forces, ranging from tacit consent to coordinated, or even joint, operations."