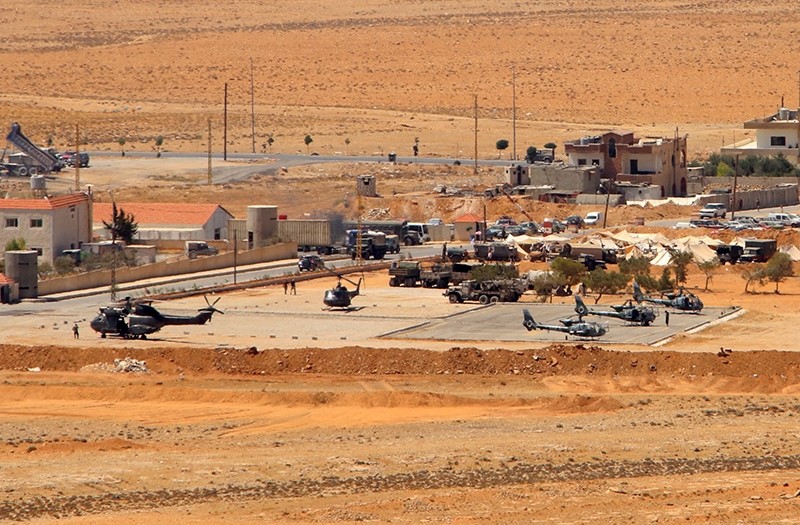 A general view taken on August 19, 2017, shows helicopters at a Lebanese military base in a mountainous area near the eastern town of Ras Baalbek (AFP Photo)
by Associated Press
Aug 19, 2017 12:00 am

Lebanon's U.S.-backed army on Saturday launched its biggest military operation yet against Daesh militants who in 2014 gained a foothold along the tiny Mediterranean country's border with Syria.

The long-awaited campaign aims to defeat Daesh in the group's border enclave and put an end to a terror threat that has loomed over Lebanon.

Simultaneously, the Assad regime army in Syria and its ally, the Lebanese Hezbollah group, are pushing to clear Daesh militants from the Syrian side of the border, in the western Qalamoun mountain range. Hezbollah has been fighting alongside Assad regime's forces in Syria since 2013.

Lebanon denies it is coordinating its offensive with the regime.

Lebanese President Michel Aoun called field commanders from the Defense Ministry where he was monitoring operations early to tell them, "You will not disappoint us," and "Our hearts and minds are with you," according to video broadcast on TV channels across the country.

Operations commenced before dawn, with the military striking Daesh positions in the eastern border areas with Syria, Brig. Gen. Ali Qanso said at the Defense Ministry, warning of a difficult battle ahead.

The barren hills in eastern Lebanon will leave infantry exposed to Daesh snipers, and the militants are expected to mine the area on a vast scale.

According to Central Military Media, a media outlet run jointly by Hezbollah and the Syrian army, a group of Daesh militants, including a self-styled "emir" or local commander, surrendered to the advancing Hezbollah and Syrian forces by midday in the Qalamoun region in Syria.

Qanso insisted the Lebanese army was not coordinating its moves with Assad's forces or the Hezbollah fighters — a potential embarrassment for Washington, should its ally, the Lebanese military be working closely with a group that the United States has classifies as a terror organization.

The U.S. is a key patron of the Lebanese army, and top Pentagon officials visited Lebanon in the run-up to the operation.

However, Hezbollah ministers hold key portfolios in the Lebanese government, and the country is now accustomed to seeing the group run operations in parallel with the army.

The presence of militants in the Lebanese border area has exposed towns and villages there to shelling and kidnappings for ransom. Car bombs are made in the area and sent to other parts of the country, including the Lebanese capital, Beirut, killing scores of people.

The army has in the past year slowly clawed back border territory, including strategic hills retaken in the past week.

Lebanon has been spared the wars and chaos that engulfed several countries in the region since the so-called Arab Spring uprisings of 2011. But it has seen sectarian infighting and random car bombings, particularly in 2014, when militants linked to al-Qaida and Daesh overran the border region, kidnapping Lebanese soldiers.

Qanso said the army had no new information about the whereabouts of the soldiers kidnapped by Daesh militants.

Lebanese politicians say Daesh controls an area of about 300 square kilometers (115 square miles) between Syria and Lebanon, around half of which is in Lebanon.

About 600 terrorists, including snipers, are holed up in the Lebanese portion of the enclave, according to Qanso, armed with guided rockets, anti-armor rockets, mortars, and other weaponry.

The area stretches from the Lebanese town of Arsal, and Christian villages of Ras Baalbek and Qaa, to the outskirts of Syria's Qalamoun region and parts of the western Syrian town of Qusair, which Hezbollah captured in 2013.