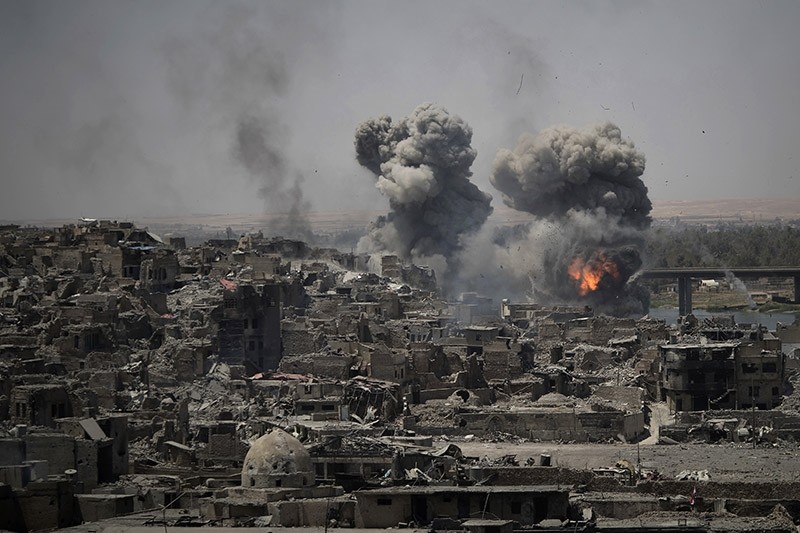 In this July 11, 2017 photo, airstrikes target Daesh positions on the edge of the Old City a day after Iraq's prime minister declared ,total victory, in Mosul, Iraq. (AP Photo)
by Associated Press Sep 13, 2017 12:00 am

Baghdad's central criminal court sentenced a Russian national to death by hanging for his membership in the Daesh terror group, the court said in a statement.

The man was arrested as Iraqi forces pushed the terrorist group out of Mosul's western half, according to the statement released late Tuesday. The fight for Mosul's west was the second phase of the operation to retake Iraq's second largest city from Daesh that was launched in October of last year and declared complete in July.

The individual was tried under Iraq's anti-terrorism law and confessed to carrying out "terrorist operations" against Iraqi security forces since 2015, said Abdul-Sattar Bayrkdar, spokesman for Iraq's supreme judicial council.

Earlier this week, Iraqi forces announced they were holding more than 1,300 foreign women and children from 14 countries at a camp for displaced people in northern Iraq. The individuals from 14 countries surrendered to Kurdish forces at the end of August after an Iraqi offensive drove the terrorist group from the northern town of Tal Afar, near Mosul, Iraqi security officials said.

The women and children will not be charged with crimes and will likely be repatriated to their home countries, the officials said, speaking on condition of anonymity in line with regulations.

However, he United Nations warned the move would likely result in "gross, irreversible miscarriages of justice ... given the weaknesses of the Iraqi justice system," according to a statement from U.N. High Commissioner for Human Rights Zeid Ra'ad Al Hussein.

Rights groups criticize Iraq's widespread use of the death penalty. In 2016, Iraq executed more than 88 people, topped only by Saudi Arabia, Iran and China, according to Amnesty international.