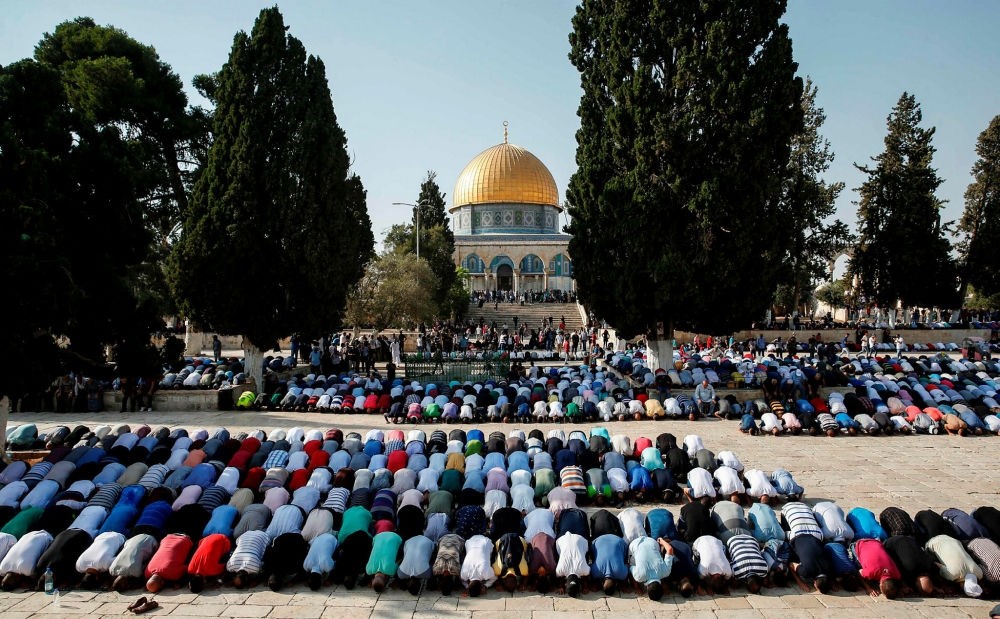 Palestinian Muslims pray inside the Haram al-Sharif compound, known to Jews as the Temple Mount, in the old city of Jerusalem.
by Compiled from Wire Services Sep 21, 2017 12:00 am

As the Israeli-occupied West Bank and blockaded Gaza Strip are locked down for the Jewish New Year, some 200 Israeli settlers entered Al-Aqsa Mosque amid restrictions on Muslim worshipers

Israeli authorities prevented Muslims from entering Al-Aqsa Mosque Wednesday while some 200 Jewish settlers were allowed to enter the mosque compound ahead of the Jewish Rosh Hashana (New Year) holiday, which began yesterday evening. Israel also announced the closure of all crossings linked to the occupied West Bank and blockaded Gaza Strip. According to a statement from the Israeli Army issued late Tuesday night, crossings will remain closed for four consecutive days from midnight Tuesday to midnight Saturday.

According to the statement, during this period Palestinians will be prohibited from entering Israel "for any reason." Exceptions will be made - with the consent of Israeli authorities - for medical emergencies and "humanitarian cases," the statement added.

For Muslims, Al-Aqsa Mosque represents the world's third holiest site after Mecca and Medina. Jews, for their part, refer to the area as the "Temple Mount," claiming it was home to a prominent Jewish temple in ancient times.

The mosque is located in East Jerusalem, which was occupied by Israeli forces during the 1967 Arab-Israeli War. The entire city was annexed in 1980 in a move that has never been recognized by the international community, with Israelis claiming it as the "eternal and undivided" capital of the Jewish state.

The Israeli government has overlooked the violations of Jewish settlers in East Jerusalem's flashpoint Al-Aqsa Mosque compound, despite calls from the Temple Mount administration and Palestinians.

The Temple Mount is central to the Israeli-Palestinian conflict, with Palestinians fearing Israel may one day seek to assert further control over it. It is located in East Jerusalem which was occupied by Israel in 1967 and later annexed in a move never recognized by the international community. It is considered the third holiest site in Islam and the most sacred site for Jews. The Jewish are allowed to visit the compound but are not allowed to pray there, amid Israeli attempts to avoid provoking tensions.

The site has been at the center of recent tensions since Israel installed, and then removed, metal detectors at the mosque following the deadly shooting of two Israeli policemen. Muslims are in charge of administering at the compound, home to the Al-Aqsa and the Dome of the Rock mosques. Jews can visit the site but are not allowed to pray there.

Anger has spilled across the West Bank since Israel shut Al-Aqsa Mosque compound following a deadly shootout on July 14. The site is venerated by Muslims as Haram al-Sharif, or the Noble Sanctuary, as well as the Jews, who call it the Temple Mount. The mosque was reopened after two days, with Israel installing metal detectors and cameras at its gates.

Seven Palestinians were killed as a result of the clashes, with dozens more wounded. Three Israelis were also killed in an attack in a settlement on the West Bank.

Despite calls from the Islamic world to not offend worshipers and return to the status quo, Israel refused to remove the metal detectors installed at the gates of the mosque, claiming the security measures were similar to procedures taken at other holy sites around the world. However, amid international criticism and pressure, Israel's Security Cabinet decided to remove the metal detectors. A statement released after the meeting said a new surveillance system using "smart checks" based on advanced technology would be put in place.