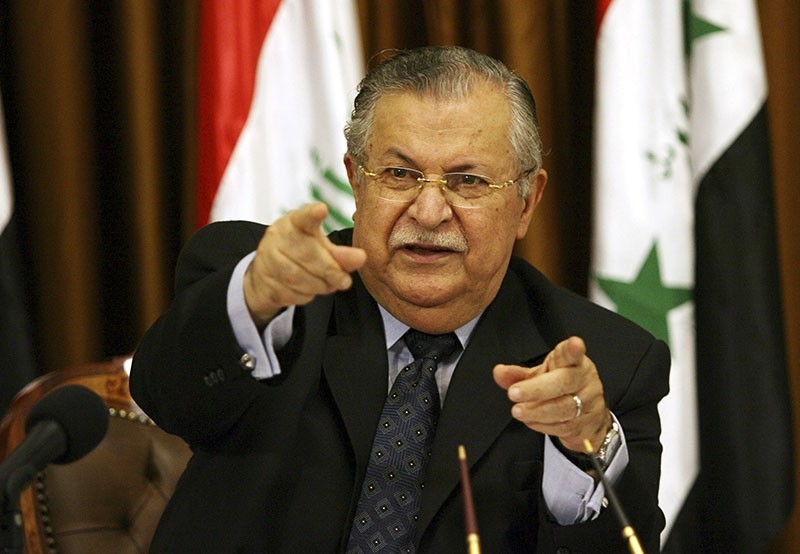 Former Iraqi President and Patriotic Union of Kurdistan (PUK) leader Jalal Talabani has died at the age of 83 in German capital Berlin where he was receiving treatment, Iraqi state television reported Tuesday.

Talabani was the first non-Arab president of Iraq, elected in 2005, two years after the U.S.-led invasion that toppled Saddam Hussein. He was the seventh president of Iraq and second after the end of the Baath rule. He stepped down as Iraqi president in 2014, after a long period of treatment following a stroke in 2012 that left him paralyzed. He was replaced by PUK co-founder Fuad Masum.

Talabani was born near Erbil, now the seat of the KRG in northern Iraq, in 1933. Also known as "Mam Jalal" in Kurdish which means "Uncle Jalal," Talabani began his political career in the 1950s after joining the Kurdistan Democratic Party (KDP).

Joining the Kurdish uprisings in 1961, Talabani led the Kurdish delegation in talks with the government under Abdulsalim Arif, who took power after Abd al-Karim Qasim was ousted in a coup d'etat.

He was among the influential members of the KDP, and took part in the 1974-75 Kurdish uprising in Iraq. In 1975, Talabani was among the founders of the center-left PUK, a branch that split from the conservative KDP. However, he ended up fleeing to Iran after being defeated in his armed struggle against the government. In the 1980s, he supported Iran in disputes against Iraq.

For a long part of its existence, PUK was backed by Iran and controlled KRG areas bordering Iran, including Sulaymaniyah.

Barzani-led KDP, backed by Iraq, and later Turkey against PKK terrorist group, and Talabani-led PUK were involved in a bitter civil war between 1994 and 1998 in which thousands of people were killed. A power sharing agreement brokered by the U.S. was signed in September 1998, diving Kurdish-held areas in northern Iraq into two.

Talabani and Barzani also left their previous grievances behind during the U.S. invasion of Iraq in 2003, siding with each other against then-President Saddam Hussein. Talabani was the first president to serve in Iraq's interim government after Hussein, becoming the first president to lead under Iraq's first constitution which was established in the post-Saddam era.

In his later years, he was often seen as a unifying elder statesman who could soothe tempers among Iraq's Shiites, Sunnis and Kurds.

While Barzani maintained close ties with Turkey and stood against the PKK through cooperation with Turkey, Talabani's PUK followed a leftist line that edged closer to the PKK terrorist group, which has been engaged in armed conflict against Turkey for nearly three decades. However, from time to time, due to his close ties with the group, Talabani also played a role in Ankara's attempts to establish a cease-fire with the PKK, having become influential in his role during the 2005-2006 Oslo talks between the Turkish state and representatives from the PKK.

In 2012, before the last peace process had started, Turkish National Intelligence Organization (MİT) undersecretary Hakan Fidan visited Talabani, who was being treated at that time in a Berlin hospital, talking over the beginning of the process with him.

Talabani has also had a representative in Ankara since 2000.