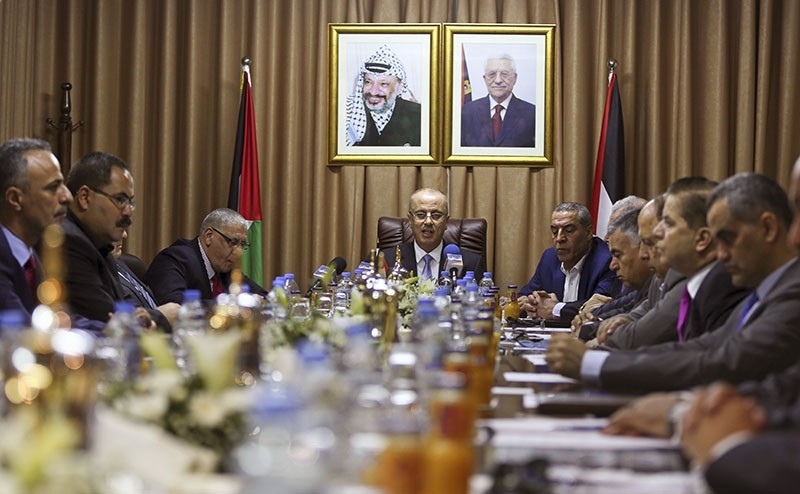 The Palestinian cabinet met in Gaza on Tuesday for the first time since 2014 in a further step towards the internationally recognized Palestinian Authority retaking control of the territory.

The meeting of the Fatah-led government, which is based in the occupied West Bank, comes as part of moves to end a decade-long split between the PA and the Hamas movement, which runs Gaza.

In an opening speech, Prime Minister Rami Hamdallah renewed his pledge to end the rift.

"We are here to turn the page on division, restore the national project to its correct direction and establish the (Palestinian) state," he said.

It was the first meeting of the cabinet in Gaza since November 2014, and comes a day after Hamdallah entered the territory for the first time since a unity government collapsed in June 2015.

On Monday, he met with senior Hamas figures, including leader Ismail Haniya.

Mahmud warned that a full reconciliation deal would take time.

"The government does not have a magic wand," he told reporters.

More than two million people live in impoverished Gaza, which has been blockaded by Israel and Egypt for years.

The sides will hold further talks next week in the Egyptian capital Cairo.

Punitive measures imposed by the PA against Hamas, including cutting electricity payments for Gaza, would remain in place pending the result of those talks, Mahmoud added.

Hamas called for the measures to be ended immediately as a show of good will.

"Our people look forward to practical steps to ease their suffering," a statement said.

A main sticking point between the parties is whether tens of thousands of Hamas employees will be added to the PA's already bloated government payroll. It is also unclear if Hamas will allow its militants to be replaced by PA security forces, especially at Gaza's border crossings to Egypt.

Hamas has controlled Gaza since seizing it from the PA in a near civil war in 2007 after Hamas swept 2006 legislative polls that were ultimately rejected by Fatah, Israel and the international community. So far, multiple previous reconciliation attempts have failed.

The United States and the European Union blacklist Hamas as a terrorist organization, complicating the formation of any potential unity government.

The head of Egyptian intelligence Khaled Fawzi is to visit Gaza later on Tuesday and meet with Hamas and PA officials, including Haniya.

Abbas himself remained in the West Bank city of Ramallah.

Hamas security were on the roof of the building, while Palestinian Authority agents were deployed inside, an AFP correspondent reported.

"Today we are faced with a historic revival in which we are grappling with our wounds and elevating our unity," Hamdallah said, reaffirming that there would be no Palestinian state without Gaza.

U.N. Middle East envoy Nickolay Mladenov said on Monday that he was "carefully optimistic" about the reconciliation talks.

"If the region stays engaged, if Egypt's role continues and if the political parties themselves continue to show the willingness they are currently showing to work with us on this process, then it can succeed," he told AFP.

In an interview on Monday night Abbas said that while the two sides "might have wronged each other and cursed each other, today we enter a new phase."

A key issue is Hamas's powerful military wing that has fought three wars with Israel since 2008. Hamas officials reject the possibility of dissolving it.

Abbas told Egypt's CBC that there will be "one state, one system, one law and one weapon" -- in an apparent reference to Hamas's military wing.

He also warned Hamas could not "copy or clone Hezbollah's experience in Lebanon," referring to a situation where an independent armed group exerts major influence on national politics.

The United States cautiously welcomed Hamdallah's visit, but White House special envoy Jason Greenblatt warned any Palestinian government "must unambiguously and explicitly commit to nonviolence, recognition of the State of Israel, acceptance of previous agreements and obligations between the parties and peaceful negotiations."

The Palestinian Authority has signed peace deals with Israel, but Hamas was not party to them and does not recognize Israel's right to exist.
Last Update: Oct 03, 2017 1:54 pm
RELATED TOPICS