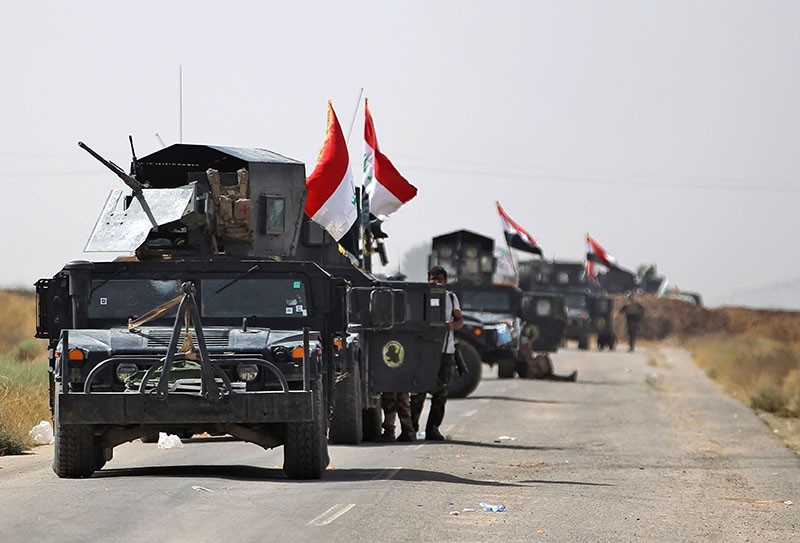 Vehicles of the Iraqi forces and Hashd al-Shaabi (Popular Mobilisation) paramilitaries are seen on the advance towards the Daesh's stronghold of Hawija on October 3, 2017, to recapture the town from the terrorist group. (AFP Photo)
by Compiled from Wire Services Oct 04, 2017 12:00 am

Iraqi forces launched a final assault yesterday to capture the town of Hawija, one of two pockets of territory in Iraq still under Daesh control, the country's military said in a statement.

Iraqi state TV broadcast live footage showing the area covered by thick black smoke, rising from oil wells torched by the militants as a tactic to prevent air detection. Hawija is located near the oil city of Kirkuk, in northern Iraq.

The offensive on Hawija is being carried out by U.S.-backed Iraqi government troops and Iranian-trained and armed Shi'ite paramilitary groups known as Popular Mobilization.

They began moving on the town of Hawija two days after capturing the Rashad air base, 30 km (20 miles) to the south and used by the militants as a training and logistics site.

Iraq launched an offensive on Sept. 21 to dislodge Daesh from Hawija and surrounding areas where up to 78,000 people could be trapped, according to the United Nations.

Iraqi security officials say the militants are preventing some residents from leaving, while others are afraid of escaping towards government forces because of explosives that might have been laid by Daesh around the town.

The other area of the country still under the control of the militant group is a stretch of land along the Syrian border, in western Iraq, including the border town of al-Qaim.

The militants also hold the Syrian side of the border at al-Qaim, but the area under their control is shrinking as they retreat in the face of two different sets of hostile forces -- a U.S.-backed, Kurdish-led coalition, and Syrian regime troops with foreign Shi'ite militias backed by Iran and Russia.

The militants' leader Abu Bakr al-Baghdadi, who declared the caliphate from Mosul in mid-2014, released an audio recording last week that indicated he was still alive. He called on his followers to keep up the fight despite the setbacks.

Iraq declared that its forces retook the northern city of Tal Afar and the surrounding region in another major victory over the Daesh terrorist group. Tal Afar and the surrounding area was one of the last pockets of Daesh-held territory in Iraq after victory was declared in July in Mosul. The town, about 150 kilometers (93 miles) east of the Syrian border, sits along a major road that was once a key Daesh supply route.

Iraqi forces dislodged Daesh from their last stronghold in Mosul in July, once Iraq's second largest city in terms of population. Mosul fell to the Daesh terrorist group in 2014 when its militants blitzed across much of northwestern Iraq and subsequently declared a caliphate on the territory held by extremists in Iraq and Syria. Iraqi forces launched the operation to retake Mosul last October and by late January, the eastern half of the city - which is roughly divided by the Tigris into a western and eastern section - was declared liberated. The push into western Mosul began the following month and in June, Iraqi forces started the weeks-long push through the Old City, Mosul's most congested district.