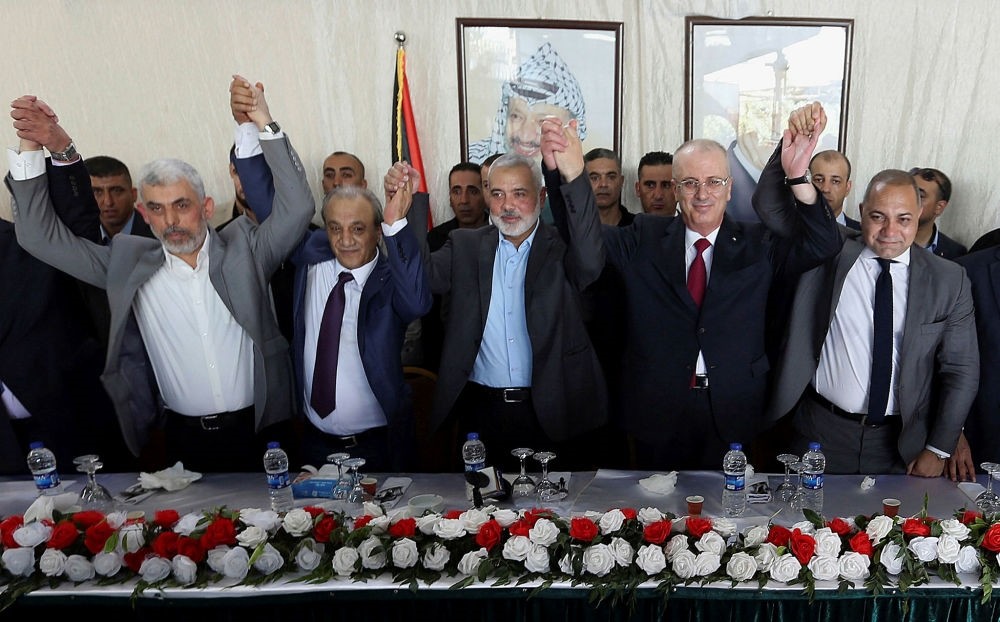 The Palestinian Authority (PA) and Hamas finally reached an agreement this week to create a joint cabinet. The decision came after long meetings, crises, debates and international pressure

The Palestinian cabinet, led by Prime Minister Rami Hamdallah, held its first meeting in Gaza after three years. Hamas had signaled that it was ready for certain concessions, and the PA was under pressure to accept the unification as the two factions had been rivals since Hamas took over power in Gaza in 2007. "After Hamdallah's entourage entered Gaza through the Erez crossing, they were given a festive welcome by hundreds of residents and representatives of all the Palestinian factions, including Hamas. Pictures of Palestinian President Mahmoud Abbas and the late Palestine Liberation Organization Chairman [PLO] Yasser Arafat were displayed on a platform, a rare sight in the Strip in recent years," Israel's Haaretz reported on Tuesday. "We came to Gaza at the instruction of President Mahmoud Abbas to declare within Gaza City that the Palestinian state will not be established without there being unity between the West Bank and the Gaza Strip and to end the chapter of divisiveness with all its ramifications," Hamdallah said, and added that his government was ready to accept responsibility for the densely populated city. He said the government was going to set up committees to deal with "the crossings and the borders and all issues relating to the functions and work of the government to ease Gazans' suffering."

For this historic moment, not only Israel and Egypt, but also Russia made efforts as representatives of the two factions met in Moscow last January. After three days of negotiations in Moscow, both parties declared they had reached an agreement and that a new National Council would be formed that would include Palestinians who had been exiled. The council was expected to be on the voting ticket in June elections. It was reported that the two parties' members met in Gaza on April 18 to seek a way toward unification and coping with Gaza's problems. Fatah demanded Hamas dissolve its administrative committee and hold a new local election and Hamas accepted that. However, Abbas' struggle to preserve his post and eliminate rivals in his party have appeared as a crisis with Hamas as Abbas demanded Israel cut off electricity in Gaza. Abbas told Israel it would no longer pay for the electricity Israel supplies to Gaza, a move that could lead to a complete power shutdown in the territory, whose 2 million people had already endured blackouts for much of the day.

In May, Hamas declared its new program, disavowing itself from the Muslim Brotherhood, distancing itself from aims of destroying Israel and accepting the 1967 borders of the Palestinian state without referring to Israel's legitimate statehood. Hamas also signaled its acceptance of a two-state solution through an alliance with Abbas' party. There were several reasons for the release of Hamas's new program; namely, its attempt to better relations with Egypt to combat the Daesh threat in north Sinai, aims to decrease internal pressure coming from Abbas and the international one coming from Egypt and Israel. At the same time the United Arab Emirates (UAE) have also pressured on Hamas for the reconciliation since the Gulf country wanted to break the influences of Turkey and Qatar as well as Iran in the tiny area.

Through Mohammad Dahlan, the UAE promised to solve the fuel problem in Gaza but demanded its own interests be put on the agenda. Dahlan is considered a popular figure across the region, having joined peace talks for Syria in Cairo last March and participating in a meeting organized by Russian President Vladimir Putin in 2015. The former Fatah strongman also appears on several TV channels, presenting himself as a man who can potentially save the region from conflict. On the other hand, his animosity towards Turkey is evident as he attacks Turkey and President Recep Tayyip Erdoğan every chance he gets. The UAE and Egypt both support Dahlan likely because they are disappointed by the active role Turkey plays in the region. Simultaneously, Iran was pushing for Hamas to reconcile with Bashar Assad's regime in Syria and to tighten its loosened relations with Lebanon's Hezbollah. Due to both internal and international pressures, the reconciliation currently seems to be lasting. But, apparently several problems are to be faced as Al-Jazeera reported on Tuesday: "While administrative control will be handed over, the Hamas government will retain authority over security, a factor that political analysts say is likely to result in the failure of the unity government."