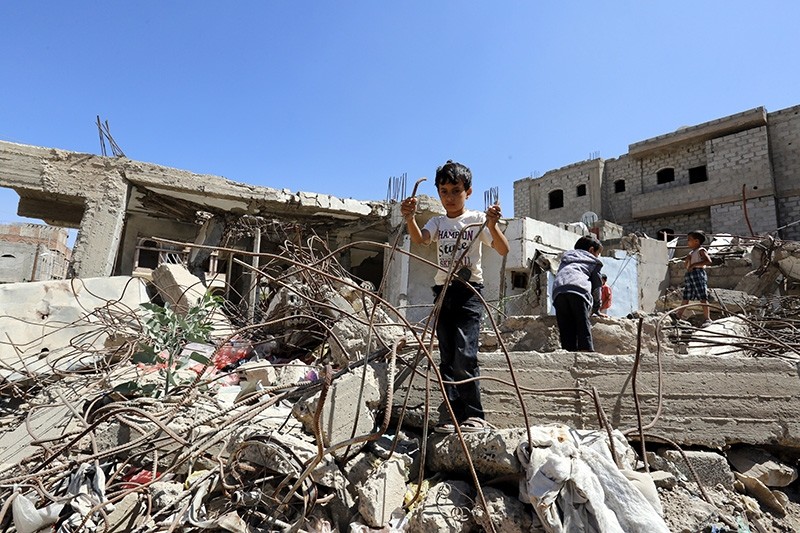 A Yemeni child stands on severely damaged ruins of a house that reportedly was destroyed by Saudi-led airstrikes, at a neighborhood in Sana'a, Yemen, 07 October 2017 (EPA Photo)
by Daily Sabah Oct 07, 2017 12:00 am

The Saudi-led Arab Coalition in Yemen issued a statement in response to a United Nations report over the killing of children in Yemen, expressing full rejection of the information for being based on incorrect data, while pointing out that it would affect the credibility of U.N. reports.

The coalition expressed its rejection of the methods used by the U.N., which provided them with misleading and incorrect information aimed at diverting attention from the crimes of the Iran-backed Houthis and the followers of former President Ali Saleh.

The coalition reaffirmed its commitment to abide by international standards and laws for the protection and safety of civilians and to exercise utmost caution to avoid harming civilians.

The coalition also blamed the Houthis and forces loyal to former President Ali Saleh over responsibility for committing crimes and immoral and illegal use of civilians, including children, as human shields, in flagrant violation of international standards and human rights, without regard to the sanctity of the human soul, to achieve their illegal goals and objectives.

The coalition also confirmed that it had taken comprehensive and important measures to protect civilians to minimize collateral damage in accordance with the rules of international humanitarian law.

The coalition called on the U.N. bodies to continue to cooperate with the countries of the coalition to strengthen measures to protect children, and to hold the Houthi and militias of former president Saleh responsible for violations against children in Yemen.

On the other hand, Saudi Arabia refuted the facts and figures in a U.N. report that sought to hold the Arab Coalition responsible for the killing and wounding of 683 children in Yemen, describing it as inaccurate and misleading.

Abdullah al-Maalmi, Saudi Arabia's ambassador to the U.N., said in a statement that his country was exercising utmost care and caution to avoid harming civilians.

He referred to his country's reservation on the inclusion of the Arab Coalition in the second paragraph of the U.N. report on the situation of civilians and children in Yemen, citing false information.

The Saudi envoy to the U.N noted that the means of collecting information in the report were deficient, because they were based on unreliable and impartial sources, and has exaggerated the proportion of the number of casualties in various areas.

Al-Maalmi blamed the Houthi militias for the figures shown in the U.N. report, pointing out that the figures in the report were incorrect, even those that indicated the coalition's responsibility for them, since the source of the information is the Houthis.

"What is important in my opinion is to ensure that any incidents are investigated, responsibility is taken and who is responsible, regardless of the nationality of the aircraft or pilot, and we do not underestimate the investigation, but we must wait for it to end," he said.

Sources in Yemen have stressed that the U.N. relies on the records of the Ministry of Health and hospitals controlled by Houthi militias, which deliberately falsify the records and provide the U.N. with baseless numbers. Non-governmental organizations of Houthi-Saleh militias also deliberately mislead public opinion.

The sources pointed that Houthis deliberately recruited children according to testimony of reports of the United Nations and put them on the front lines and blamed the coalition in killing to hide the original crime, the recruitment of children, in addition to forging Houthi books and records of the ministry and health centers under the control of the coup in which to bring children who were killed on the front lines and registered as dead to civilian children as a result of coalition air strikes.