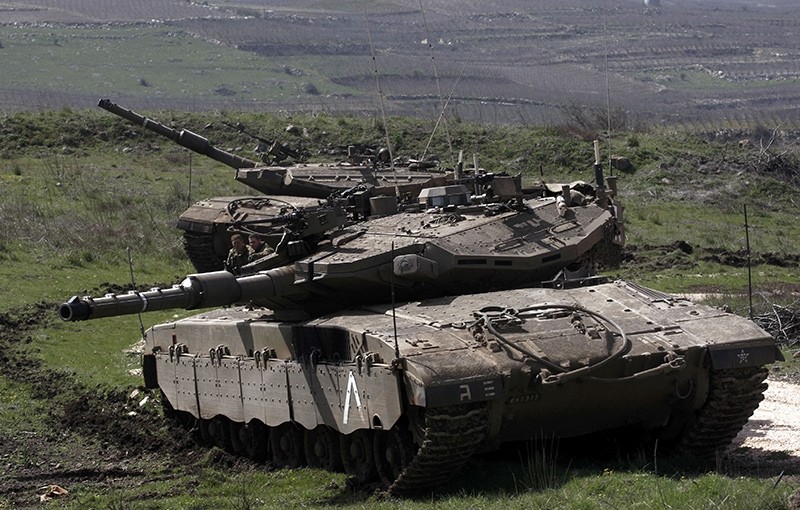 An Israeli tank is seen stationed near the village of Majdal Shams on the border with Syria, on March 19,2014 (AFP File Photo)
by Daily Sabah with AFP Oct 09, 2017 12:00 am
An Israeli tank has shelled a post of the Hamas movement in Gaza after there was an attempt to fire a rocket into Israel, its army said.

The rocket, initially believed to have hit southern Israel late Sunday, fell inside the Gaza Strip but had been intended for the Jewish state, it said in a statement.

"As the rocket fire endangered Israeli citizens and violated Israeli sovereignty, a tank targeted and destroyed a Hamas observation point in the southern Gaza Strip," the English-language statement said.

There was no word on Monday morning of any casualties.

Israel and Hamas, who run Gaza, have fought three wars since 2008. Since the last one in 2014, a fragile cease-fire has been observed along the largely closed border. Missiles and rockets are periodically fired at Israel, and Israel holds Hamas responsible for all rocket fire from Gaza regardless of who carried it out, and usually retaliates within hours.

The summer of 2014 was a disaster for the tiny coastal Gaza City in the Gaza Strip, as the Israeli air force along with troops pounded the city for weeks – the result of an accusation that Hamas launched terror attacks on Israel. During the four-week Gaza war, the Palestinian death toll rose to 2,140, who were mostly unarmed civilians, according to the Palestinian Health Ministry. On the Israeli side, 73 people were killed, mostly soldiers. At least 425,000 displaced people in the Gaza Strip now live in emergency shelters, according to the U.N., and nearly 12,000 homes have been destroyed or partially damaged by Israeli air strikes, leading to worsening humanitarian conditions in the enclave.

Despite efforts to ease the Israeli siege on Palestinian territory, the effects of the Gaza war continue as Gazans are still in desperate need of medical and humanitarian aid. During the 50-day Israeli offensive, Gaza's infrastructure was heavily damaged. Furthermore, a lack of fuel and the bombing of the strip's only power plant led to an electricity crisis in the city.

Since the start of Israel's occupation in 1967, the figures show that the number of internally displaced people (IDPs) in Gaza Strip and the rest of Palestine reaches to 475,000. This means that nearly 25 percent of Gaza's 1.8 million population has forcibly displaced within the small territory of occupied Palestine.

Apart from the ongoing Israeli military operation, Palestinians have long been suffering from Israeli military operations since 1967. According to the Internal Displacement Monitoring Centre (IDMC), Israel's Cast Lead operation in December 2008, led to 17,000 Palestinians displaced in the Gaza Strip as their homes were completely or partially destroyed. Also, prior to the 2008 Gaza war, at least 129,000 Palestinians were reportedly displaced between 1967 and 2009, as a result of the demolition of their homes and livelihood. Displacement in Occupied Palestine is not a choice but an obligatory fact for all Palestinians as they have been forcibly displaced as their lives have been threatened by the ongoing Israeli assault on Gaza.
Last Update: Oct 09, 2017 9:50 am
RELATED TOPICS