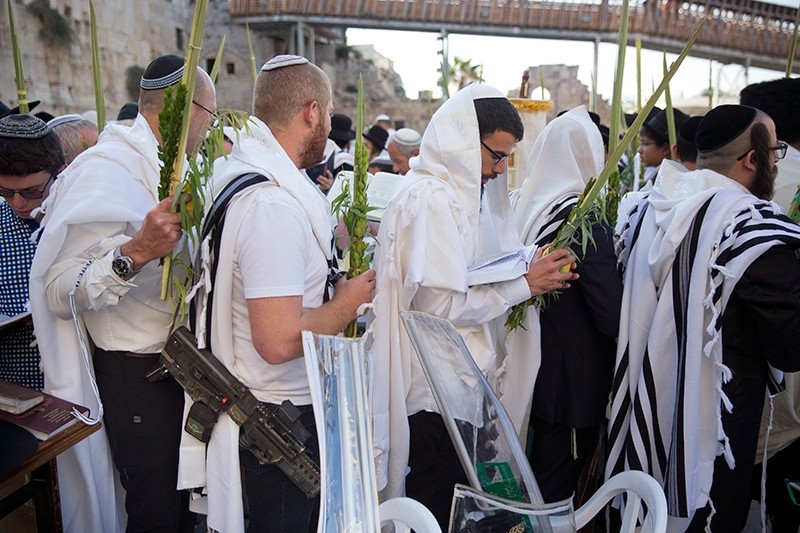 Israeli Ultra-orthodox Jews of the Cohanim Priestly caste participate in a blessing as they hold the four items used during the Jewish holiday of Sukkot, inside Al-Aqsa Mosque Complex, Oct. 8, 2017. (AP Photo)
by Daily Sabah with AA Oct 10, 2017 12:00 am

Firas al-Dibs, a spokesman for the Jordan-run Jerusalem Islamic Waqf, which is responsible for overseeing the city's Islamic sites, said a total of 537 settlers, backed by Israeli police, have stormed the complex since morning.

According to al-Dibs, Jewish groups have called on supporters to converge on Al-Aqsa compound this week to mark Sukkot, a week-long holiday, which started Wednesday and will continue until Sunday.

The site has been at the center of tensions in July since Israel installed, and then removed, metal detectors at the mosque following the deadly shooting of two Israeli policemen. Muslims are in charge of administering at the compound, home to the Al-Aqsa and the Dome of the Rock mosques. Jews can visit the site but are not allowed to pray there.

Anger has spilled across the West Bank since Israel shut Al-Aqsa Mosque compound following a deadly shootout on July 14. The site is venerated by Muslims as Haram al-Sharif, or the Noble Sanctuary, as well as the Jews, who call it the Temple Mount. The mosque was reopened after two days, with Israel installing metal detectors and cameras at its gates.

Seven Palestinians were killed as a result of the clashes, with dozens more wounded. Three Israelis were also killed in an attack in a settlement on the West Bank.

Despite calls from the Islamic world to not offend worshipers and return to the status quo, Israel refused to remove the metal detectors installed at the gates of the mosque, claiming the security measures were similar to procedures taken at other holy sites around the world. However, amid international criticism and pressure, Israel's Security Cabinet decided to remove the metal detectors. A statement released after the meeting said a new surveillance system using "smart checks" based on advanced technology would be put in place.

Israel occupied East Jerusalem –in which the Al-Aqsa is located – during the 1967 Middle East War. It formally annexed the entire city in 1980, claiming it as its capital – a move never recognized by the international community.