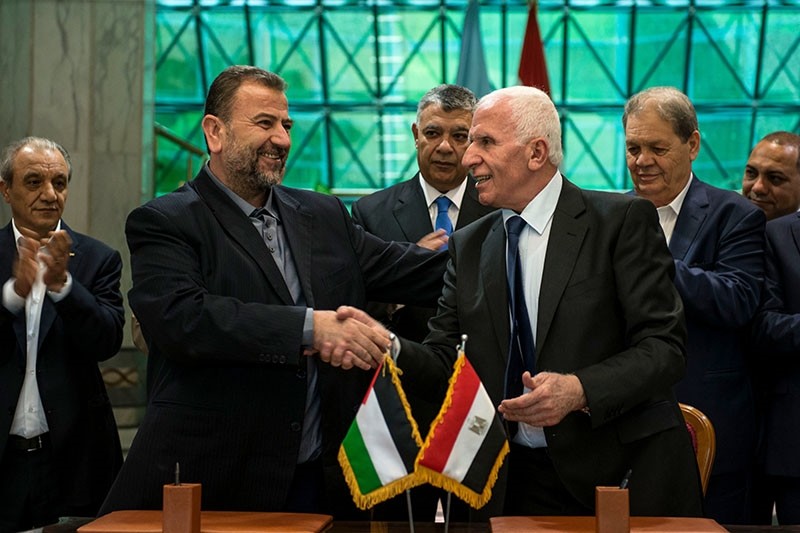 Hamas and Fatah have reached a preliminary, partial agreement that could pave the way for Palestinian President Abbas to resume governing the Gaza Strip a decade after Hamas overran the territory

Rival Palestinian groups Hamas and Fatah have reached a preliminary, partial agreement that could pave the way for Palestinian President Mahmoud Abbas to resume governing the Gaza Strip, a decade after Hamas overran the territory, officials close to Egyptian-brokered negotiations said on Thursday.

The deal includes the handover of administrative control of Gaza to a unity government by December 1.

Hamas leader Ismail Haniyeh said in a statement that the agreement was reached under "generous Egyptian auspices," but provided no details.

A senior Palestinian official said Abbas, the leader of Fatah, might visit Gaza in the coming weeks, depending on a successful implementation of the agreement. The official spoke on condition of anonymity pending a formal announcement in Cairo.

The Western-backed Abbas hasn't set foot in Gaza since 2007, when Hamas, his main ideological rival, seized the territory in street battles with his loyalists.

The Hamas takeover, which came a year after the group defeated Fatah in Palestinian parliament elections, left Abbas with autonomous enclaves in the Israeli-occupied West Bank.

Over the past decade, each side deepened control over its territory, making it increasingly difficult to forge compromises and repeated attempts at reconciliation failed.

The preliminary deal being announced on Thursday came after two days of talks between Hamas and Fatah in the Egyptian capital, Cairo.

Egypt has been keen to improve security in the Sinai Peninsula which borders Gaza and where militant groups have fought a long-running insurgency.

Under the emerging agreement, Hamas would hand over responsibilities of governing Gaza to the West Bank-based government of Prime Minister Rami Hamdallah.

Officials close to the talks said the sides agreed to set up committees to work out the details — in the past a mechanism that quickly led to deadlock.

One committee would have four months to determine who among thousands of Hamas civil servants would be able to join the new government. Another committee would merge 3,000 Palestinian Authority loyalists into Gaza's Hamas-run police force.

Negotiators also agreed that control of the Gaza side of the border crossing with Egypt would be handed to Hamdallah's government, said a senior Hamas official who spoke on condition of anonymity, also pending the formal announcement.

He said both sides agreed that European monitors could be deployed at the border crossing.

A permanent opening of the Rafah crossing would mean an end to the crippling Gaza border blockade which prevents free trade and bars the vast majority of Gaza's 2 million people from leaving the territory. Egypt has opened the Rafah crossing only sporadically since 2007.

The Hamas official said Hamas, Fatah and smaller Palestinian factions would meet early next month to discuss other issues related to Palestinian reconciliation, including holding long-overdue parliamentary and presidential elections.

Hamas and Fatah would return to Cairo in early December to assess implementation of the agreement, the official said.

In the current context, both sides might be more willing to reach a deal than in the past.

Struggling with the fallout from the border blockade, Hamas has found it increasingly difficult to govern or provide basic services, such as electricity, to Gaza's people.

The 82-year-old Abbas, meanwhile, might be thinking about his legacy. The political split has been a major stain on his rule, particularly at a time when attempts to negotiate the terms of Palestinian statehood with Israel seem to be going nowhere.

Abbas heads the political camp that seeks to establish a state in the West Bank, Gaza and east Jerusalem, lands Israel captured in the 1967 war.

Hamas suggested in a new political manifesto earlier this year that it might consider a state in pre-1967 lines as an interim option, but also endorses an Islamic state in historic Palestine, including what is now Israel. The group refuses to renounce violence or recognize Israel.

A major sticking point, which was not addressed in Cairo talks, has been the Hamas military wing and its arsenal.

It's not clear if this will satisfy Abbas, or if the dispute will re-emerge later on.