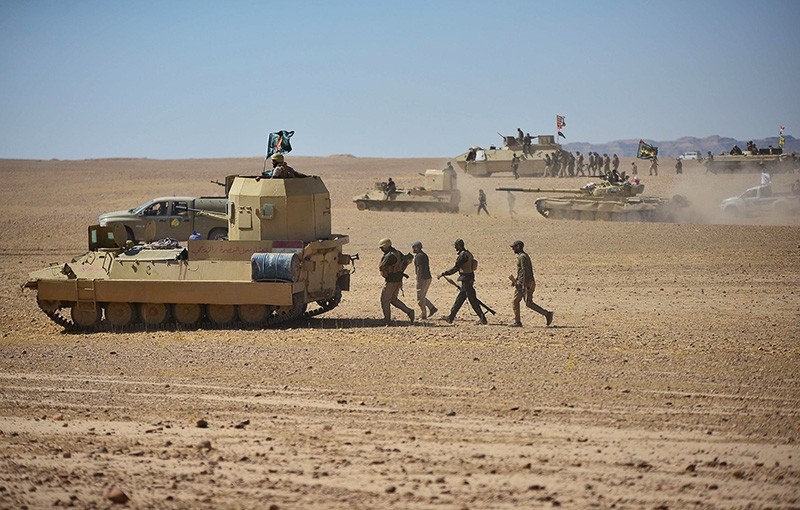 "Iraqi armed forces are advancing to retake their military positions that were taken over during the events of June 2014," the general told AFP by telephone, asking not to be identified.

In 2014, when the Daesh group swept through areas north and west of Baghdad, many units of the Iraqi army collapsed and KRG forces stepped in to take over.

The confirmation came after KRG officials stated Friday that thousands of fighters were deployed around the disputed oil city for fear of an attack by Iraqi government troops and militia after the controversial independence referendum rejected by Baghdad and neighboring Turkey and Iran.

"Their order is to defend at any cost," Hemin Hawrami said.

Meanwhile, Turkish media outlets reported Thursday that fighters deployed in Kirkuk include hundreds of militants of the PKK terrorist group.

The Kurdistan Regional Security Council (KRSC) said that federal troops and allied paramilitary units had been massing in two areas south of Kirkuk, a Kurdish-held but ethnically divided city that lies at the heart of the decades-old dispute.

The alert came after the KRG authorities accused the Iraqi government of massing forces in readiness for an offensive to seize KRG-held oil fields around Kirkuk, as tensions soar after a vote for independence last month.

"Intelligence shows intention to take over nearby oil fields, airport and military base."

Kirkuk province is the location of northern Iraq's main oil fields and, even though far more crude is now pumped from the south, it is bitterly disputed between Baghdad and the Kurds.

On Thursday, Kurdish peshmerga closed the two main roads from Mosul to the Kurdish cities of Arbil and Dohuk for several hours for fear of an attack in the area, Kurdish officials said.

Iraqi Prime Minister Haider al-Abadi denied any attention of ordering an assault on his own people but the Kurds were unconvinced and accused the army's militia allies of trying to provoke a confrontation.

Hawrami urged the international community to intervene and call on Iraqi Prime Minister Haider al-Abadi to "order PMF to pull back if he can or if they listen to him".

"No escalation from our side. Just defend and roll them back if they attack," the senior Barzani adviser said.

The surge in tensions comes two weeks after voters overwhelmingly backed independence in a non-binding referendum that the federal government condemned as illegal.

Polling was held in the three provinces that have long formed an autonomous Kurdish region as well as neighboring areas, including Kirkuk.

Baghdad continues to reject ambitions to incorporate Kirkuk and other disputed areas in their autonomous region.