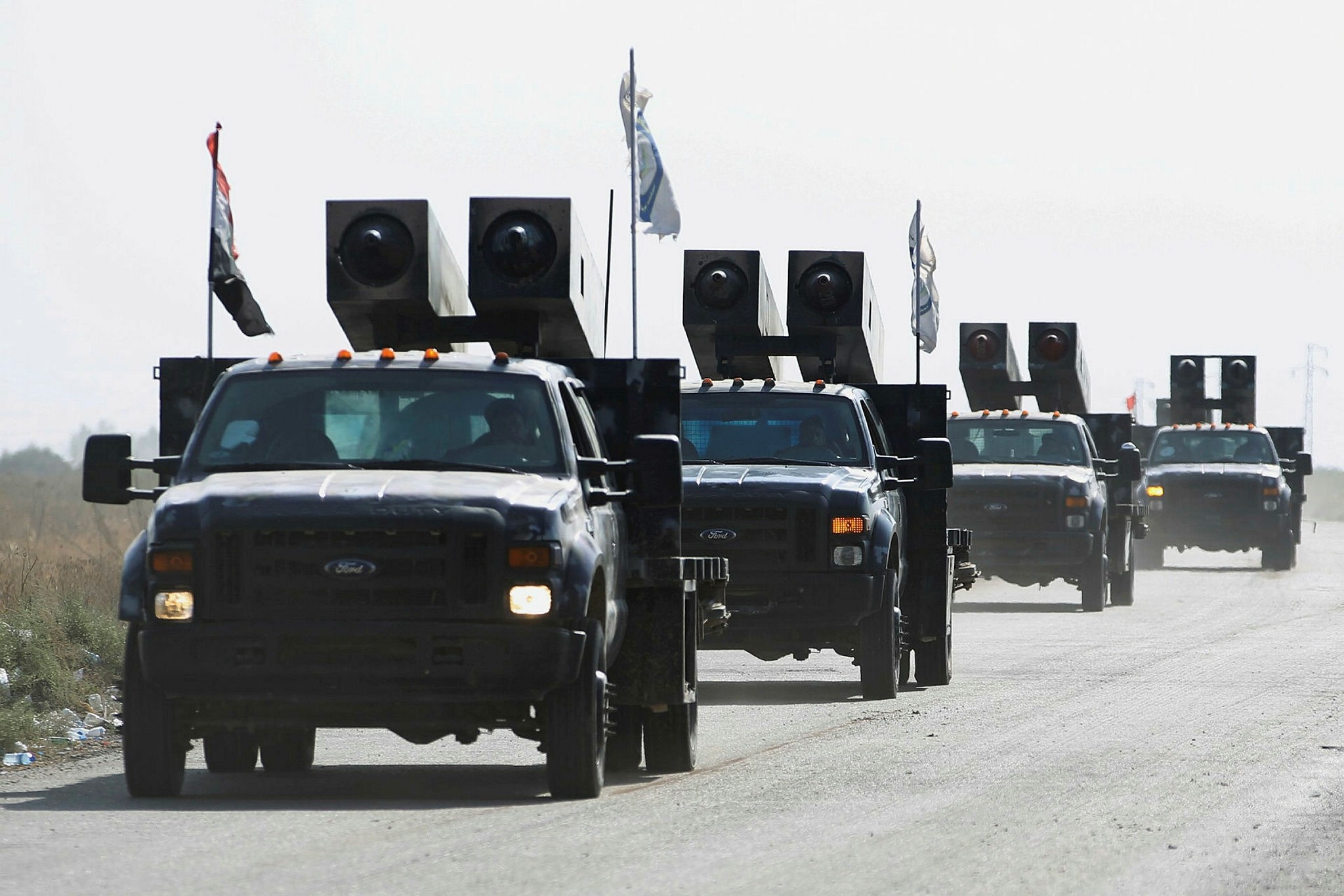 Iraqi forces drive toward Kurdish peshmerga positions on the southern outskirts of Kirkuk, Oct. 14.
by Yusuf Selman İnanç Oct 16, 2017 12:00 am

In its latest report, the Al Sharq Forum discussed that three scenarios would be expected in Iraq in the aftermath of the KRG's unilaterally imposed independence referendum, including an armed conflict among the parties

A recently released report by the Istanbul-based Al Sharq Forum discussed possible scenarios following the Kurdistan Regional Government (KRG) of Iraq's self-imposed independence decision, under the leadership of its President Masoud Barzani. The report said there were three to-be-expected scenarios in the aftermath of the decision.

The first one is a political standoff in which the central Baghdad administration may impose sanctions on the region.

The second is what the report calls "strategic prudence," Baghdad may harden its political rhetoric while leaving the imposition of sanctions behind.

The final and worst scenario, according to the report, is an armed conflict between the peshmerga and the Iraqi army, accompanied by several armed militias that were in the pay against Daesh.

Despite international calls and great pressure from neighboring countries Turkey and Iran, the KRG held an independence referendum last month in the hope that the Irbil administration may gain independence amid the chaotic atmosphere of the region as well as the exhaustion of the Iraqi army due to the struggle against Daesh. But the U.S. and the EU found the timing wrong, since they believed this move would hamper the process of Daesh's erasure from the country.

Besides, the U.S. was in favor of the incumbent Iraqi Prime Minister Haider al-Abadi in the upcoming elections next year, since he has been exploited as counter-balance against Iran's imminent influence on the central government.

Russia declared a neutral position, essaying to ward-off the controversial move with no menace to its interests in Syria. As of now, Israel is the only country with explicit support for the KRG with a view to creating a buffer state nearby Iran.

Turkey has been ardently opposing the referendum and, since it was held, has adopted very harsh rhetoric against Irbil, mentioning an array of sanctions, including ceasing the flow of the oil through its territories. Foremost, Turkey believed that the referendum would dissolve Iraq's unity and ignite sectarian rifts on a much larger scale, as Shiites, Turkmens and some other non-Kurdish minority groups would be unhappy with the separation.

Moreover, the boundaries that would be imposed as a result of the referendum were not and still are not clear, as the Irbil administration seeks to annex the contested areas, including Turkmen-dominated Kirkuk. In a similar fashion, Iran has challenged the legality of the referendum, arguing that it was invalid. One of its main concerns was that the attempt at independency would lure its own Kurdish citizens.

The concern was not groundless, since thousands of Iranian Kurds have taken to the streets, chanting pro-independence slogans. A possible unification between the Barzani government and the PKK-affiliated Democratic Union Party (PYD) in Syria may entice the Kurdistan Free Life Party (PJAK), another PKK affiliated terror group, operating in Iran.

The central government has already commenced imposing limited sanctions, like closing border gates and canceling international flights, which the report said would occur in the first scenario, with the Iraqi government continuing to enlarge the scope of sanctions. Besides the administrative ones, the report indicated that political sanctions were also on the way.

The report added that the possible sanctions, imposed by Iran and Turkey, would contribute to the conclusion of this scenario, as the KRG is largely dependent upon Turkey's supply of food, and raw materials.

Calling the second scenario, "strategic prudence," the report said, "While waiting for the tempest stirred up by the referendum to pass, Baghdad might practice strategic prudence by confining its response to aggressive political rhetoric and limited administrative sanctions – taking advantage of the regional and international support for Iraq's territorial integrity."

Stating that the second scenario, like the former one, leaves the military option out, the report said Barzani might find a breath-taking time for dealing with the internal questions, since there was a political stalemate prior to the referendum, so that there would be a unified voice during possible negotiations with the central government.

Finally, the report said that the worst scenario would be an armed conflict that may consolidate the already existing ethnic and sectarian crises.

Putting the Arab and the Turkmen forces on one side and the Kurdish ones on the other side, including the PKK that is largely located in not only the country's north but also in Kirkuk and Tuz Khurmatu's outskirts thanks to the peshmerga's help, the report stated it was not likely that the central government would make a military incursion immediately. Yet, it added the armed militias like the Hashd al-Shaabi, which are known for receiving direct support from Iran and their atrocities towards the Sunni civilians, "have different allegiances depending on their religious beliefs, sectarian identity, political affiliations, and sources of financial support.

Several Hashd al-Shaabi commanders have already made threats against the KRG, promising to drive Kurdish security forces out of the disputed territories."

The report concluded that, "The Kurdistan Regional Government seeks not only to increase its territorial reach, but also seeks more power over its territory, airspace, and resources, away from the watchful eye of Baghdad. However, it is unlikely that the KRG will get both more territory and more powers at the same time, unless the KRG is willing to negotiate the co-administration of Kirkuk, and the exploration for and financial revenues of natural resources – most notably oil and gas."