US conducts anti-Daesh airstrikes in Yemen for first time 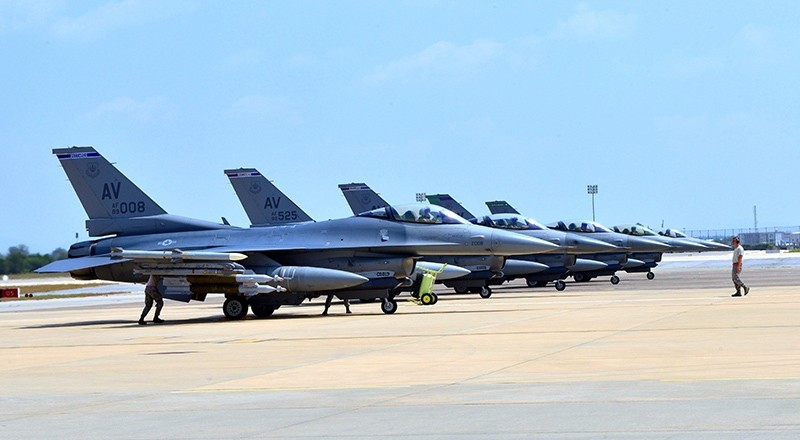 This US Air Force handout photo taken on August 9, 2015 shows F-16 Fighting Falcons sitting on the tarmac at the Incirlik Air Base near Adana, Turkey. (AP Photo)
by Compiled from Wire Services Oct 17, 2017 12:00 am

The U.S. military said Monday it conducted deadly nighttime airstirkes against Daesh fighters at the group's training camps in central Yemen, in the first such attack in the country's conflict.

Witnesses said villagers were prevented by tribal leaders from approaching the area and retrieving the dead and wounded for fear of additional strikes.

This is the first time allies of Yemen's internationally recognized government have announced raids against Daesh footholds.

The Pentagon said in a statement that U.S. forces had killed dozens of Daesh members in a strike on two camps where fighters trained in using machine guns and grenade launchers.

Residents disputed that account, saying the fighters targeted actually hailed from a powerful al-Qaida affiliate who deployed in the area to fight Iran-aligned Houthi militiamen as part of Yemen's civil war, which began in 2015.

The complex conflict pits a kaleidoscope of tribes, military units and political factions against each other in chaotic rivalries that have allowed hardline Sunni Muslim militant groups like al-Qaida and Daesh to thrive.

The U.S. provides arms and logistical support to a Saudi-led military coalition that has launched almost daily air strikes against the Houthis to try to restore Yemen's internationally recognized government.

Al-Qaida in Yemen, one of the fiercest branches of the global network, has plotted to down U.S. airliners and claimed responsibility for the 2015 attacks on the office of Charlie Hebdo magazine in Paris.

It has been targeted by U.S. air strikes for a decade.

Daesh, which only launched its first bombing in Yemen as it careered toward civil war in March 2015, has claimed responsibility for a series of spectacular attacks on military and civilian targets which have killed hundreds of people.

Yakla, one of the sites targeted in the strike, was the site of a U.S. raid in January targeting suspected al-Qaida militants which local medics said killed 30 people including 10 women and children, and also left a Navy SEAL dead.