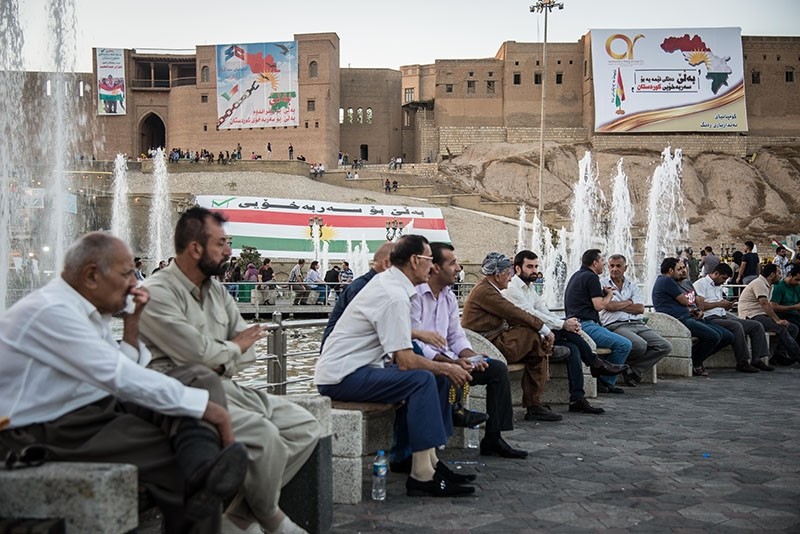 This file photo shows people sitting in a central square in KRG capital Irbil with the city's historic citadel seen in the background, on Sept. 25, 2017. (Photo: Yunus Paksoy / Daily Sabah)
by Daily Sabah with Reuters Oct 23, 2017 12:00 am

Iraq's Kurdistan Regional Government's Parliament decided Tuesday to hold legislative elections in eight months after they were delayed amid tensions over disputed territory with the central government in Baghdad.

The elections would have taken place just over a month after a Sept. 25 referendum in the KRG areas resulted in a massive "yes" for independence.

The opposition has called on incumbent President Masoud Barzani to resign and the electoral commission is reportedly expected to suggest a revised date for elections in the near future.

The presidential and parliament elections in Iraq's autonomous Kurdistan Regional Government (KRG) will not be held as planned on Nov. 1 as political parties did not present candidates, the head of the electoral commission Hendrean Mohammed said Monday.

The commission will refer the matter to parliament to fix a new date, he told Reuters by phone from the regional capital Irbil. The deadline to present candidates expired last week and was extended until Monday.

Despite Barzani's tenure having ended in 2015, he has remained in the post since, citing the ongoing anti-Daesh fight in the region, and has not allowed elections to be held. The regional parliament, which was shut down after 2015, re-opened shortly after the independence referendum, which was held on Sept. 25.

The timing of the controversial Sept. 25 independence referendum held in KRG and areas contested with Baghdad was criticized by KRG opposition parties and neighboring countries, who accused President Massoud Barzani and his ruling Kurdistan Democratic Party (KDP) of trying to raise their declining popularity with the referendum.

As Baghdad moved to retake control of areas captured by KRG's Peshmerga during Daesh's blitz in summer of 2014, KDP rival Patriotic Union of Kurdistan (PUK) chose to not to involve itself in armed clashes with Iraqi forces, retreating to 2014 borders and forcing KDP to follow suit.

The loss of Kirkuk and other contentious areas started a new political debate in KRG, with each party blaming the others for the blunder. While the opposition lambasted the Barzani government for acting fecklessly by ignoring the warnings of an overwhelming majority of countries not to hold the controversial referendum, the opposition has been heavily criticized by the government for "treason," as peshmerga fighters loyal to the Patriotic Union of Kurdistan (PUK) retreated from contested areas without putting up resistance, as a result of alleged negotiations with some countries in the region, particularly Iran.

Meanwhile, the Gorran main opposition party on Sunday called for Barzani's resignation and for the formation of a "national salvation government" amid efforts to deal with the crisis that has pitted the KRG against the central Iraqi government.

Gorran, formed out of the Change Movement, blamed the KRG president for the "disaster" that has faced Iraqi Kurds since the loss of the oil-rich city of Kirkuk city Iraqi forces on Oct. 16.

The Gorran leadership said in a statement published after a meeting in Sulaymaniyah that "[t]he Kurdistan Presidency must be dissolved and a national salvation government should be formed to resolve the current situation."

"They have to resign their posts. At the same time, the Cabinet should be abolished as well," Gorran spokesman Shorsh Haji said at a press conference. "Our people have lost many achievements that they had gained by shedding their blood. Peshmerga [fighters] lost their grandeur. We lost many friendly countries. All of this is the result of the failures of the party in power."