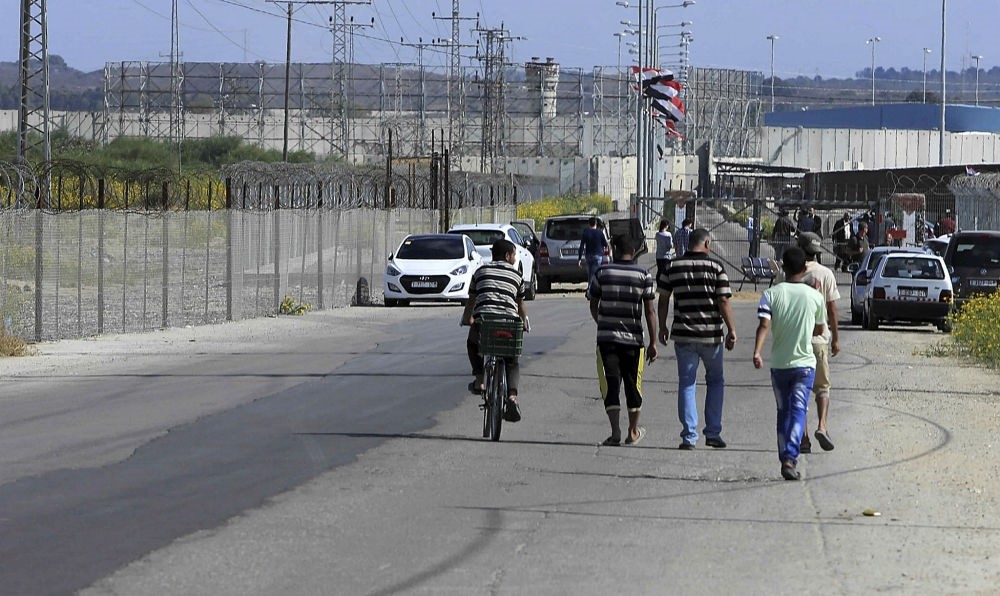 Residents walk toward the Palestinian side of the Erez checkpoint at Beit Hanoun, Gaza Strip, Nov. 1.
by Yusuf Selman İnanç
Nov 03, 2017 12:00 am

Considered a success in the reconciliation process between Hamas and the Palestinian Authority, the former has officially handed over control of three border gates to the PA

Hamas has formally handed over control of the Gaza border to its former rival-turned-ally, Palestinian Authority (PA) in a move widely considered as a concrete step for seeing Gaza under the PA's authority. Key crossings from Gaza into Israel and Egypt will now be under PA control, demonstrating the initial success of reconciliations recently reached between Hamas and the PA. The border control issue is expected to ease Israel's security concerns. Yet a recent attack on a tunnel from Gaza to Israel that killed at least eight, raises doubts on Israel's sincerity as Tel Aviv had been eagerly supporting the reconciliation process.

PA Civil Affairs Ministry spokesman Muhammad Maqadma said: "All the crossings were transferred this morning to the Palestinian National Authority without any problems. … This will make it easier for citizens in many areas: movement, opening the crossings and easing exit from them." The PA's first step was to leave the taxes imposed by Hamas on commodities brought via the Kerem Shalom border gate. Calling the development "a milestone in terms of restoring PA governance for the benefit of Gaza's 2 million inhabitants," PA Prime Minister Rami Hamdallah said the move is "an essential step that we will build on to enable the government and to strengthen its work in restoring the living conditions of our people." Hamas leader Ismail Haniyeh said: "We have handed over the crossings with honesty and responsibility, without bargaining and unconditionally."

According to a Reuters report, "Witnesses said PA officials moved into the Erez and Kerem Shalom crossings on the Israeli border and the Rafah crossing on the Egyptian border, as Hamas counterparts packed up equipment and departed on trucks."

U.N. special coordinator for the Middle East peace process, Nickolay Mladenov, called it a "landmark development," urging for "the positive momentum to be maintained."

The move marks the latest in developments in the reconciliation process. Last year, the two parties held meetings in Moscow, but at the beginning, failed to reach a consensus. Increasing international and internal pressure on Hamas forced it to take initiative, resulting in the change of the party manifest and the main cadre. Hamas declared its new program last May in the Qatari capital of Doha, disavowing itself from the Muslim Brotherhood, distancing itself from aims to destroy Israel and accepting the 1967 borders of the Palestinian state without referring to Israel's legitimate statehood. There are several reasons for the release of Hamas's new program, namely its attempt to better relations with Egypt to combat Daesh terrorism in North Sinai and to decrease internal pressure coming from the PA.

Despite the fact that Hamas has resisted handing over control of Gaza to a unified government led by the PA, it has not been successful since PA President Mahmoud Abbas has pursued a policy of collective punishment on Gaza residents. Cutting off electricity, limiting the flow of oil and allying with Egypt and Israel on imposing sanctions on Hamas, Gaza was stripped of all opportunities to make its voice heard. In addition, the emergence of extremism in North Sinai and radical groups within Gaza has forced Hamas to give way to Egypt. Hamas also seeks to develop trade in Gaza, which has been embargoed by Egypt and Israel. Thousands of illegal tunnels have been closed by Egypt amid allegations they are used by militants. Still, the Egyptian media has reported that Egyptian officials recently facilitated the transportation of construction and raw materials to Gaza after steps were taken for reconciliation.

Back in 2014, a weeks-long Israeli attack on Gaza killed more than 2,100 Palestinians. Since then, the situation in the enclave has deteriorated as Israel has kept the gates closed. In a similar move, Egypt has also kept its Rafah border gate on lockdown, citing security concerns. Under a constant blockade, Gaza does not have easy access to raw materials or basic necessities due to an array of restrictions. In the latest crisis, the enclave suffered a severe lack of electricity. Due to the low energy supply, people in Gaza predominantly rely on gasoline-fueled generators and solar panels. Hundreds of people recently held a protest against Israel and the PA, as international rights groups and the U.N. warned that there could be a total collapse of basic services. With only three hours of electricity available per day, the U.N. warned that half of Gaza's population is in need of immediate humanitarian aid.