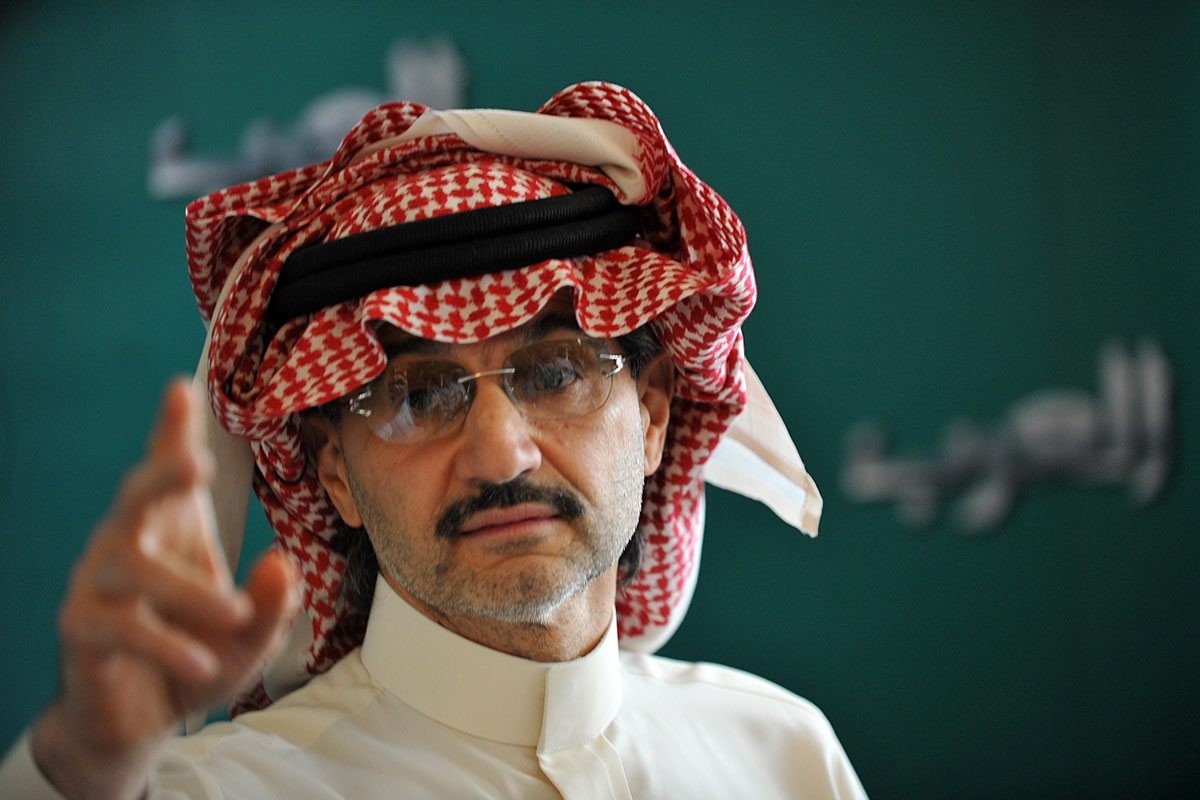 Saudi tycoon Prince Alwaleed bin Talal and two other heads of three Saudi owned prominent television networks were among the high profile figures who were arrested on early Sunday.

Bin Talal, Waleed Al Ibrahim, chairman of Middle East Broadcasting Center, and Sales Kamal, owner of television channel ART and founder of the Dallah al Baraka Group (DBHC), one of the Middle East's largest conglomerates, were arrested along with Prince Miteb bin Abdullah, head of the National Guard and dozens of princes and former ministers in a new anti-corruption probe. Prince Miteb was once considered a contender for the throne.

Talal, the Arab world's richest list with an estimated net worth of $18.7 billion, is the second biggest shareholder of Twitter Inc. He has investments in Apple, Rupert Murdoch's News Corp., Citigroup, and the Four Seasons, Fairmont and Movenpick hotel chains. He is also an investor in ride-sharing services Lyft and Careem, both competitors to Uber in the U.S. and the Middle East, respectively.

The prince, often pictured on his multimillion dollar 85.65-metre (281 foot) superyacht in the Mediterranean, is also known for being among the most outspoken Saudi royals, long advocating for women's rights. He is also majority owner of the popular Rotana Group of Arabic channels.

A high-level employee at Talal's Kingdom Holding Company told The Associated Press that the royal was among those detained overnight Saturday. The employee said he received calls from several security bodies notifying him of the arrest. The employee spoke on condition of anonymity due to fear of repercussions.

Already viewed as the de facto ruler controlling all the major levers of government, from defense to the economy, Saudi Crown Prince Prince Mohammed bin Salman is widely seen to be stamping out traces of internal dissent before a formal transfer of power from his 81-year-old father King Salman.

In September the authorities arrested about two dozen people, including influential clerics, in what activists denounced as a coordinated crackdown.

Analysts said many of those detained were resistant to Prince Mohammed's aggressive foreign policy that includes the boycott of Gulf neighbor Qatar as well as some of his bold policy reforms, including privatizing state assets and cutting subsidies.

Official state media have not reported on the arrests, but the kingdom's top council of clerics issued a statement saying it is an Islamic duty to fight corruption— essentially giving religious backing to the high-level arrests being reported.

The Saudi-owned Al-Arabiya satellite news channel reported that at least 11 princes and dozens of former ministers had been detained in the probe launched by a new anti-corruption committee. The committee is led by Crown Prince Mohammed bin Salman.

The arrests came as Lebanon's prime minister, a close Saudi ally, announced his own resignation from the Saudi capital. Yemeni rebels, the target of a 2 ½ year Saudi-led military campaign, meanwhile fired a ballistic missile toward Riyadh's international airport on Saturday night that was intercepted by Saudi air defense before it could cause any damage.

Al-Arabiya reported that the anti-graft committee is looking into deadly floods that overwhelmed parts of the city of Jiddah in 2009 and the government's response to the Middle East Respiratory Syndrome (MERS) virus that has killed several hundred people in the past few years.

Reports also suggested those detained were being held in the Ritz Carlton in Riyadh, which only days earlier hosted a major investment conference. The phone number for the hotel had been disconnected by Sunday morning and a Dubai-based spokeswoman for the hotel chain did not respond to a request for comment.

The government said the anti-corruption committee has the right to issue arrest warrants, impose travel restrictions and freeze bank accounts. It can also trace funds, prevent the transfer of funds or the liquidation of assets, and take other precautionary measures until cases are referred to the judiciary.

The royal order said the committee was established "due to the propensity of some people for abuse, putting their personal interest above public interest, and stealing public funds."

Saudi nationals have long complained of rampant corruption in government and of public funds being squandered or misused by people in power.

Kristian Coates Ulrichsen, a research fellow at the James A. Baker III Institute for Public Policy at Rice University, said the scale of the arrests are designed to further smooth the young crown prince's eventual succession to the throne.

"As a leader who is set to remain in power for decades, Mohammed bin Salman is remaking the kingdom in his own image and signaling a potentially significant move away from the consensual balancing of competing interests that characterized Saudi rule in the past," Ulrichsen said.

Prince Miteb was replaced by a lesser known royal, Prince Khalid bin Ayyaf al-Muqrin, who had held a senior post with the National Guard.

Prince Miteb's father— the late King Abdullah— also had led the National Guard and had transformed it into a powerful and prestigious force tasked with protecting the ruling Al Saud family, as well as important holy sites in Mecca and Medina, and oil and gas sites.

Prince Miteb was once considered a contender for the throne. His ouster essentially sidelines one of the most formidable rivals to the current crown prince, who is also defense minister. Just three months ago, Prince Mohammed bin Nayef was ousted from the line of succession and from his post as interior minister, overseeing internal security.

Only hours earlier, Lebanese prime minister Saad Hariri resigned from his post in a televised address from Riyadh, offering a vicious tirade against Iran and its Lebanese proxy Hezbollah group for what he said was their meddling in Arab affairs.

"Iran's arms in the region will be cut off," Hariri said.

Saudi Arabia then said its forces intercepted a ballistic missile fired by Iran-backed rebels in Yemen toward one of the kingdom's major international airports on the outskirts of Riyadh. A Saudi-led coalition launched a war against the Houthi rebels and their allies in March 2015 that grinds on today, a campaign overseeing by Crown Prince Mohammed.

The missile fire drew an immediate rebuke from President Donald Trump, who blamed Iran in part for the attack.

"A shot was just taken by Iran, in my opinion, at Saudi Arabia. And our system knocked it down," Trump said, referring to the Patriot missile batteries Saudi Arabia has purchased from the U.S. "That's how good we are. Nobody makes what we make and now we're selling it all over the world."

It's unclear if the U.S. had any advance word of the coming arrests. Trump's son-in-law and White House adviser Jared Kushner and others made an unannounced trip recently to Riyadh. Trump earlier Saturday said he spoke to King Salman about listing the kingdom's massive state-run oil company, Saudi Aramco, in the United States.