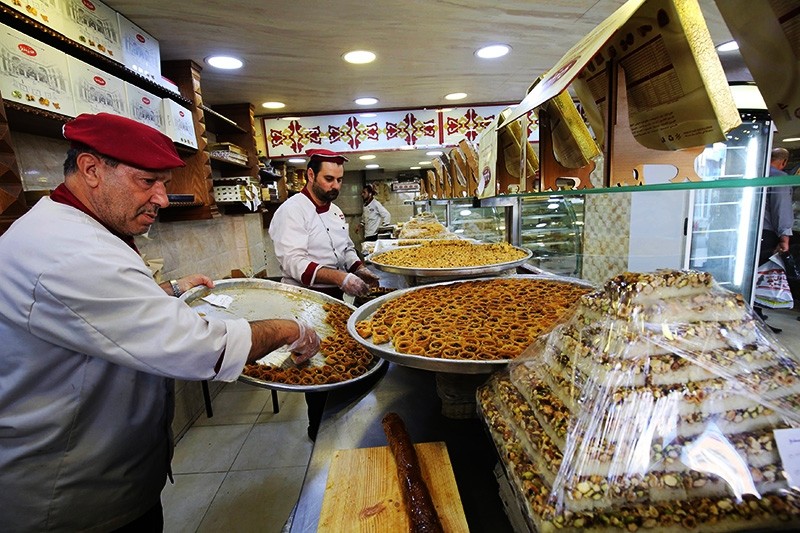 Men work at a shop selling traditional Syrian sweets, that is owned by Syrian refugee Mazen Obeido who fled the conflict in his homeland, in the northern Jordanian town of Irbid. ( AFP Photo)
by French Press Agency - AFP
Nov 05, 2017 12:00 am

Aromas of orange blossom, almond and coconut waft from the northern Jordan shop of Mazen Obeido, a 42-year-old Syrian who never imagined he would prosper again far from home.

"In Damascus I had several shops and everything was fine, but a year after the outbreak of the war, I left everything behind," said the master pastry chef and father of three who said he no longer felt safe in his home country.

So he decided to start again from scratch and hired a property in Irbid north of Amman, half of which became his kitchen and the other half the shop.

Jordan hosts about 650,000 people who have fled from neighbouring Syria because of the conflict that erupted there in 2011, according to the UN High Commissioner for Refugees (UNHCR).

The authorities in Amman say the number is double that -- at 1.3 million.

According to the UNHCR, more than 80 percent of Syrian refugees in Jordan live below the poverty line.

"I worked night and day without stop," said Obeido, whose efforts have paid off and meant he could again expand.

"I opened a second shop, then a third, a fourth and then a fifth," he said, proud to continue a trade that was passed down from father to son.

Sesame cakes, baklava, semolina cakes sprinkled with pistachios or traditional ice-cream -- he makes and sells in Jordan the same products that used to be displayed on large trays in his stores in Syria.

There, "Jordanians came in their dozens to my shops. At weekends, they bought up 90 percent of my pastries which were much cheaper than in Jordan," he recalled.

Syria was once a gourmet's paradise, with its barazek -- small biscuits sprinkled with pistachio and sesame seeds -- its mabrouma baklava rolls and its cheese sweets.

In his bakeries and shops where Obeido employs around 100 people, mostly Syrians, his delicacies are created with special implements from his homeland.

"Bringing them to Jordan by air cost a lot, but the results are incredible."

He is delighted that many compatriots who have learned the trade thanks to his help have gone into business outside Jordan by opening pastry shops in Turkey, France, Germany and as far away as Canada and the United States.

Recalling the proverb that it is better to teach someone how to fish rather than give him a fish, Obeido said he wants to help his fellow Syrians, hundreds of thousands of whom have fled the war.

"I want to teach them the trade so they can live in dignity -- I want them to learn how to fish for themselves," he said.

With the help of the International Labour Organization (ILO), Obeido has begun free training sessions for the most vulnerable refugees, such as widows and girls with no means of support.

"I love my work -- the smells here are a constant reminder of my country," said 22-year-old Haifa al-Ali from Aleppo, Syria's one-time commercial capital.

A nurse she underwent three months' training before joining one of Obeido's pastry kitchens.

Even though pastries prepared in Jordan are a reminder of home, "they taste different at home in Syria, with family and friends," said teacher and mother of three Arwa Nabulsi, summing up the frustration felt by her compatriots forced into exile.