A still image taken from a video distributed by Yemen's pro-Houthi Al Masirah television station on November 5, 2017, shows what it says was the launch by Houthi forces of a ballistic missile aimed at Riyadh's King Khaled Airport. (REUTERS Photo)
by Compiled from Wire Services
Nov 06, 2017 12:00 am

Saudi Arabia said on Monday that Lebanon had declared war against it because of attacks against the Kingdom by the Lebanese Shi'ite group Hezbollah.

Saudi Gulf affairs minister Thamer al-Sabhan, in an interview with Al-Arabiya TV, said the Lebanese government would "be dealt with as a government declaring war on Saudi Arabia".

Sabhan said this message had been delivered to the Saudi-allied Lebanese politician Saad al-Hariri, who declared his resignation as the country's prime minister on Saturday in a broadcast from Saudi Arabia.

Hezbollah acts of "aggression" on the Kingdom "were considered acts of a declaration of war against Saudi Arabia by Lebanon and by the Lebanese Party of the Devil", he added.

Hariri cited an assassination plot against him in the statement announcing his resignation, and launched a scathing attack against Iran and Hezbollah for sowing strife in the Arab world.

The crisis has pitched Lebanon back into the forefront of a regional struggle between Saudi Arabia and Iran, which has also played out in Syria, Iraq, Bahrain and Yemen.

There was no immediate comment from the Lebanese government.

For years now, Lebanon has been deeply divided between a camp dominated by Shiite, Tehran-backed Hezbollah and a Saudi-supported movement led by Hariri. The rift in Lebanon's political ranks led to the 2005 assassination of Hariri's father Rafik, a tremendously influential tycoon who made his fortune in Saudi Arabia.

Other political assassinations ensued in the anti-Hezbollah camp which led to a month-long war between the powerful militia and neighboring Israel, as well as violent internal clashes that harked back to the dark days of the 1975-1990 Lebanese civil war.

Twelve years on, Lebanese politics still remain just as toxically sectarian, and the threat of another flare-up is very real. Hariri even said on Saturday that he fears going down the same path of his father. His resignation came in the context of high tensions between Saudi Arabia, once the region's powerhouse, and Iran, which has recently been playing an increasingly prominent political and military role in the region.

Since the devastating war between Israel and Hezbollah in 2006, Israeli politicians have recently ramped up their rhetoric, warning that Israel's military is prepared for war with Lebanon. 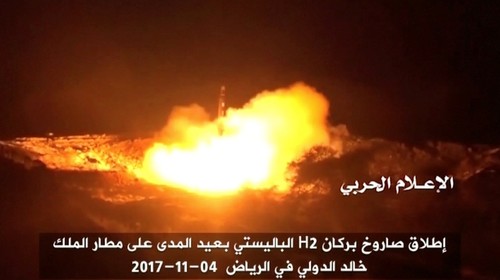 Meanwhile tensions have also been rising between Saudi Arabia and Iran, which back opposing sides in wars and power struggles from Yemen to Syria.

On Monday, a Saudi-led military coalition battling Tehran-backed rebels in Yemen said it reserved the "right to respond" to a missile attack on Riyadh at the weekend, calling it a "blatant military aggression by the Iranian regime which may amount to an act of war".

"Iranian interventions in the region are detrimental to the security of neighboring countries and affect international peace and security," he tweeted. "We will not allow any infringement on our national security."

"KSA bombs Yemen to smithereens, killing thousands of innocents including babies, spreads cholera and famine, but of course blames Iran," he wrote.

"KSA is engaged in wars of aggression, regional bullying, destabilizing behavior & risky provocations. It blames Iran for the consequences."

It was the first reported Houthi strike to reach Riyadh and threaten air traffic, underscoring the growing threat posed by the conflict on Saudi Arabia's southern border.

The coalition on Monday sealed off the air, sea and land borders of Yemen, where it has been battling rebels in support of President Abedrabbo Mansour Hadi's internationally recognized government since 2015.

Two humanitarian aid flights to Yemen had to be put on hold, the United Nations said.

Ghassemi said the missile was fired by the Houthis in response "to war crimes and several years of aggression by the Saudis".

The missile attack was "an independent action in response to this aggression," he said, adding that Iran had nothing to do with it.