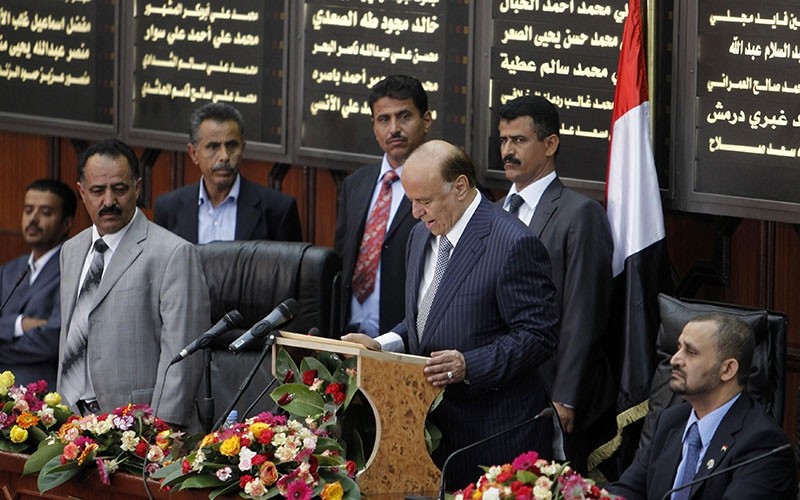 Saudi Arabia has barred Yemen's president, along with his sons, ministers and military officials, from returning home for months, Yemeni officials told The Associated Press, a sign of how much the leader-in-exile has been deeply weakened in a war fought in his name by the Saudi-led coalition against rebels in his country.

The officials said the ban was prompted by the bitter enmity between President Abed Rabbo Mansour Hadi and the United Arab Emirates, which is part of the coalition and has come to dominate southern Yemen, the portion of the country not under rebel control. Hadi and much of his government have been in the Saudi capital Riyadh for most of the war.

Saudi Arabia and the UAE are the two main pillars of the coalition, which is ostensibly defending Hadi's government and is battling the Shiite rebels known as Houthis.

The coalition has waged an air campaign against the rebels since 2015, and the UAE has a strong military presence in southern Yemen, but the Houthis still control the north.

Saudi Arabia intensified its blockade on Yemen Sunday, closing down all traffic to Yemen's air and sea ports and closing land crossings. A U.N. agency warned ships to depart Houthi-controlled ports, and flights to the only functioning airports in southern Yemen were canceled. As night fell, prices of fuel hiked in Sanaa with some petrol stations closed and drivers queued to fill in their tanks fearing worsening fuel shortage.

The coalition move came after the Houthis fired a missile toward Riyadh, their deepest strike into the kingdom.

Hadi's inability to get back to southern Yemen underscores the president's loss of authority — even in the south that is nominally under his administration.

Since Hadi last left Yemen in February, he has repeatedly sent written requests to Saudi King Salman asking to return. None were processed, said a Yemeni security commander.

In August, Hadi even went to Riyadh airport, planning to return to his temporary capital, Aden, in southern Yemen, but he was turned back from the airport, the commander said. Two other Yemeni officials confirmed Hadi, his sons and several ministers with him in Riyadh have been prevented from going to Yemen. They spoke on condition of anonymity because they were not authorized to discuss the situation.

"The Saudis have imposed a form of house arrest on them," the commander said. "When Hadi asks to go, they respond it's not safe for him to return as there are plotters who want to take his life and Saudis fear for his life."

Coalition Spokesman Col. Turki al-Malaki referred any questions related to Hadi to his own office and government. Attempts to reach Yemen's foreign minister and government spokesman were unsuccessful.

Initially, the passports of several of Hadi's officials were seized — though not Hadi's — the commander said. They were given their passports back but they still can't leave, he said.

Hadi's situation mirrors that of his predecessor, Ali Abdullah Saleh, the powerful former president who was ousted in 2011 and then joined ranks with the Houthis to take over the capital Sanaa in 2014. Their alliance appeared to fray this year, amid reports the Houthis have put Saleh under house arrest.

Hadi's weakening has gone hand-in-hand with the UAE's growing power in southern Yemen.

The Gulf nation has trained, financed and armed militias in Yemen that only answer to it, set up prisons, and created a security establishment parallel to Hadi's government. An AP investigation in the summer documented 18 secret prisons run by the UAE or its allies, where former prisoners said torture was widespread. The UAE denied the allegations and says all security forces are under Hadi's authority.

The Emiratis distrust Hadi, accusing him of corruption and opposing his alliance with the Islah Party, Yemen's branch of the Muslim Brotherhood, according to the three officials and a politician close to Hadi.

In an attempt to move against UAE, Hadi held a meeting on Nov. 2 to discuss a cabinet reshuffle to push out Emirati-backed members, but so far there have been no results from the meeting. The commander said Hadi is reluctant to defy Saudi Arabia because he "doesn't want to lose the Saudis."

Meanwhile, the coalition blamed Iran for Saturday's Houthi missile strike toward Riyadh, saying it could be "considered as an act of war." Iran supports the Houthis but has denied arming them and said it had nothing to do with the missile launches. The Houthis have said their missiles are locally produced.

The coalition's intensified closure could further limit access for the delivery of humanitarian aid to the Arab world's poorest country, which has been devastated by more than two years of conflict. The war has killed more than 10,000 civilians, has driven 3 million people from their homes, and millions of Yemenis are left without basic necessities.

Yemen's main international airport, in the rebel-held capital, Sanaa, has been closed since August 2016 by order of the coalition. The rebel-held north has largely relied on the Red Sea port of Hodeida, which is controlled by the Houthis, for delivery of much-needed humanitarian aid and fuel supplies. A full blockade of the port would cut off a crucial lifeline for the Houthis, as well as millions of civilians.

As night fell, Sanaa residents said that several gas stations were shut down while port officials said that ships heading to the port were ordered to leave.

"All vessels must immediately leave holding area," read an email sent by a UN agency in charge of giving clearance to ships docking in Yemeni ports of Hodieda and nearby Salef.