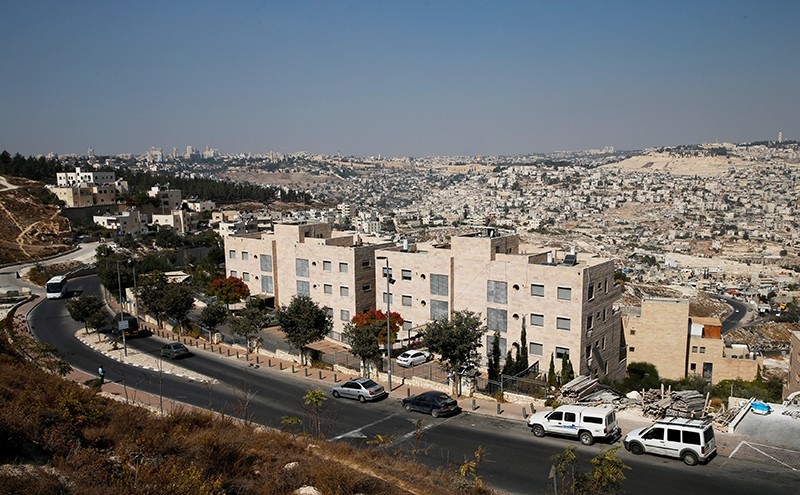 A general view shows Nof Zion, a Jewish settler enclave (foreground) located in the heart of the Palestinian neighbourhood of Jabel Mukaber, in East Jerusalem October 25, 2017 (Reuters Photo)
by Nov 08, 2017 12:00 am

A city planning committee approved 90 units in Gilo and another 150 in Ramat Shlomo, Turjeman said, the latest in a series of moves to enhance Jewish presence in the contested Israeli-annexed Palestinian sector of the city.

Turjeman noted the committee also approved 44 units for Palestinians in their neighborhood of Beit Hanina.

The Ramat Shlomo units are part of plans announced in 2010 to build 1,600 settler homes in Ramat Shlomo, an ultra-Orthodox Jewish neighborhood in east Jerusalem.

Wednesday's approvals were granted weeks after the same committee voted on an expansion creating the largest Israeli settlement within a Palestinian neighborhood in the city.

Jerusalem's status is ultra-sensitive and central to the Israeli-Palestinian conflict.

Earlier this month, the Israeli ministers were set to approve a bill absorbing major Israeli settlements currently in the occupied West Bank into Jerusalem by enlarging the city limits.

Its opponents argue that it is a step toward full unilateral annexation of the West Bank settlements affected -- a move that would be sure to spark international outrage.

But opposition from U.S. President Donald Trump's administration prompted Israeli Prime Minister Benjamin Netanyahu to remove the bill from the agenda, with an official saying "diplomatic preparation" was needed.

The White House has been seeking ways to restart long-stalled Israeli-Palestinian peace talks, and a U.S. official said the bill would "distract the principals from focusing on the advancement of peace negotiations."

"Jerusalem residents deserve to live in a safe and thriving city, which will only happen once there's a fair agreement that recognizes the Israeli and Palestinian ownership of the city," the organization's Aviv Tatarsky told AFP.

"Instead of advancing such an agreement, Israeli authorities continue with the same familiar unilateral moves that only distance it," he said.

It sees the entire city as its indivisible capital, while the Palestinians want the eastern sector as the capital of their future state.