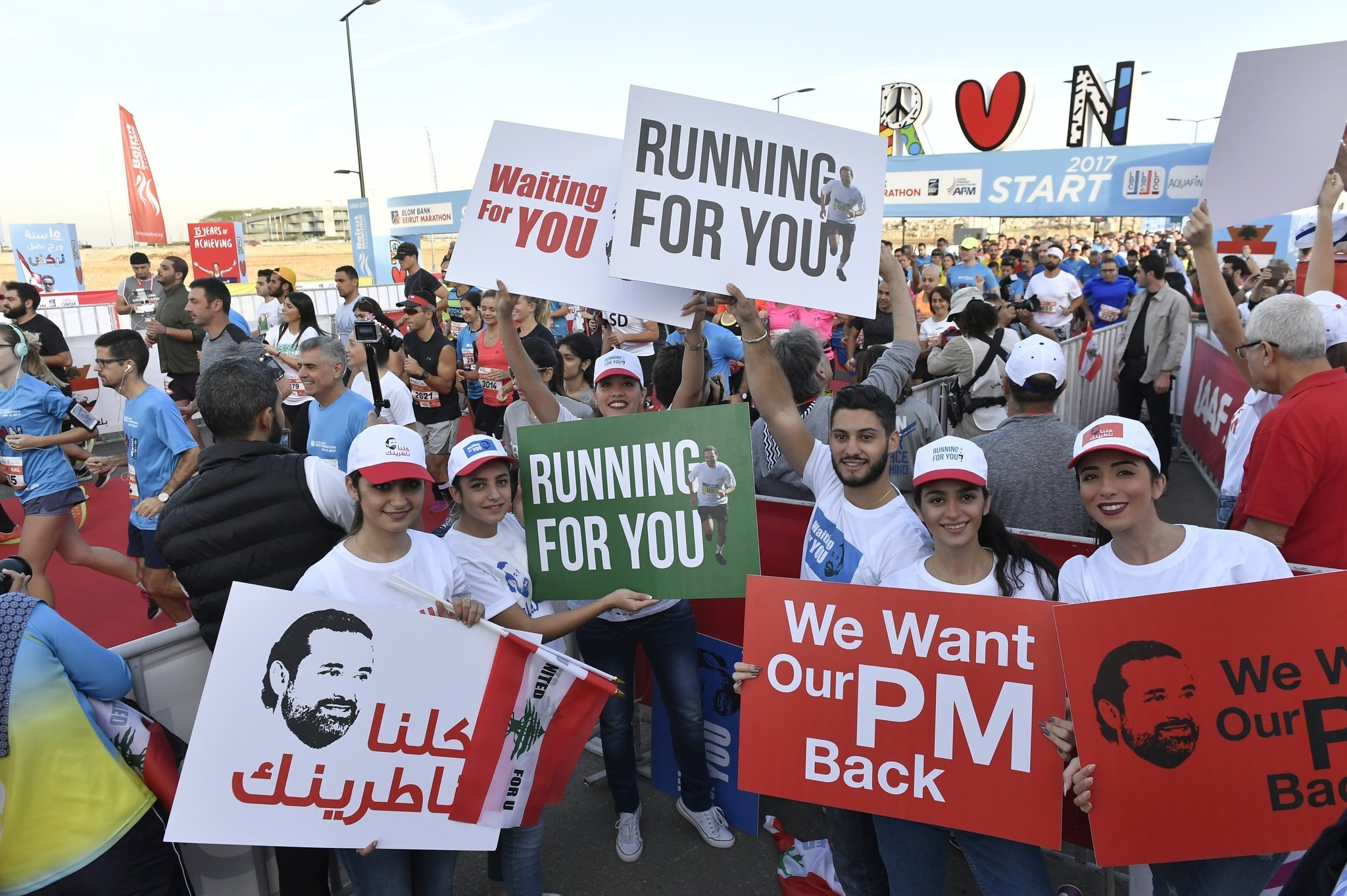 Thousands of Lebanese taking part in the country's annual marathon used the event to call on Prime Minister Saad Hariri to return home after he resigned under mysterious circumstances during a visit to Saudi Arabia.

Hariri was a regular participant in the marathon, giving the international sports event a big boost. This year, President Michel Aoun had encouraged runners to call on Hariri to return. Many Lebanese suspect he was placed under house arrest as part of a Saudi plan to wreck a coalition government he had formed with Hezbollah last year.

A dual Lebanese-Saudi national and an ally of Riyadh, Hariri unexpectedly announced his resignation on Nov. 4 in a pre-recorded message broadcast on Saudi TV, criticizing Iran and Lebanon's Hezbollah militant group, and saying he feared for his safety. His father, former Prime Minister Rafik Hariri, was killed by a car bomb in Beirut in 2005. His family lives in Riyadh.

Spectators along the 26.2 mile (42.2 kilometer) course wore hats and held signs reading "Running for you" and "Waiting for you." Large billboards with pictures of Hariri rose overhead, and a local TV station re-aired an hour-long profile and interview with Hariri recorded last year.

One woman raised a placard reading: "We want our prime minister back."

Ibrahim al-Masri, a 37-year old Hariri supporter, said the Lebanese don't know if the prime minister is staying in Saudi Arabia by choice.

"Whatever he chooses, we are with him. We want him to first come to Lebanon. We will die for him," al-Masri said.

Joanne Hamza, a physical education teacher who was wearing a cap with a picture of Hariri on it, said he was missed at the race.

"But in a sense, his absence has been unifying. All Lebanese, from all sects, are missing their leader. This is somehow reassuring but we still want him with us."

Aoun called on Saudi Arabia Saturday to clarify the reasons why Hariri has not returned home since his resignation. "The obscurity regarding Hariri's conditions makes anything that he says or does not reflect truth," the president said.

Saudi Arabia has stepped up its rhetoric against Hezbollah and its patron, Iran, accusing both of supporting Shiite rebels in Yemen known as Houthis. A Saudi-led coalition has been at war with the Houthis since March 2015.

Saudi Arabia has asked its citizens to leave Lebanon, and many Lebanese fear further economic sanctions or even military action against their country.

"It was a shock for the country, and already the country was suffering economically," said Ziad Zakka, a 52-year-old engineer who took part in the race. "Nobody knows what the future will hold for Lebanon so we need to have him back as soon as possible before it's too late."

Samir, a 42-year old banker, was running with his 11-year old son. He said he fears for his children, and has already stocked up on formula for his new baby. He accused Lebanon's politicians of allowing foreign interference, and asked that his last name not be used for fear of repercussions.

"We are tired of wars. We don't want our land to be a place to settle scores and wage wars. It is enough. Have mercy."

Organizers say more than 47,000 participated in the marathon.