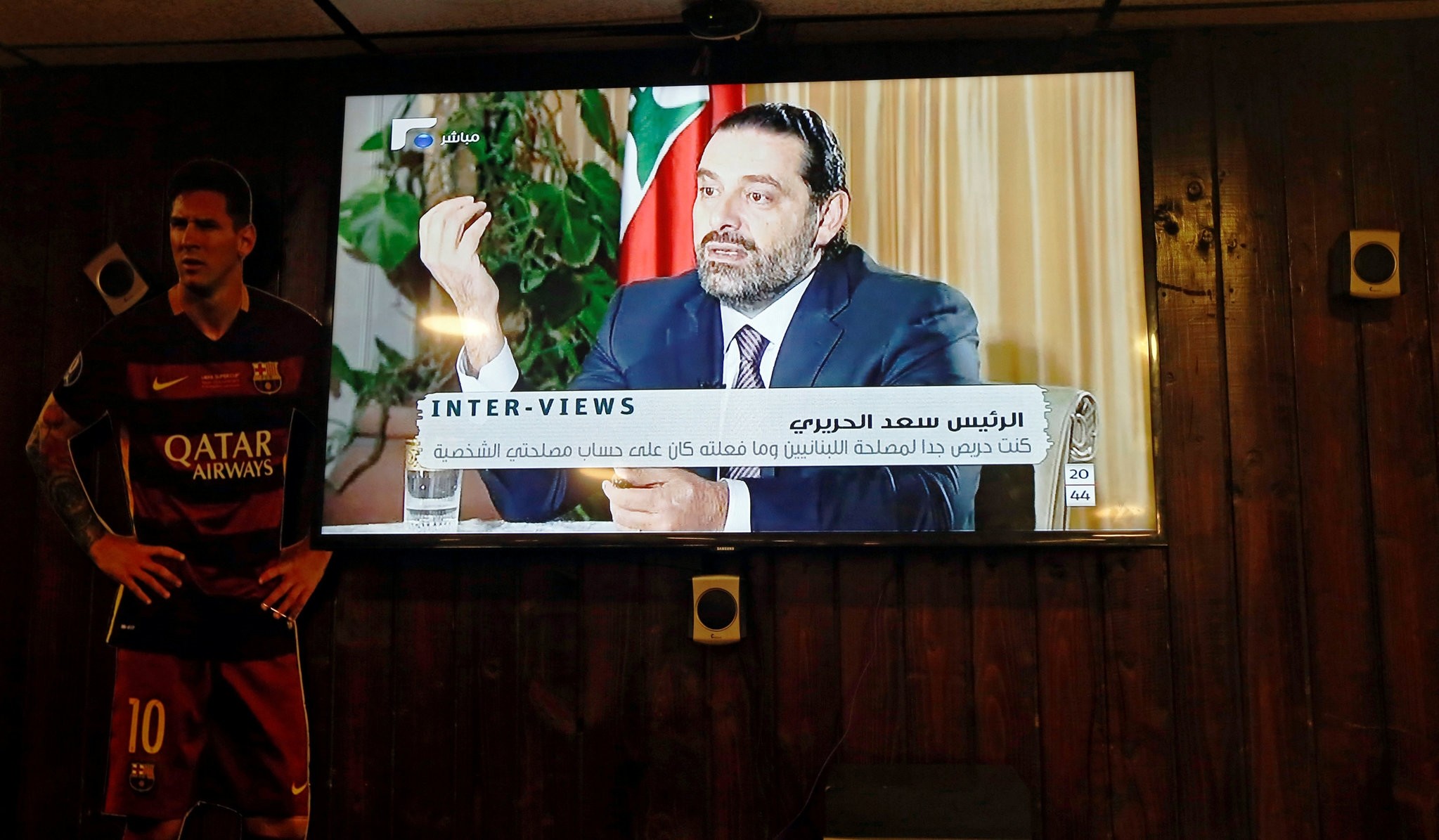 Lebanon's Prime Minister Saad al-Hariri, who has resigned, is seen during Future television interview, in a coffee shop in Beirut, Lebanon November 12, 2017. (REUTERS Photo)
by daily sabah
Nov 12, 2017 12:00 am

Lebanon's former Prime Minister Saad Hariri said he was "free" in Saudi Arabia and will be returning to Beirut "very soon" in his first interview to his own TV station from Saudi Arabia, a week after resigning from the kingdom.

Speaking to his party's Future TV, Hariri said he would "return to Lebanon very soon to initiate the necessary constitutional procedures".

"Yes, it would have been better that I come to Lebanon (to resign) but there was danger," he said.

"I wrote (my resignation) with my own hand. I wanted to create a positive shock, not a negative one."

Wearing a suit and tie and with a Lebanese flag in the background, Hariri looked tired and spoke softly but firmly throughout the interview.

At least five Lebanese TV channels, including Hezbollah's al-Manar and official state TV, said they will not air Hariri's interview in line with the president's position that Hariri is being held against his will and what he says out of Riyadh can't be trusted.

A dual Lebanese-Saudi national and an ally of Riyadh, Hariri unexpectedly announced his resignation on Nov. 4 in a pre-recorded message broadcast on Saudi TV, criticizing Iran and Lebanon's Hezbollah militant group, and saying he feared for his safety. His father, former Prime Minister Rafik Hariri, was killed by a car bomb in Beirut in 2005. His family lives in Riyadh.

But his subsequent week-long absence from Lebanon sparked speculation that he is not free to move or leave the kingdom.

Hezbollah chief Hassan Nasrallah, whose movement is part of Hariri's government but backed by Riyadh's arch-rival Tehran, said Friday that Hariri was "detained in Saudi Arabia, he is banned from returning to Lebanon."

Lebanese President Michel Aoun, a figure who shares warm relations with Hezbollah, on Saturday called on Saudi Arabia to "clarify the reasons that have prevented the return of PM Hariri to Lebanon to be among his people and supporters".

He added Sunday that Hariri has been "restricted" in his movements, slamming "the obscure circumstances in which (he) is staying in Riyadh", a presidency statement said.

Hariri has spent the past week in a string of meetings with diplomats and Saudi officials in Riyadh, punctuated by a single trip to Abu Dhabi.