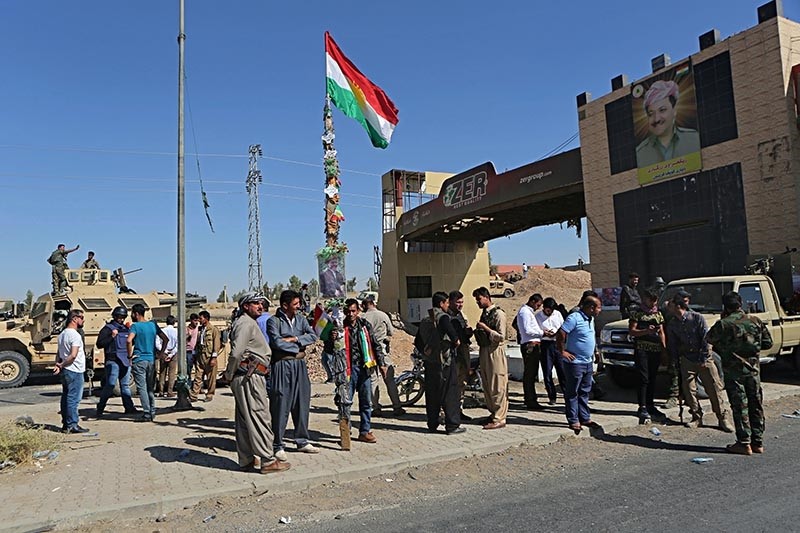 A picture of Massoud Barzani, the President of Kurdistan Regional Government (KRG) displayed as security forces stand guard in Altun Kupri, on the outskirts of Irbil, Iraq, Thursday, Oct. 19, 2017 (AP Photo)
by reuters
Nov 14, 2017 12:00 am

Kurdistan Regional Government (KRG) authorities said Tuesday they would accept a court decision prohibiting the region from seceding, signaling a new phase in efforts to restart stalled negotiations over its future.

The people in KRG-controlled areas voted overwhelmingly for independence in a referendum in September, defying the central government in Baghdad -- which had ruled the ballot illegal -- as well as neighboring Turkey and Iran which have their own Kurdish minorities.

The KRG said Tuesday it would respect the Nov. 6 ruling by the Supreme Federal Court, which declared that no Iraqi province could secede.

"We believe that this decision must become a basis for starting an inclusive national dialogue between (Kurdish authorities in) Irbil and Baghdad to resolve all disputes," the KRG said in a statement.

They included an offensive by Iraqi government forces and the Iran-backed Popular Mobilization Forces last month to wrest back control from the KRG of the oil city of Kirkuk and other disputed territories.

The court is responsible for settling disputes between Iraq's central government and the country's regions and provinces. Its decisions cannot be appealed, though it has no mechanism to enforce its ruling in the KRG region.