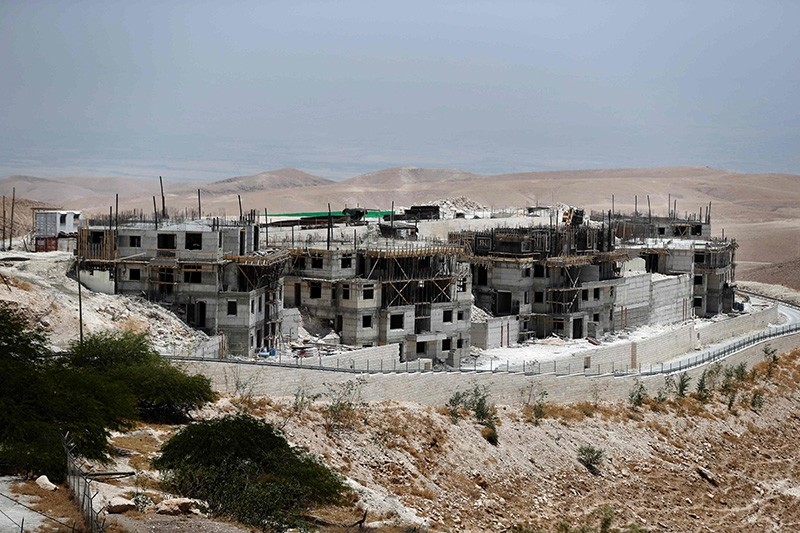 A picture taken on July 4, 2016, shows buildings under construction in the Israeli settlement of Maale Adumim, east of Jerusalem in the occupied West Bank. (AFP Photo)
by French Press Agency - AFP
Nov 16, 2017 12:00 am

An Israeli settlement watchdog Thursday denounced a legal opinion by the attorney general, saying it could pave the way for the seizure of more Palestinian land in the West Bank.

Attorney general Avichai Mandelblit said in a legal opinion that Israel could, in certain circumstances, confiscate private Palestinian land for the benefit of Jewish settlements in the occupied territories.

Settlement watchdog Peace Now denounced the development in a statement.

"It appears that the AG is attempting to remove the last legal (and moral) barrier on the road to turn theft and expulsion into a formal way of establishing settlements in the occupied territories," it said.

Peace Now and other observers said Mandelblit's opinion, which was made public on Wednesday, breaks with former positions the confiscation of private Palestinian land for state use.

Israel occupied the West Bank and east Jerusalem in the Six-Day War of 1967 in a move never recognized by the international community.

Its settlements are deemed illegal under international law and widely seen as the main obstacle to peace.

Mandelblit's legal opinion is tied to Haresha an "illegal outpost" west of the city of Ramallah, on the West Bank, said Peace Now.

It said the attorney general "seeks to approve the confiscation of private Palestinian lands in order to legalize an access road" to Haresha.

"Confiscating the land would constitute a severe violation of international humanitarian law and of the Palestinians' right to own property.

"The AG's legal opinion regarding the access road might lead to additional confiscations of private Palestinian lands," and could "strengthen Israel's hold over Palestinian territory," said Peace Now.

Mandelblit issued his opinion after Justice Minister Ayelet Shaked, a staunch supporter of settlements, urged him to reconsider an earlier legal opinion concerning the road leading to the Haresha outpost.

International law sees all Israel's West Bank settlements as illegal, but Israel distinguishes between those it sanctions and those it does not.

More than 600,000 Jewish settlers live in the occupied West Bank and annexed east Jerusalem among 2.9 million Palestinians, with frequent outbreaks of violence.