Lebanon's Hariri to arrive in France on Saturday to meet Macron, Elysee confirms 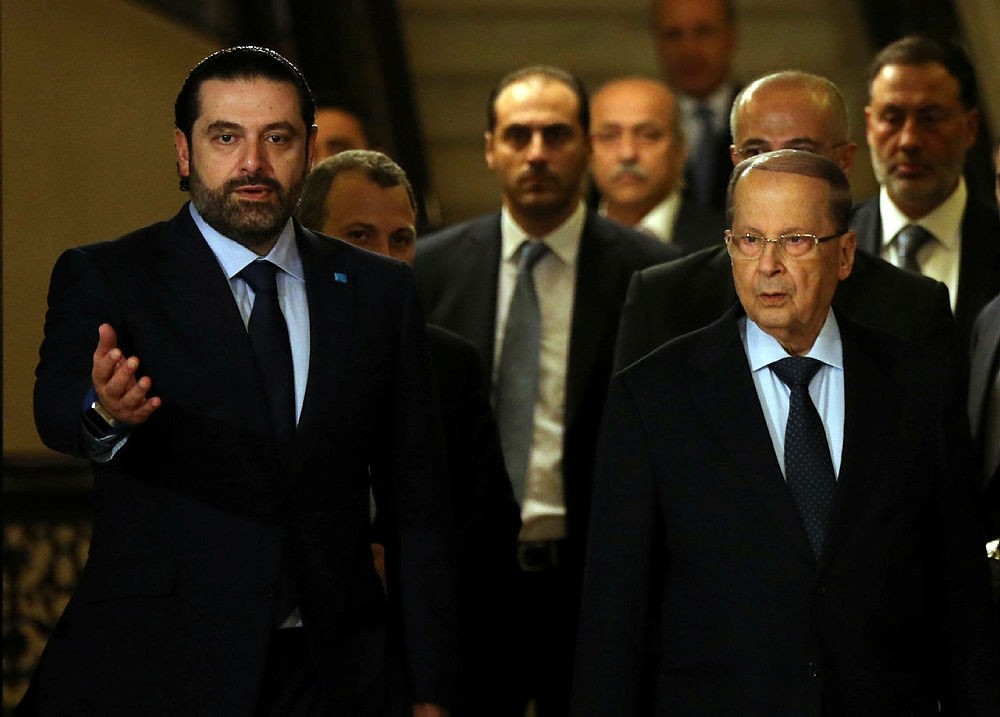 Former Lebanese Prime Minister Saad Hariri, left, welcomes Christian leader Michel Aoun, right, after he announced his support for Aoun to be the Lebanese president, in Beirut, Lebanon.(AP Photo)
by Compiled from Wire Services
Nov 16, 2017 12:00 am

Hariri, who announced his resignation as Lebanon's prime minister during a visit to Saudi Arabia, is travelling to France at the invitation of the French government in a move that diplomats hope will ease regional tensions.

Lebanon President Michel Aoun said Hariri and his family will arrive Saturday in France, "where he will rest for few days" before returning to Beirut to make "a decision regarding the resignation." Aoun's statement was carried by the state-run National News Agency.

Aoun had welcomed Hariri's decision to accept the French invitation, saying he hoped it "opened the door for a resolution" of the political crisis in Lebanon.

"I wait for the return of President (of the council of ministers) Hariri to decide the next move regarding the government," Aoun told journalists. The comments were published on his official Twitter account.

Hariri announced his resignation Nov. 4 in a broadcast from Saudi Arabia. Aoun refused to accept it, accusing the Saudis of holding him against his will. In the broadcast, Hariri cited concerns over meddling by Iran and its Lebanese ally, the Shiite militant group Hezbollah, in regional affairs. He also said he fears for his life.

Saudi Arabia is vying with its rival, Iran, for regional influence, with both countries supporting different groups in Lebanon. Hezbollah is part of Lebanon's coalition government.

In his strongest statements yet about the crisis, Aoun said Wednesday there was no reason for Hariri not to return to Lebanon.

Lebanon's Foreign Minister Gibran Bassil, on a European tour over the crisis, told reporters that "our concern is that he (Hariri) returns and takes the decision that he wants."

Bassil spoke at a news conference in Berlin with German Foreign Minister Sigmar Gabriel, who called the situation in Lebanon "very dangerous."

Bassil warned other countries not to interfere or do anything to threaten the unity and stability of Lebanon, saying "every attack will backfire and will make the entire region suffer."

In the Saudi capital of Riyadh, Saudi Foreign Minister Adel al-Jubeir said the kingdom rejected allegations it was holding Hariri against his will.

"The accusation that the kingdom would hold a prime minister or a former prime minister is not true, especially a political ally like" Hariri, he said at a news conference with his French counterpart, Jean-Yves Le Drian.

Le Drian later met with Hariri, who is a dual Lebanese-Saudi national and has several homes in the kingdom, where his immediate family also lives. A Saudi-owned TV station showed Le Drian chatting in Hariri's home in Riyadh without giving details about the meeting.

"I don't know the source of these accusations. But they are rejected and are baseless and untrue," al-Jubeir said, adding that Hariri is in Saudi Arabia of his own free will and "he leaves when he wants to."

The resignation of Saudi-aligned Hariri was seen as being engineered by Riyadh, raising concerns that it would drag Lebanon, with its delicate sectarian-based political system, into the battle for regional supremacy.

Hezbollah accused the kingdom of seeking to sow chaos in Lebanon.

Al-Jubeir railed against Hezbollah, calling it a "first-class terrorist organization" that should lay down its arms and respect Lebanon's sovereignty. "Hezbollah has kidnapped the Lebanese system," he said.

France, Lebanon's former colonial ruler, has been trying to mediate the crisis.

Macron issued the invitation to Hariri and his family in an apparent bid to end allegations that the prime minister was being held against his will. Le Drian met with Saudi King Salman and Crown Prince Mohammed bin Salman about the crisis.

On Wednesday, the front page of the daily Lebanese Al-Akhbar boasted: "Saudi loses,' hailing the French for their proposal to end the deadlock.