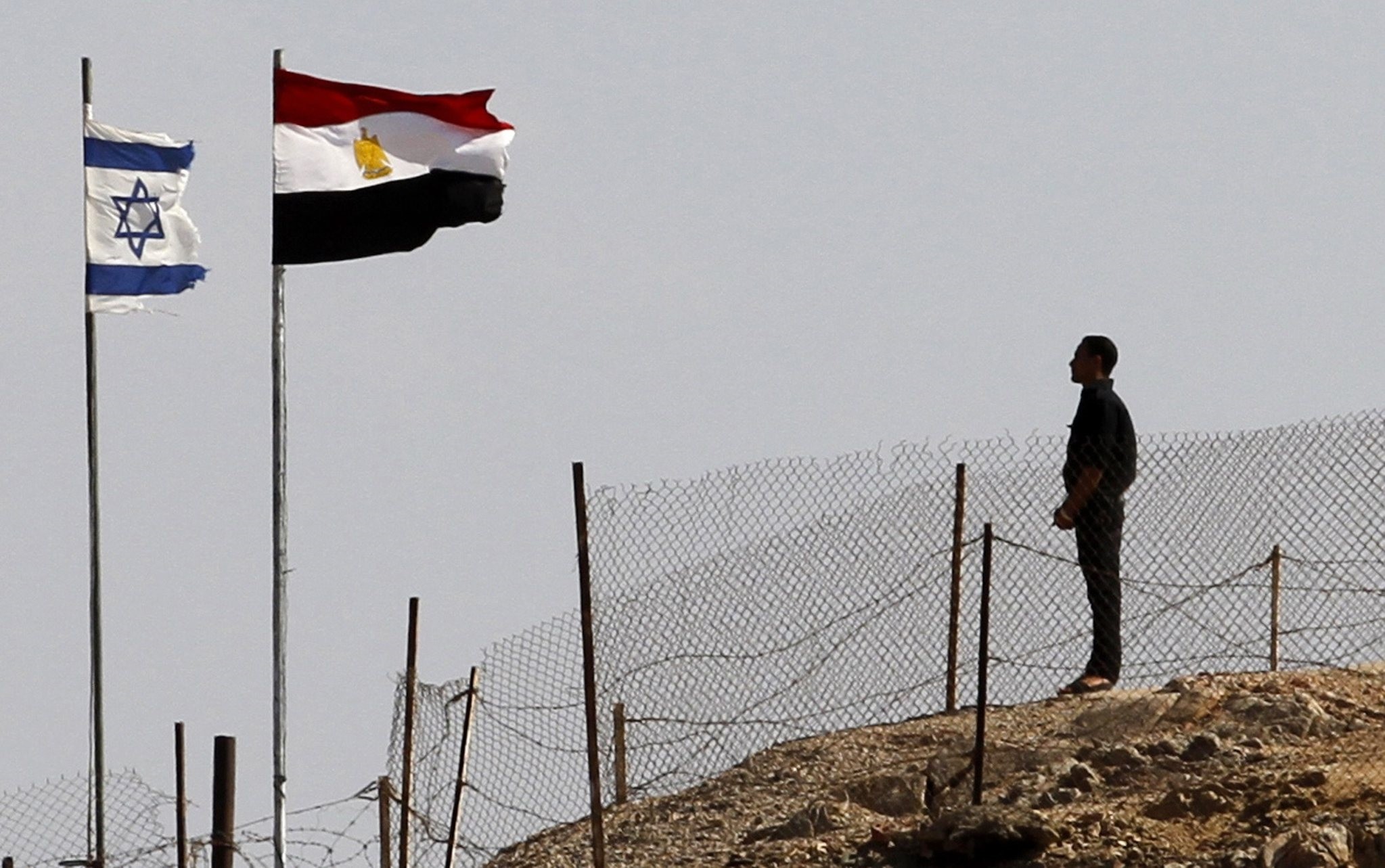 An Egyptian soldier stands near the Egyptian national flag and the Israeli flag at the Taba crossing between Egypt and Israel, about 430 km (256 miles) northeast of Cairo, October 26, 2011. (Reuters Photo)
by Compiled from Wire Services Nov 20, 2017 12:00 am

An Israeli cabinet minister said on Sunday that Israel has had covert contacts with Saudi Arabia amid common concerns over Iran, a first disclosure by a senior official from either country of long-rumored secret dealings.

A rare interview given by the head of Israel's armed forces to a Saudi-owned news site was published on Thursday, further fuelling talk of close links.

It followed previous broad hints by Prime Minister Benjamin Netanyahu and accusations by Hezbollah that Saudi Arabia was pushing Israel to attack the Lebanese group.

"We have ties, some of them secret, with many Arab and Muslim states," Energy Minister Yuval Steinitz told Israeli army radio on Sunday.

"Usually the one who wants those ties to be discreet is the other side," he said in response to a question about ties with Riyadh.

"We respect the wishes of the other side when contacts are developing, whether it is with Saudi Arabia or other Arab or Muslim countries."

The Saudi government had no immediate response to Israeli Energy Minister Yuval Steinitz's remarks. A spokesman for Israeli Prime Minister Benjamin Netanyahu also did not respond immediately to a request to comment.

Although Saudi Arabia and Israel have no official diplomatic relations, they share a common enemy in Iran, with both seeking to limit the country's expanding influence in the Middle East.

Netanyahu has also spoken repeatedly and with pride about growing rapprochement with "moderate Arab states" without naming them, although he is assumed to be referring to Saudi Arabia and other Gulf monarchies.

"I think that this growing closeness and consultation is first and foremost good for security and ultimately for peace," he said.

Tensions between the Saudis and Iran have intensified in recent weeks, with Riyadh-backed Lebanese Prime Minister Saad Hariri saying he is stepping down over what he called Iran's grip on his country.

Iran-backed Hezbollah, which is dominant in Lebanon, is also a great enemy of Israel with which it fought a war in 2006.

Hezbollah leader Hassan Nasrallah said on Nov. 10 that he had "information that Saudi Arabia has asked Israel to strike Lebanon."

Saudi Arabia maintains that any relations with Israel hinge on Israeli withdrawal from Arab lands captured in the 1967 Middle East war, territory Palestinians seek for a future state.

In an interview with Reuters on Thursday, Saudi Foreign Minister Adel Jubeir, asked about reports of cooperation with Israel, cited a Saudi peace initiative, first adopted in 2002 by the Arab League, as key to forging any relationship.

"We have always said that if the Israeli-Palestinian conflict is resolved on the basis of the Arab peace initiative that Israel would have enjoyed normal relations, economic, political, diplomatic relations with all of the Arab countries, and so until that happens, we don't have relations with Israel," he said.

That plan makes those relations contingent on a full withdrawal by Israel from territory it captured in the 1967 Middle East war, including East Jerusalem.

Netanyahu has expressed tentative support for parts of the initiative, but there are many caveats on the Israeli side.

Hussein Ibish, senior resident scholar at the Arab Gulf States Institute in Washington, said Steinitz's remarks "won't surprise anyone who's been paying attention to the budding courtship between Israel and Saudi Arabia, which is being especially pushed by the Israeli side."

Last week, the Israeli military chief, Lieutenant General Gadi Eizenkot, told an Arabic language online newspaper that Israel was ready to share "intelligence information" with Saudi Arabia, saying their countries had a common interest in standing up to Iran.

Saudi Arabia has ratcheted up pressure on Iran, accusing Tehran of trying to expand its influence in Arab countries, often through proxies including the Lebanese Hezbollah group.

Ibish said that given the mutual threat perceptions shared by Israel and Gulf Arab countries, it is unlikely that covert ties aren't developing.

But he said Israeli officials have tended to exaggerate such interactions in a bid to "drive down the price they may have to pay, especially on Palestinian issues, to expand strategic relations and ties with Arab countries."

In public remarks in September, Netanyahu pointed to covert relationships with Arab states, saying, without mentioning any by name that cooperation exists "in various ways and different levels."

In 2016, former Saudi general Anwar Eshki visited Israel, where he met Israeli legislators, to promote - as he has at various academic forums - the Saudi peace initiative.