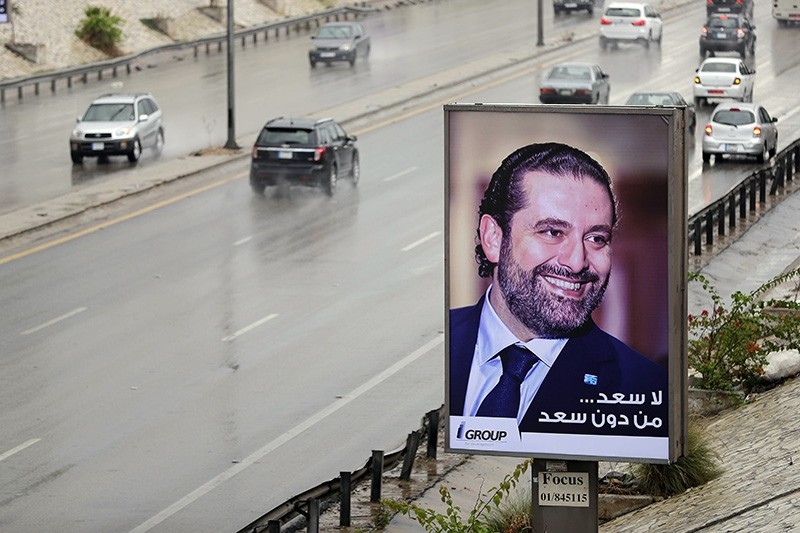 A poster bearing a portrait of Lebanese Prime Minister Saad Hariri reads in Arabic ,There is no hapiness without Saad, is seen on a billboard on Beirut's airport highway, on November 21, 2017 (AFP Photo)
by Compiled from Wire Services Nov 21, 2017 12:00 am

After a three-day visit to France, Lebanese Prime Minister Saad Hariri, who abruptly announced his resignation earlier this month from Saudi Arabia, has left Paris on Tuesday for Cairo, according to French media reports.

​Hariri took off from Le Bourget airport shortly after 1.30 pm (1230 GMT), sources said, asking not to be named. He is due to meet with Egypt's Abdel Fattah al-Sisi before finally heading back to Lebanon following his shock resignation on November 4.

Hariri is expected to meet the Egyptian leader Abdel Fattah al-Sisi to talk about the political crisis caused by his surprise resignation, French radio Europe1 reported.

Lebanon has remained in the throes of an unprecedented political crisis since Hariri announced his resignation on Nov. 4 during a televised address from Saudi Arabia, accusing Iran and its Lebanese ally Hezbollah of sowing "sedition" in the region and "meddling" in Arab affairs. He also mentioned an alleged plot to assassinate him.

The Lebanese president has yet to accept Hariri's resignation, who is expected in Beirut on Wednesday for the celebration of National Day.