Palestine's Fatah, Hamas agree to hold elections by the end of 2018 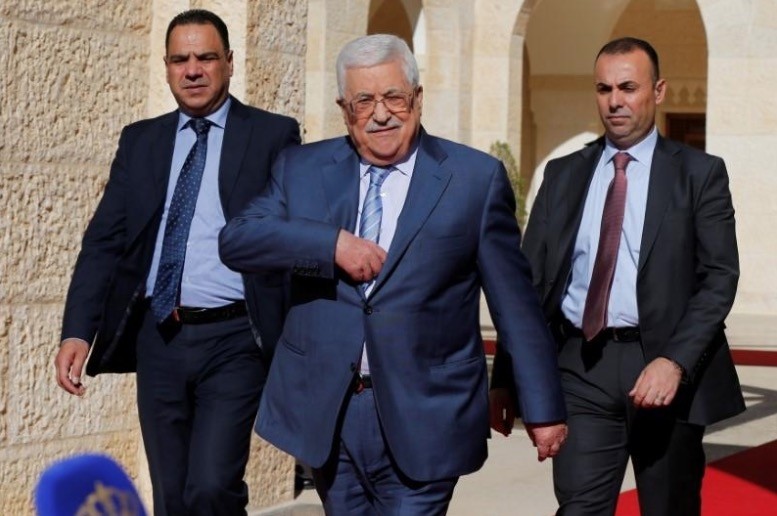 Palestinian President Mahmoud Abbas walks to speaks to the media after his meeting with Jordan's King Abdullah at the Royal Palace in Amman, Jordan October 22, 2017. (Reuters Photo)
by Compiled from Wire Services Nov 22, 2017 12:00 am

Palestinian factions, including rival groups Hamas and Fatah, have agreed to hold a general election by the end of 2018, a joint statement by several groups said on Wednesday following talks in Cairo, and praised the unity deal aimed at ending a long-running dispute.

The call for elections was made in a joint statement at the end of two days of closed-door talks attended by representatives of 13 leading political parties.

The factions called on the electoral commission to prepare for presidential and legislative elections to be held by the end of next year at the latest.

They asked Palestinian president Mahmoud Abbas to set a date for the polls after consulting with all sides.

The factions also praised the unity deal struck between the two largest parties -- Hamas and Fatah -- in October.

The Egyptian-sponsored agreement is aimed at ending the 10-year rift between them, and calls on Hamas to cede power in the Gaza Strip to Fatah by December 1.

The statement said the reconciliation deal between Hamas and Abbas's Fatah party was a "realistic start to end divisions".

It underscored the "importance of removing all obstacles in the path of the government's efforts to immediately assume its responsibilities towards our people".

Salah Al-Bardaweel, a Hamas official involved in the talks, called Wednesday's agreement "vague" and expressed concern that it was unable to progress on key issues such as lifting sanctions imposed by Abbas and secure full opening of the crossing between Gaza and Egypt.

The talks also failed to address security responsibilities in Gaza, which have so far remained in the hands of Hamas-backed security services.

Abbas has said previously that upon assuming control of Gaza he would move to lift sanctions imposed on the impoverished enclave that have included power cuts and salary reductions of 30 percent to some 60,000 Gazans employed by his Palestinian Authority.

"We worked hard to reach practical results ... such as opening crossings and lifting the sanctions and advancing the issue of reconciliation but unfortunately it did not happen," said Bardaweel.

Azzam Al-Ahmed, head of Fatah's delegation to the Cairo talks, said his group insisted Hamas completes full handover of Gaza control to the government by Dec 1. He added that another meeting with Hamas will be held later in December to evaluate further reconciliation steps.

Palestinian officials said Egypt is expected to send a security delegation to Gaza in the coming days to oversee the implementation of the agreement.

There have been no Palestinian parliamentary elections since Hamas seized control of Gaza in 2007 from Fatah, which dominates the Palestinian Authority government in the Israeli-occupied West Bank.

Palestinian and international leaders hope implementation of the unity deal could help ease the hardships of Gaza's two million residents, who suffer from severe poverty and unemployment.

The agreement faces significant stumbling blocks, in particular the future of Hamas's vast armed wing, which has fought three wars with Israel since 2008.

Abbas has repeatedly said he would only accept one military authority in the Palestinian territories, but Hamas officials have refused to disarm.

Israel -- which has maintained a crippling decade-long blockade of Gaza -- has also said it would not accept any Palestinian government that includes Hamas unless it puts down its weapons.

The Fatah-dominated Palestinian government seated in the occupied West Bank city of Ramallah has also refused to remove crippling sanctions on Gaza that include reduced electricity.

U.N. special coordinator for the Middle East peace process, Nickolay Mladenov, told the U.N. Security Council on Monday that, despite the challenges, the reconciliation "must not be allowed to fail".

"If it does, it will most likely result in another devastating conflict," he said.

In a crucial first step, Hamas handed over Gaza border crossings on November 1, and control of a number of government ministries has also been transferred.

The division between Palestinian factions has also been cited as one of the largest obstacles to meaningful peace talks with the Israelis.

The Cairo talks came as the U.S. moved to close the Palestinian diplomatic office in Washington run by the Palestine Liberation Organization (PLO).

Under long-standing US law, permission for PLO to maintain its mission in Washington must be renewed every six months but last week the U.S. State Department refused to renew the permit.

The factions meeting in Cairo denounced the U.S. move, which they see a bid to put "pressure" on the Palestinians to force them to accept US demands in any future peace talks with Israel.