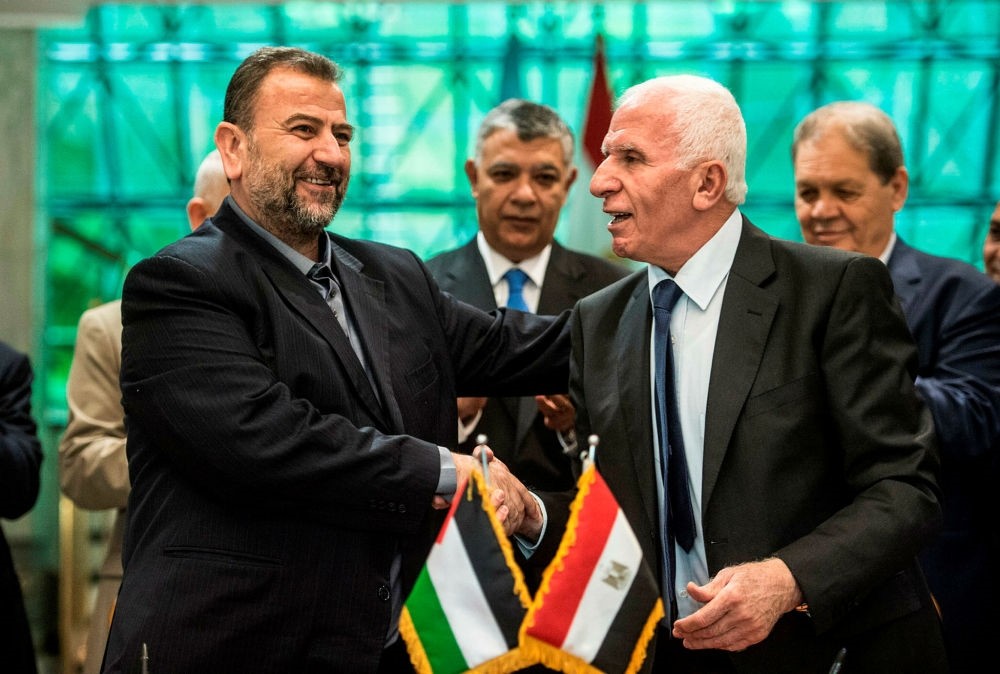 Rival Palestinian factions Fatah and Hamas agreed on Wednesday to delay the final transfer of power over the Gaza Strip from Hamas to the Western-backed Palestinian Authority government by 10 days to Dec. 10 to allow time to "complete arrangements," officials said.

In a brief joint statement, Fatah and Hamas said they had asked Egypt to delay the timetable from Dec 1 so that they could "complete the arrangements to successfully conclude reconciliation steps to which the Palestinian people aspire," Reuters reported.

The announcement came at the last minute as the landmark Palestinian unity deal faltered dangerously, with Fatah and Hamas accusing each other of not respecting the accord.

In previous days, the two sides had traded accusations of failing to respect the Oct. 12 agreement, which was supposed to see Hamas hand over all governing duties in the enclave to the Fatah-dominated Palestinian Authority by Dec. 1.

Sharp disagreements remained between Palestinian President Mahmud Abbas's Fatah, based in the occupied West Bank, and Hamas, particularly over the future of public employees in Gaza and security control of the enclave.

Earlier on Wednesday, tension between the two factions rose when Hamas refused to allow Palestinian Authority employees to return to their jobs at three ministries as instructed by the government. Fatah's top negotiator, Azzam al-Ahmad, told Agence France-Presse (AFP) that Hamas is "not committed to the agreement it signed in Cairo. … Until this moment, the problems and obstacles from Hamas are still there and are increasing." In response, senior Hamas official Bassem Naim accused Fatah of maneuvers to avoid going through with the deal.

Hamas has demanded that Abbas lift sanctions he has imposed on Gaza such as slashing salaries of Palestinian Authority-hired public servants and limiting electricity imported from Israel for Gaza.

The Palestinian Authority has demanded that it must have full control of Gaza in order to be able to discharge its administrative powers there, and failure to pay the salaries could endanger further reconciliation steps.

Multiple previous reconciliation attempts have failed since Hamas seized control of Gaza in 2007. The Cairo deal signed last month is aimed at ending the decade-long feud between Fatah and Hamas.

Hamas has controlled the Gaza Strip since seizing it in 2007 in a near civil war with Fatah, leaving Palestinians with two separate administrations.

A first deadline under the accord was met, with Hamas handing control of Gaza's borders to the Palestinian Authority on Nov. 1. But more difficult issues remain, and a number of previous attempts at reconciliation have failed.

After the 2007 power shift, the Palestinian Authority continued to pay around 60,000 staff in Gaza, despite the vast majority not working.

Hamas has hired around 50,000 civil servants to replace them in the past decade, and the future of those staff members is a key sticking point, with unions insisting on a settlement.

On Tuesday, Palestinian Prime Minister Rami Hamdallah called on employees of the cash-strapped Palestinian Authority to return to their former jobs in the Gaza Strip, with Hamas criticizing the move. The reconciliation agreement stipulates they have until February to find a solution for the employees in Gaza, which could include merging the two civil services.

The future of Hamas's powerful armed wing is another key dispute between the parties, with the group refusing to disarm.