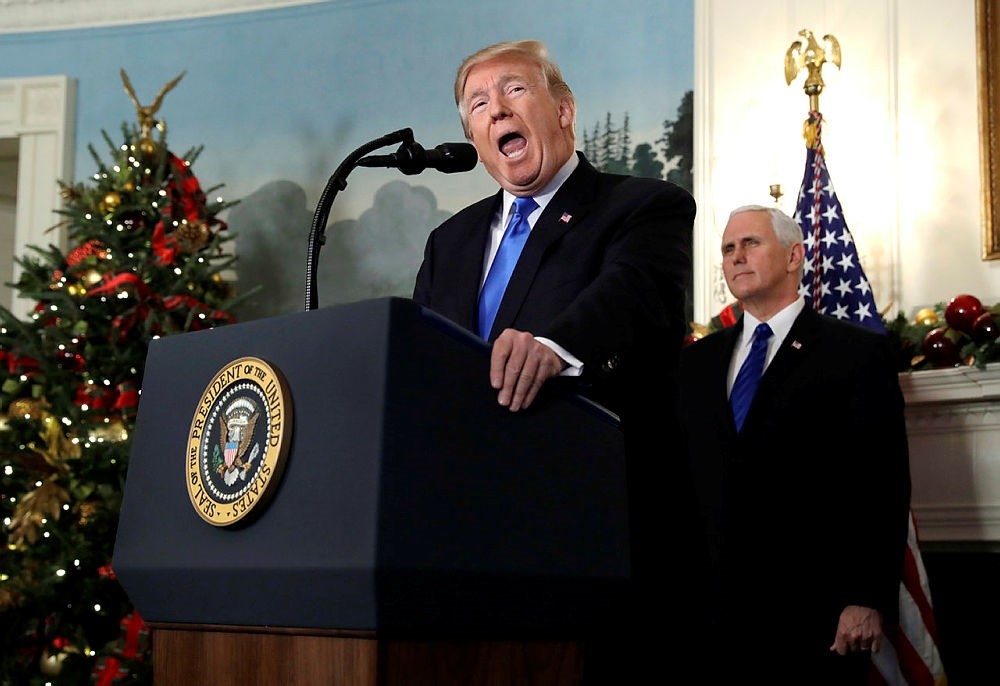 "It is time to officially recognize Jerusalem as the capital of Israel," Trump said during a news conference at the White House.

Trump said his announcement was the "beginning of a new approach to conflict between Israel and the Palestinians."

"I am also directing the State Department to move the American embassy from Tel Aviv to Jerusalem — a magnificent tribute to peace."

Before the announcement most of the international community warned Trump against the move, insisting it would be obstructive to the fragile peace process. Leaders from Turkey, EU, the U.K., France and the Arab League called on U.S. to stick to the international law and numerous U.N. resolutions on the issue.

President Recep Tayyip Erdoğan said Jerusalem was the "red line" for the Muslim world. The city is home to Islam's third-holiest shrine, the holiest ground in Judaism and major Christian sites. Any perceived harm to Muslim claims to the city has triggered protests in the past, in the Holy Land and beyond.

During the announcement, Trump said he did not want to follow suit of previous U.S. president who refused to recognize Jerusalem as the Israeli capital, adding "it would be folly to assume that repeating the exact same formula would now produce a different or better result."

Trump also said that the U.S. was "deeply committed to establishing a peace agreement that is acceptable to both sides" and "would support a two-state solution, if agreed to by both sides."

"I call on all parties to maintain the status quo. Above all our greatest hope is for peace. The incredible potential of this region is held at bay by bloodshed, ignorance and and terror. It is time to expel the extremists in our midst," Trump said.

Announcing the move, Trump cited the Jerusalem Embassy Act, which overwhelmingly passed Congress and became law in 1995 and called for moving the U.S. embassy to Jerusalem during Democrat Bill Clinton's presidency.

But Clinton, and all of his successors until Trump, signed a waiver every six months that suspended the law on the grounds that it would be detrimental to U.S. national security interests.

Following the announcement, Turkey condemned the "irresponsible statement of the U.S. administration," saying it "will have negative reflections on the peace and stability in the region, [and] bears the risk of completely destroying the ground for peace."

U.N. Secretary-General Antonio Guterres insisted there was "no alternative to the two-state solution," while Palestine Liberation Organization (PLO) said Trump's recognition of Jerusalem as Israeli capital destroyed it.

Palestinians are seeking East Jerusalem as the capital of their future state. It was illegally occupied by Israel in 1967 during the Six-Day War.

Many fear that Trump's move would lead to violence and further destabilize the situation between Israelis and Palestinians as well as in the Middle East.