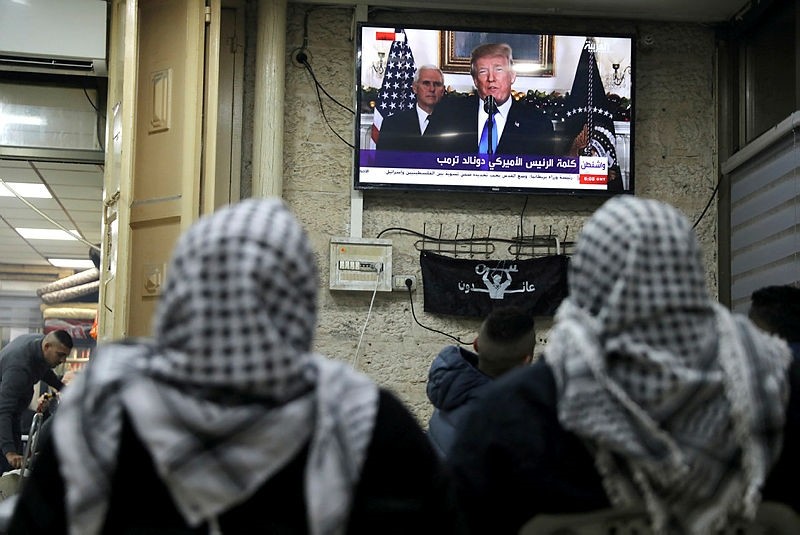 Palestinians watch a televised broadcast of U.S. President Donald Trump delivering an address where he announced that the United States recognises Jerusalem as the capital of Israel, in Jerusalem's Old City, Dec. 6, 2017. (Reuters Photo)
by Daily Sabah with Agencies Dec 06, 2017 12:00 am

The international community has rejected the U.S. President Donald Trump's decision Wednesday to recognize Jerusalem as the capital city of Israel. Trump reversed decades of U.S. policy despite warnings from around the world that the gesture further drives a wedge between Israel and the Palestinians.

The secretary-general of the Palestine Liberation Organization (PLO) said Trump's decision destroys any hopes for a two-state solution to the conflict.

"He destroyed the two-state solution," Saeb Erekat, who long served as the Palestinians top negotiator, told journalists after Trump's speech. Trump "disqualified his country from any role whatsoever" in the peace process, he said. "As a chief Palestinian negotiator, how can I sit with these people if they dictate to me the future of Jerusalem as Israel's capital."

The head of the Palestinian resistance movement Hamas said Trump of disregarded Palestinian feelings with his recognition of Jerusalem as Israel's capital.

Ismail Haniyeh said in a statement that the Palestinian people "know how to respond properly to the disregard of their feelings and sanctuaries," adding that the decision "will not change the facts of history and geography."

Hamas Thursday called for a new Palestinian Intifada in the wake of the U.S. decision to recognize Jerusalem as the Israeli capital. Haniyeh called for Palestinians to launch protests from Friday and for Muslim countries to cut ties with the U.S.

Speaking at a televised news conference in Gaza City, he said: "We call on the Palestinian people to take to the streets on Friday to launch a new Intifada with a view to defending Jerusalem."

Turkey has condemned the "irresponsible statement of the U.S. administration," saying it "will have negative reflections on the peace and stability in the region, [and] bears the risk of completely destroying the ground for peace."

"We call upon the U.S. Administration to reconsider this faulty decision which may result in highly negative outcomes and to avoid uncalculated steps that will harm the multicultural identity and historical status of Jerusalem," Turkish foreign ministry statement said.

The European Union expressed serious concern after Trump recognized Jerusalem as the capital of Israel, saying it could have repercussions for peace prospects.

"The aspirations of both parties must be fulfilled and a way must be found through negotiations to resolve the status of Jerusalem as the future capital of both states," EU Foreign Affairs Chief Federica Mogherini said in a statement.

German Chancellor Angela Merkel said she rejects Trump's move because it undermines efforts to reach a two-state solution between the Israelis and Palestinians.

"The government does not support this stance because the status of Jerusalem is to be negotiated within the framework of a two-state solution," Merkel said through her spokesman, Steffen Seibert.

Prime Minister Theresa May on Wednesday said the British government disagreed with Trump's decision, saying it was "unhelpful" for peace efforts.

"We disagree with the U.S. decision to move its embassy to Jerusalem and recognize Jerusalem as the Israeli capital," she said in a statement. "We believe it is unhelpful in terms of prospects for peace in the region."

French President Emmanuel Macron said he did not support Trump's "unilateral" decision and called for calm across the region.

"This decision is a regrettable decision that France does not approve of and goes against international law and all the resolutions of the U.N. Security Council," Macron told reporters at a news conference in Algiers.

Egypt has denounced the move and said it fears it could provoke instability.

"Such unilateral decisions violate international legitimacy resolutions and will not change the legal status of the city of Jerusalem as being under occupation," the Egyptian Foreign Ministry said in a statement. "Egypt is extremely concerned about potential repercussions of this decision on the region's stability."

Jordan condemned Trump's recognition as amounting to a violation of international law and the U.N. charter.

"The decision of the American president to recognize Jerusalem as Israel's capital and the transfer of the U.S. embassy to this city constitutes a violation of decisions of international law and the United Nations charter," said government spokesman Mohammed Momani.

Momani added that Trump's move is legally null as it "consolidates Israeli occupation on eastern sector of city."

Egypt and Jordan are the only two Arab countries having diplomatic links with Israel.

Iran "seriously condemns" the U.S. decision to move its embassy to Jerusalem, the Islamic Republic said Wednesday in a statement from the Ministry of Foreign Affairs carried by state media.

The move by the U.S. violates international resolutions, the statement said.

Bahrain's Ministry of Foreign Affairs issued a written statement saying the decision threatens the peace process in the Middle East.

According to KUNA, the official agency of Kuwait, the Ministry of Foreign Affairs warned the U.S. president about the decision's dangerous reflections and urged him to reverse the move.

The organization's president, Rabbi Rick Jacobs said in a statement Wednesday that while the reform movement believes "Jerusalem is the eternal capital of the Jewish people" and the U.S. Embassy should be moved from Tel Aviv to Jerusalem, now is not the time.

Yet, despite all these negative responses to the decision, there were also a small number of reactions that support the decision, notably the ones from Israel itself. "The president's decision is an important step toward peace, for there is no peace that doesn't include Jerusalem as the capital of the state of Israel. I share President Trump's commitment to advancing peace between Israel and all of our neighbors, including the Palestinians," said Israeli Prime Minister Benjamin Netanyahu.

The Czech Republic also supported Trump, saying it recognized Jerusalem as Israel's official capital but also the capital of a future Palestinian state Wednesday, following the controversial move from the U.S. administration to become the first country to do so.