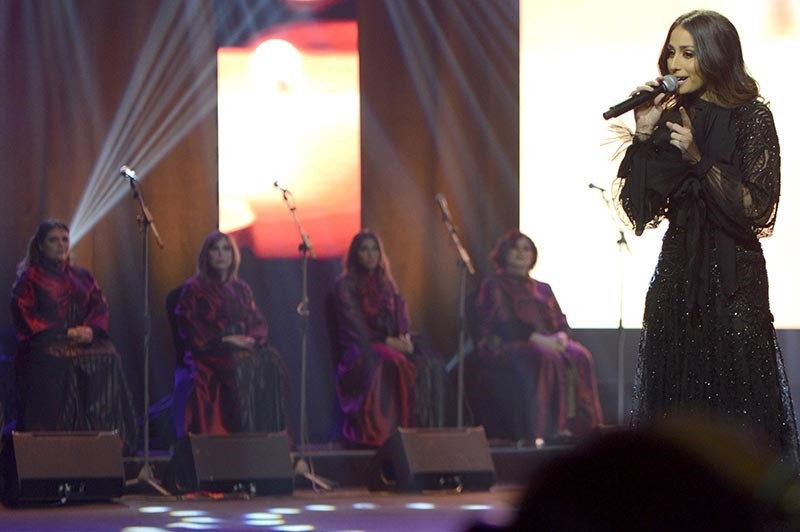 A picture taken late on Dec. 6, 2017, shows Lebanese singer Hiba Tawaji performing during the first ever female concert in the capital Riyadh at the King Fahd Cultural Center in the Saudi capital Riyadh. (AFP Photo)
by French Press Agency - AFP
Dec 07, 2017 12:00 am

Tawaji performed to a packed audience at the cavernous King Fahd Cultural Center late Wednesday, the latest in a series of concerts by international artists as the austere kingdom seeks to boost entertainment options.

"I came especially from Jizan to watch this concert," said Nafees Awad, a university student from the southern province, more than 950 kilometers (590 miles) from Riyadh.

"We are so happy to watch such a concert, it's the first time" in Riyadh, she added.

The concert highlights how the kingdom is easing some of its tight restrictions on women.

"It's good that women's existence is being recognized," Salma, a university student, told The French Press Agency at the concert.

Saudi Arabia in recent months has organized concerts, a Comic-Con pop culture festival and a mixed-gender national day celebration that saw people dancing in the streets to thumping electronic music for the first time.

The social reform, part of Prince Mohammed bin Salman's "Vision 2030" program for a post-oil era, stems partly from an economic motive to boost domestic spending on entertainment as the kingdom reels from an energy slump.

Saudis splurge billions of dollars annually to see movie shows and visit amusement parks in the neighboring tourist hubs of Bahrain and Dubai.