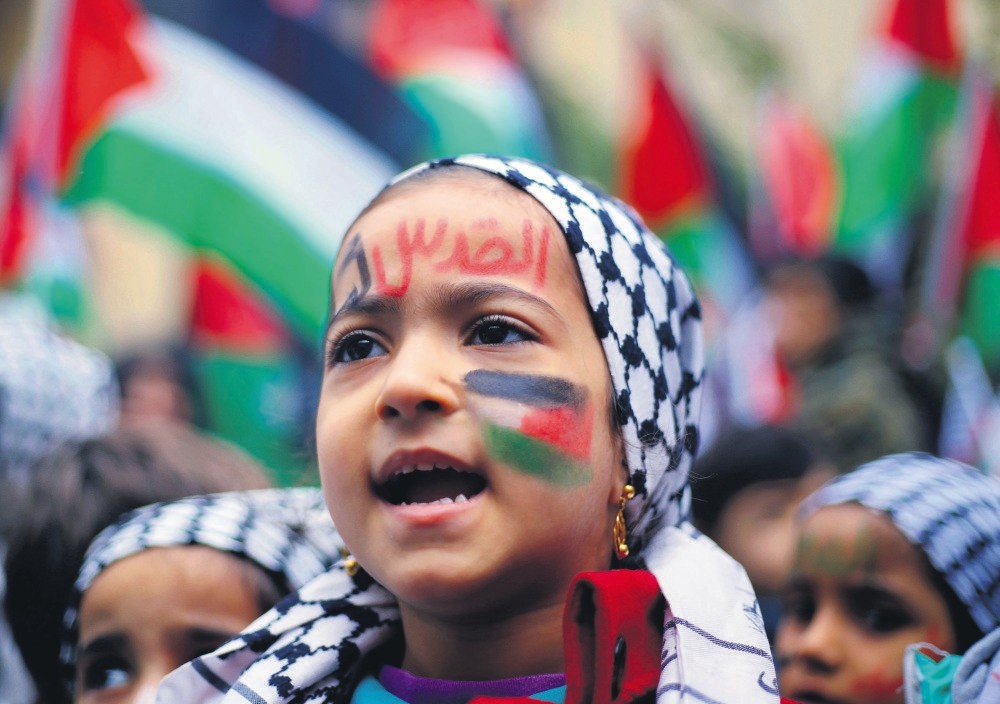 A girl with a Palestinian flag and ,Jerusalem is for us, painted on her face in Arabic, chants slogans during a sit-in in the Bourj al-Barajneh Palestinian refugee camp in Beirut, Lebanon Dec. 6.
by Daily Sabah with Agencies Dec 07, 2017 12:00 am

The international community has voiced concern and opposition to President Trump's decision to move the U.S. Embassy from Tel Aviv to Jerusalem and recognize the city as Israel's capital, arguing it will deepen the Israeli-Palestinian conflict and further trigger regional turmoil

International concerns continue to rise over U.S. President Donald Trump's expected recognition of Jerusalem as the capital of Israel instead of Tel Aviv and relocate the U.S. Embassy, with world leaders fearing that it would deepen the already existing conflict in the region and turn it into a global concern. Russia is concerned about a "possible complication" of the situation if the U.S. recognizes Jerusalem as the capital of Israel, Kremlin spokesman Dmitry Peskov said Wednesday, as reported by Anadolu Agency (AA).

"The situation is complex," Peskov told reporters, and added that it was too early to comment on a decision that has not been made yet. He confirmed that Russian President Vladimir Putin and his Palestinian counterpart Mahmoud Abbas discussed the situation in a phone call Tuesday. U.S. officials said late Tuesday that Trump would recognize Jerusalem as Israel's capital, despite intense Arab, Muslim and European opposition to a move that would upend decades of U.S. policy and risk potentially violent protests. The sensitivity of the Jerusalem site comes from the fact that it is known to Jews as the Temple Mount and to Muslims as Haram al-Sharif. The site includes al-Aqsa Mosque, the third-holiest site in Islam, and the Dome of the Rock. It is also said to be the site of two ancient Jewish temples, the holiest place in Judaism. Israel began occupying East Jerusalem, which includes the holy area, during the 1967 Six-Day War.

However, the Waqf, a Muslim religious body, manages the Islamic sites in the compound.

China, which has good ties with Israel and the Palestinians, expressed concerns over "possible aggravation of regional tensions."

Pope Francis said he was "profoundly concerned" and appealed that "everyone respects the status quo of the city."

British Prime Minister Theresa May has said she would speak to U.S. President Donald Trump about the status of Jerusalem, which she said should be determined as part of a settlement between the Israelis and Palestinians.

"The status of Jerusalem should be determined in a negotiated settlement between the Israelis and the Palestinians."

"Jerusalem should ultimately form a shared capital between the Israeli and Palestinian states," the British prime minister said.

British Foreign Minister Boris Johnson, who had already expressed concern about the U.S. decision, on Wednesday said it was now time for the Americans to present their peace plan for the region. "Clearly this is a decision that makes it more important than ever that the long-awaited American proposals on the Middle East peace process are now brought forward," Johnson told reporters in Brussels.

French President Emmanuel Macron "expressed his concern over the possibility that the United States would unilaterally recognize Jerusalem as the capital of Israel" during a phone call with Trump Monday, Macron's office said after the two leaders spoke by telephone.

Trump's Mideast team, led by his adviser and son-in-law Jared Kushner, has spent months meeting with Israeli, Palestinian and Arab leaders. Details of their long awaited plan remain a mystery.

The decision over Jerusalem is undermining international stability, the leader of Germany's Social Democrats (SPD) said yesterday, as quoted by Reuters.

Affirming his support for a two-state solution for Israelis and Palestinians, Martin Schulz said Trump's decision, taken despite warnings from a wide range of U.S. allies, risked setting back the peace process in the Middle East.

Trump was theoretically due Monday to decide whether to sign a legal waiver delaying by six months plans to move the U.S. embassy to Jerusalem, as successive administrations have done at regular intervals for more than two decades.

The implications of missing the deadline are unclear. Lawyers have said there's some flexibility in the exact timing. Congress could withhold State Department funding for overseas facilities but is unlikely to do so. The Trump administration has blown through many other congressional deadlines without consequence in the past.

The harsh global reaction cast questions about the feasibility of a brewing U.S. peace plan that is expected to be presented by the White House in the near future.

In protest of the decision, hundreds of Palestinians demonstrated in the Gaza Strip yesterday.

"The Palestinian people will foil Trump schemes as they did for previous plans," Hamas leader Salah al- Bardawil told participants in the rally.

"We are here today to reiterate our rejection of U.S. decisions regarding Jerusalem," he said, going on to call on Arab countries to pile pressure on Washington to reverse its plans on the holy city.

He termed the U.S. move "total bias to the Israeli occupation."

Louay al-Qariouti, a member of the National and Islamic Forces bloc, called on Palestinians to rise up against U.S. plans regarding Jerusalem. "We also call on the umbrella Palestine Liberation Organization (PLO) to withdraw its recognition of Israel," he was quoted as saying in AA.

"There is no way that there can be talks with the Americans. The peace process is finished. They have already pre-empted the outcome," the AP quoted Palestinian official Hanan Ashrawi as saying. "They cannot take us for granted."

Iranian President Hassan Rouhani blasted Trump's plan to recognize Jerusalem as the Israeli capital on Wednesday, saying it would not be tolerated. Iran "will not tolerate a violation of Islamic sanctities," he said in a speech to officials in Tehran. "Muslims must stand united against this major plot."

Pakistan's ruling party has criticized President Donald Trump's plan to recognize Jerusalem as Israel's capital, saying it will ignite violence in the world.

Raja Zafarul Haq, chairman of the Pakistan Muslim League party, urged for speedy pressure on Trump to "refrain from complicating the Palestine issue instead taking steps to resolve it."