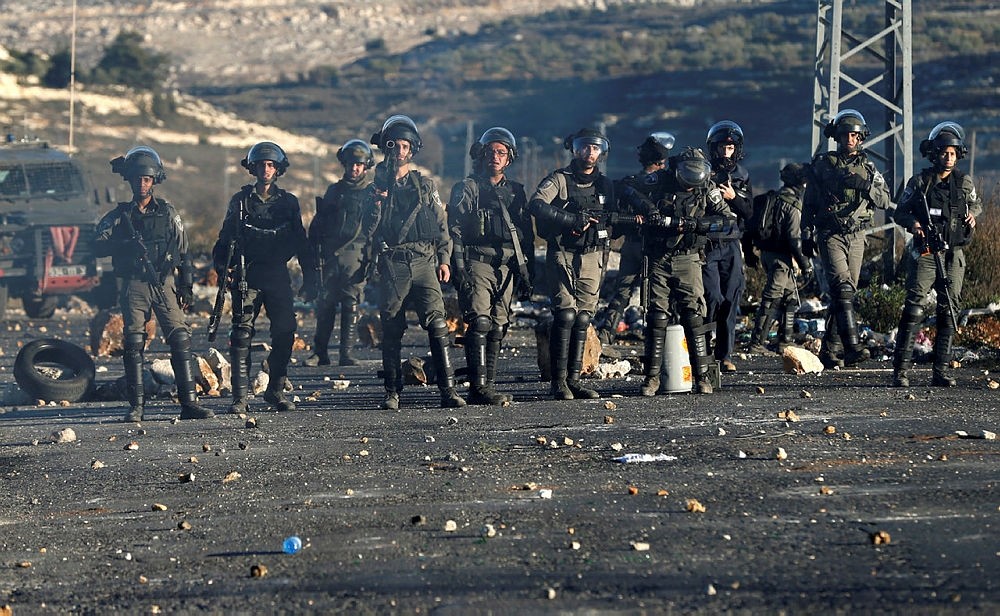 Israeli police officers take a position near the illegal settlement of Beit El, near the West Bank city of Ramallah December 8, 2017. (REUTERS Photo)
by Daily Sabah with Agencies Dec 08, 2017 12:00 am

Four Palestinian protesters were killed in Gaza and hundreds more were injured over the two days of protests in different parts of the occupied West Bank and in east Jerusalem's Al-Aqsa Mosque compound as Israeli security forces did not hesitate to use force, including using live ammunition and tear gas to disperse protests.

The health ministry confirmed Mahmoud al-Masri, 30, was killed in clashes along the Israeli-Gaza border. The second victim was also killed at the same location.

Two others were killed after Israel launched airstrikes on the Gaza Strip Saturday following a rocket fire from the Palestinian territory into southern Israel.

The Palestinian Red Crescent confirmed that over 300 Palestinians were injured in the protests.

Thousands of Palestinian demonstrators took to the streets after midday Friday prayer in the West Bank and east Jerusalem to protest the decision by U.S. President Donald Trump to recognize Jerusalem as Israel's capital, which has also received strong opposition worldwide.

Trump announced on Dec. 6 that the U.S. embassy in Tel Aviv will be relocated to Jerusalem, which will be recognized as the capital of Israel by the U.S. The international community has criticized the decision, saying it has ended the efforts to reach a two-state solution and the peace process.

Despite the ongoing criticism and protests in various parts of the world, Trump wrote on his official Twitter account yesterday that "I fulfilled my campaign promise-others didn't!"

The decision to move the U.S. Embassy to Jerusalem dates back to 1995 when the Jerusalem Embassy Act passed in Congress during Democrat Bill Clinton's presidency. However, Clinton and all of his successors until Trump signed a waiver every six months that suspended the law. During the run-up to the elections, Trump pledged to relocate the U.S. embassy to Jerusalem, which was seen as an effort to gain more votes in the elections.

In the West Bank city of Ramallah, hundreds of Palestinians marched from the city center to Israel's Bet Eil army checkpoint after Friday prayers.

In several instances, Israeli forces have responded to the protests with rubber bullets, live ammunition and excessive amounts of tear gas. Clashes between Palestinian protesters and Israeli forces have been reported across the West Bank, including the cities of Hebron (Al-Khalil), Bethlehem, Nablus, Jenin, Tulkarm, Qalqiliya and Jericho.

According to reports, more than two dozen Palestinians had been injured by rubber bullets, while at least 50 others had been subject to gas inhalation.

According to the Palestinian Red Crescent (PRC), at least one Palestinian was injured by live ammunition during clashes near the Al-Arroub refugee camp near Hebron.

"At least 72 others have suffered excessive tear gas inhalation across the West Bank, including 40 in the village of Kasra, while 21 more have been injured by rubber bullets," the PRC said in a statement.

In Jerusalem, meanwhile, hundreds of Palestinians marched from the flashpoint Al-Aqsa Mosque compound to the Bab al-Amoud (also known as the Damascus Gate), shouting slogans against the U.S. move and stressing Jerusalem's Arabic and Islamic identity.

During the Friday prayer in Al-Aqsa Mosque, preacher Sheikh Yousef Abu Sneineh said, "All we want from the Arab and Muslim leaders is action and not statements of denunciation," while condemning the decision by the U.S. president.

Around 2,000 people later gathered in the plaza around the mosque, chanting: "With our soul and blood, we will defend Al-Aqsa and Jerusalem."

The Israeli authorities Friday stepped up security in occupied east Jerusalem in anticipation of Palestinian demonstrations against the U.S. move.

The leader of the Palestinian resistance movement Hamas, Ismail Haniyeh called for a new intifada, Arabic for "uprising," Thursday, saying U.S. President Donald Trump's decision on Jerusalem was a "war declaration against Palestinians."

"We should call for and we should work on launching an intifada in the face of the Zionist enemy," Haniyeh said in a speech in Gaza. Haniyeh had said the Palestinian uprising against the move will start Friday.

The first uprising, intifada, was called for in 1987, which lasted until 1993, when the Israeli forces killed four Palestinians at a security checkpoint in Gaza. The first intifada was brought to an end in 1993 by the agreement, known as the Oslo Accord, between the Israeli government and the Palestinian Liberation Organization. As a result, the Palestinian Authority was set up and Israeli forces withdrew from the West Bank.

The second intifada was called for in September 2000 after a Palestinian boy was killed during clashes between Israeli troops and Palestinians in the Gaza strip, two days after a visit by Ariel Sharon to the holy site in Jerusalem (Haram al-Sharif), which had caused anger among the Palestinians. Palestinians were also discontent with the lack of maintaining the agreement reach in the Oslo Accord. While Palestinians say that the second intifada is still continuing, Haniyeh's call for a new intifada will mean a third uprising will be launched if all Palestinian groups agree to join the call.