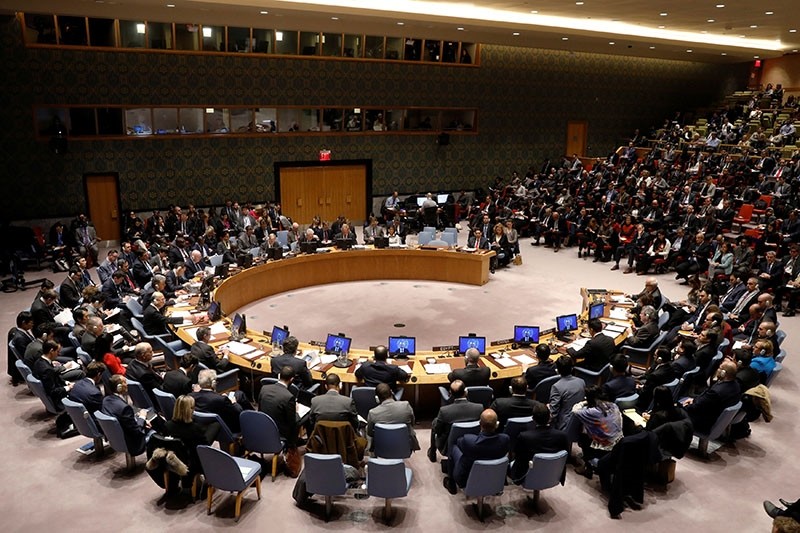 The United Nations Security Council begins a meeting on the situation in the Middle East, including the Palestine, at the United Nations Headquarters in New York, U.S., Dec. 8, 2017. (Reuters Photo)
by Compiled from Wire Services Dec 08, 2017 12:00 am

The United States stood alone Friday as one after another fellow U.N. Security Council member criticized its decision to recognize Jerusalem as Israel's capital.

The debate unfolded at a largely symbolic emergency meeting of the council — no vote on a resolution was planned, as the U.S. has veto power — two days after President Donald Trump reversed decades of U.S. policy on the holy city.

The meeting was convened by no fewer than eight of the 15 members of the council — the U.K., France, Sweden, Bolivia, Uruguay, Italy, Senegal and Egypt..

This seemed a vivid show of the discord triggered by Trump's announcement, which included plans to move the U.S. embassy in Israel from Tel Aviv to Jerusalem.

Asked what he expected to come from the U.N. meeting, one diplomat said: "Nothing." Another said the session would show U.S. "isolation" on the issue.

The U.N. coordinator for the Middle East peace process, Nikolay Mladenov, warned that the U.S. decision could lead to a spiral of violence among the Palestinians and others angered by what Trump has done.

The U.K. ambassador to the U.N., Matthew Rycroft, said flat out that Britain disagrees with Trump's move on Jerusalem and the embassy location.

"These decisions are unhelpful for the prospects for peace in the region," Rycroft said.

He urged Trump to now come up with detailed proposals for an Israel-Palestinian peace accord, a goal which has eluded the U.S. and the international community for decades.

Egypt's U.N. Ambassador Amr Aboulatta said the U.S. decision would have "a grave, negative impact" on the peace process.

Israel considers the city its undivided capital, but Palestinians believe the east is illegally occupied and see it as the capital of their future state.

That resolution was approved with 14 votes in favor and an abstention by former U.S. President Barack Obama's administration, which defied heavy pressure from long-time ally Israel and Trump, who was then president-elect, for Washington to wield its veto.

Five European countries on the council insisted the new U.S. policy is not in line with U.N. resolutions including one that considers east Jerusalem to be Israeli-occupied.

At Friday's meeting, U.S. ambassador Nikki Haley defended Trump as remaining committed to the peace process and a two state solution if the Israelis and Palestinians choose this.

Haley said that in his reversal of U.S. foreign policy, Trump was simply recognizing reality, since the Israeli government and parliament are located in Jerusalem.

And she recalled that Trump insists his decision has no impact on whatever Israelis and Palestinians ultimately decide on boundaries and borders of the city, which is holy to Muslims, Christians and Jews.

"I understand the concerns that members have in calling this session," Haley said. "Change is hard."